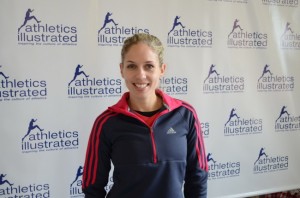 Thursday at 7:40 PM EST two of Canada’s best all-time distance runners will be competing in the 25-lap 10,000-metre race at the 2015 Toronto Pan Am/Para Pan Am Games. The race should prove to be very exciting to watch for all spectators viewing from home or live.

The top-five seeded women in terms of season bests all come to the track with those times as their lifetime personal bests too, all achieved during the same meet, the 2015 Payton Jordan Invitational. This indicates that they are all in the shape of their lives and their performances are directly comparable. Two other athletes have yet to compete at their best this season; however, they have very strong lifetime bests and should not be counted out.

Vancouver’s Natasha Wodak is seeded number one with her 2015 Payton Jordan Invitational performance of 31:41.59, this is the Canadian record. She also owns the national record for 8K on the road with her 25:28 performance from Victoria, accomplished in 2013. Wodak has run the second fastest half-marathon in Canadian history as well. She is a likely bet for a medal.

Right behind Wodak is Brenda Flores of Mexico, she is seeded number two based on her best performance of 31:45.16, meaning Wodak has already beaten her head-to-head in their best races, to date. Flores raced the 5,000m yesterday, finishing second in the time of 15:47.19 to Julia Dos Santos of Brazil who won in the time of 15:45.97. Will Flores have fully recovered from the 5,000m race? It is doubtful.

The third seeded athlete is Canadian Lanni Marchant of London, Ontario. She is the current national record holder

in the marathon with her 2:28:00 finish from the 2013 Toronto Marathon. Her half-marathon national record is 1:10:47 from Nashville in 2014. Since finishing five seconds behind Wodak at the Payton Jordan Invitational on May 2d, Marchant has prevailed over Wodak a couple of times on the roads. It will be interesting to see who is the sharpest in this race.

Ines Melchor of Peru dropped her times across the distances in 2014 and 2015. Her marathon is comparable to Marchant’s at 2:28:18 from April of this year, she would otherwise be competitive, but on Friday she ran at least through the half-way point of the Pan Am Marathon.

Liz Costello of the US is a consistent 32-minute 10K runner. Although she is not far from the top-three in terms of her personal bests, she has demonstrated little improvement over the past four years. She will be competitive, but the race would have to favour her running style specifically for her to be a medal threat.

Gladys Tejeda appears on the list of 10,000m competitors; however, on Friday she won the Pan Am Marathon in the time of 2:33:03 on a hot and humid day on a hilly course. It is highly unlikely that she is competing. If she does compete it is unlikely she will be recovered enough to stay with a field of athletes five of which have better 10,000m personal bests than her.

It has been a few years since American Desiree Davila (Linden) has run her best. Her range of personal bests from 5,000m to the marathon are all better than the entire field that she is facing Thursday. Thirty-two-years-of-age is still young enough to compete, no doubt, but she has not demonstrated the level of fitness that she will need to take on this field. Can the experienced veteran pull off a top-three position?