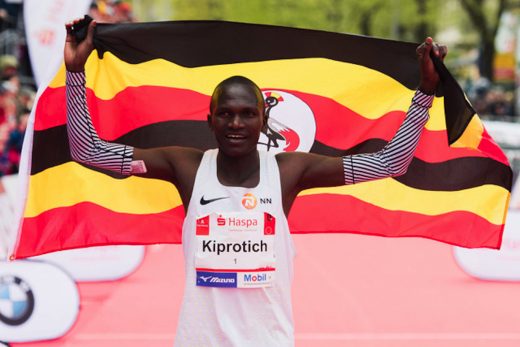 As he reflected a few hours after finishing runner-up to Ethiopia’s Tsegaye Mekonnen on his debut in the Haspa Marathon Hamburg on Sunday, Stephen Kiprotich was clearly a man who has quite a few years of top flight racing ahead of him. He had run 2:07:31 in difficult conditions, hail stones and rain sweeping in from the North Sea at times, losing by only five seconds on the run-in by a resurgent Ethiopian who had regained his winning form after two years of injury.

The Ugandan has climbed the twin marathon peaks already, winning the Olympic title in London in 2012 and the World Championship in Moscow a year later. His pre-race objective in Hamburg was to break his own national record of 2:06:33 and secure selection for another tilt at the world title in London this August. The government civil servant admitted that he wondered whether his Hamburg performance would be enough: “I don’t know, there are so many athletes and I don’t know if they will select me. They still have more athletes who are tougher than me.”

That was a surprising comment from a man who has twice proven what a winning competitor he can be in the marathon when it is racing pure and simple, no pacemakers provided and held during the peak of summer. Kiprotich provided a modest insight into the reason for his Olympic and World Championship victories: “I think it depends on the day, your preparations, all races are not the same, the distance is the same but the courses are different. For me, it was just my good day.”

Stephen Kiprotich turned 28 on the Wednesday before the Haspa Marathon Hamburg. He knows how to look after himself, praising the benefits of a sauna to ease race-weary limbs and had finished a deserved nap on Sunday afternoon before the interview. But sooner or later an elite athlete has to face the fact that they are no longer a contender. The Ugandan record holder has been giving this some thought: “Maybe when I stop in future – I am a government officer – I would do more of that and, on top of that, I would help upcoming athletes, give them tips on how to run a marathon and how to begin.”

He was the first non-Kenyan to win a men’s global marathon title for seven years when he won the Olympic gold in London in 2012. Uganda hasn’t come even close to emulating the conveyor belt of long distance talent that Kenya has been producing for the past four decades and it sounds as if Stephen Kiprotich would be fast-tracked for promotion in this management role, once his competitive days are over: “Where I work, our department supports sports and I am likely to be heading that department in future.”

In the meantime, it would be a big surprise if the Ugandan selectors failed to find a place in the World Championship team for London this summer for an athlete who relishes the big occasion.

More information about the Haspa Marathon Hamburg is available at: www.haspa-marathon-hamburg.de