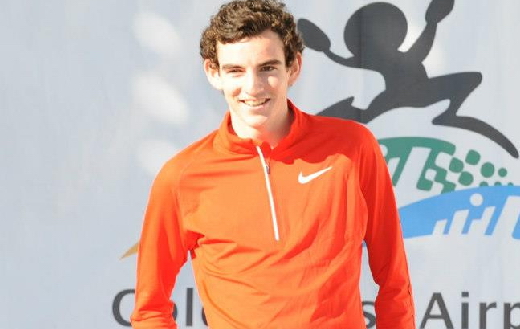 Cheserek was the favourite going in while Zienasellassie was considered by some as the most likely to defeat Cheserek. It appeared that neither Knight nor Tiernan were on the prognosticator’s radar, especially to go 1-2. Tiernan finished the race in 29:22, which represents a 5.3 second lead over Knight, who finished a whopping 20.7 seconds faster than Cheserek.

The native of Toowoomba who grew up playing and watching cricket, rugby and lawn bowling soon found his talent lies very much in distance running.

He competed in the 2016 Rio Olympic Games in the 5,000-metre distance event. He became the first student of Villanova University to compete in an Olympic event while still enrolled in school since Maddy Crimpen, a swimmer, competed in the 2000 Sydney Olympics.

Christopher Kelsall: Growing up in Toowoomba were you a fan of both Rugby Union and the National Rugby League (NRL)? Did you watch the Clydesdales as a kid?

Pat Tiernan: I was always an NRL fan as a kid, and would love watching the Friday night and Sunday afternoon games at home. I just felt they were so much more dynamic and energetic than the Union games, although I’ve now come to really appreciate Union as well as AFL. The Clydesdales would play on the Saturday, so that was like my bridge between the major games. I was also the sort of kid that would watch any sport that came on television. For example, after the Clydesdales’ game, the Australian Lawn Bowls tournament would come on, and I’d be glued to the television screen for the next two hours.

CK: Did it foster dreams in you of growing up to compete internationally in lawn bowling?

PT: Mate, I actually gave the sport a go one semester in high school. I tell you what; it is absolutely not as easy as it looks. I’d have to say my experience playing in high school demolished any ambitions I had of turning professional in the sport.

CK: Too much finesse! What are your thoughts on Rugby Sevens?

PT: I think it’s a great addition to the game, especially now that it is incorporated into the Olympics. I’m not too sure on how often it is played throughout the year, but I think it’s a great opportunity for the guys who aren’t quite as big as some of the props and forwards to show the world what they’re made of on an open field; very fast, very dynamic, and very exciting to watch.

CK: What sports were you playing in school?

PT: I played a lot of sports in school actually. Cricket was my first passion. I started playing that when I was around six years old, and continued right up until I was 17. Absolutely loved it, and still do. I also dabbled with soccer, rugby, field hockey, tennis, and basketball just to name a few.

CK: Like Rugby Sevens, with cricket do you enjoy watching Twenty20?

CK: What sports if any do your siblings Jack, Alexandra and Gabrielle play?

PT: Jack is very similar to me in that he has thrown his hand at a lot of sports, but he’s a runner himself, and not too shabby at that, so we’ll see how that pans out for him. Gabrielle and Ally played some Netball and Basketball in school, but I felt they were always more into the arts. Gabe is a brilliant pianist, and Ally has been involved in some big stage plays recently, so they are both excelling there.

CK: How did you come to find running as your primary sport, was there a defining moment?

PT: I won the Australian Cross Country Championships in the 11 years age group back in 2005, and that was when I started to realize that I was pretty good at it. I was still trying to excel at cricket though, as that was my original passion, but I’d say when I turned 17 was when I realized this was what I was going to be doing. I started doing a few road races and got to spend a lot of time with some of my best mates from back home through training and trips to races, so that was probably the point at which I realized that running was what I really enjoyed doing.

CK: At age 17 you ran that 30:34 in the 10K race as part of the Gold Coast Marathon and won. That is an auspicious performance. Were you surprised with the win?

PT: I was pretty surprised with that win actually. I went into it knowing I was in good shape, but it was also only my second 10km race on the road, so I was just going to see how the race panned out. I think Hugh Williams was second to me in that race, and he was somebody who I had lost to before, so it was a big result for me at the time.

CK: He is 2.5 years older and finished 10 seconds back. You ran a great race in Turku in June this year with that personal best of 13:20.88. What was the difference between that race and your Rio Olympic experience?

PT: I think the race in Turku was a situation where running around 13:20 would have been a big achievement for many of the people in the race. In Rio, everybody in my race had run 13:25 or quicker just in order to get there, so it was pretty ridiculous to be lining up against guys who would consider 13:20 to be a tactical race. Turku was a great confidence booster for me, as I was able to finish strong in a quick race, but racing in Rio made me realize how far I have to go in order to compete with the best. It’s something I’ll never forget.

CK: I assume most of that is developing the ability to drop the pace randomly by 10 seconds per kilometre a few times, to dip deeper into the anaerobic zone, yes?

PT: Most definitely. For me it’s more about being able to recover from a sudden drop in pace and be able to respond to the next change in pace. Marcus (O’Sullivan) and I have recognized that I wasn’t very strong in that area, and it’s been something we’ve been working on a lot over the last three to four months.

CK: Can you take me through your Olympic experience?

PT: Racing wise, it was a big learning curve for me that I’ll be looking back on until the next one comes around. The Games in general were a great experience. I got to meet a lot of new people in the village, and will hopefully bump into them again in the near future and make my presence more known. The city of Rio did a fantastic job I thought with the materials that were made available to them (from the best of my knowledge). The locals were very friendly, and all of the Games officials were very accommodating and helpful in assisting with any questions you had. I actually had my parents, youngest sister, an auntie, and one of my cousins over to watch me compete, so it was great to be able to share one of my greatest accomplishments with them.

CK: Regarding racing in the Olympic 5,000-metres compared to other meets, what is a big takeaway from the event that will advance your racing skill?

PT: Patience is the big thing that I took out of that race. I’ve always tended to get a little anxious in races and make my way to the front when I have felt the pace is too slow or that I’m in a sticky situation. I’m starting to learn to trust myself a little more in the closing stages of the race, and I think if you can have that confidence going into a race and during it, then you’re already giving yourself the upper hand.

CK: Cross-country is so different of course, how would you describe racing for the NCAA title and getting it. How did that feel?

PT: I think I executed well on the day, and incorporated the tools that I mentioned above during this race. Last year I would have got anxious at 4km and made a bold move to the front. In another extreme I could have tried to wait until the final straight to make a move. Both of those situations would not have played into my favour. I slowly picked up the tempo from about 6km into the race until a mile to go, and then made another increase in pace. I just gave myself the best chance I could to win the race on the day, and fortunately came out on top. It was a great feeling though, achieving something that has been just out of reach for a little while, so it is something that I am very proud of.

CK: What do you have to say about young Mr. Justyn Knight finishing second? Did he put the scare into you at any point?

PT: Most definitely. Justyn is a great competitor, and I know how talented he is, so it was quite nerve wracking having him breathing down my neck in that final straight. We’re good mates though, have been for a couple of years now, so it was great to see him coming across the line right behind me. Probably one of the biggest talents in the NCAA across all sports, and just generally one of the nicest blokes you will ever meet, so look for him to be making some big marks in the coming years.

CK: Can you describe a typical training week in season as well as your base period?

Wednesday: AM – 30 minutes + strength and conditioning

CK: Now that you are finishing up your time at Villanova, will you move back to Toowoomba? Will you continue to race the 5,000-metres?

PT: I’m heading back home for the Australian 10,000m Championships in Melbourne next week, and then will take some down time and spend Christmas and New Years with family and friends back home. I will be returning to the US to continue training with Marcus for at least another year though, as I believe we still have a lot to build on. As far as racing, I’m hoping to stick with the 5,000m for a little while yet, but I will dabble with the 10,000m as well to see what is working best. I would love to race some shorter distances as well at some point, but those two will be my focus.

CK: Will you be competing in the world cross-country and world track and field championships?

PT: The goal at the moment is to compete at the World Championships in London next year, either in the 5,000m or the 10,000m. I will be putting my hand up for selection to the Australian team for the World Cross Country Championships, so I just have to wait and see whether they will select me in that team or not. Both would be a fantastic experience for me, and hopefully this time around I can make the final.