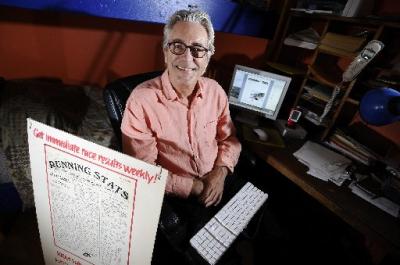 Paul Christman, author of the novel The Purple Runner is releasing the long-awaited second edition.The Purple Runner, as far as running-themed novels go, is one of the top three or four stories that speak to serious runners in the language that is accurate and captures the essence of daily training and the runner’s life. The Purple Runner is likely to sit on a runner’s bookshelf in between the famous Once a Runner by John L. Parker and the Loneliness of the Long Distance Runner by Alan Sillitoe.

The story takes place mostly in London, England however, the tapestry of characters is made up of an eclectic bunch who hail from the U.S., New Zealand and Great Britain. The mysterious runner in purple is an intriguing and mysterious character who runs at an unearthly pace. A femme fatale from New Zealand moves to London while she tries to sort out her running career. There is the proverbial American lawyer, a good guy from Hollywood looking to go sub-three and one of them gets knocked off. There is a love story of course and all of this is weaved in an unexpected fashion, where they all compete in the Greater London Marathon.

Paul Christman, lived the runner’s life in Colorado. He hung around with and ran with the top names during the 1980s. He operated a business for years – before the internet took over – providing running stats by fax, phone and mail to subscribers. His mailing list was a whose who of running. He also contributes articles to magazines, such as Running Times and teaches English. Currently he is promoting the second edition of The Purple Runner.

Christopher Kelsall: Did you grow up with plans to play College or NFL Football like your father?

Paul Christman:  No. Getting asked if I played football became tiresome. I knew trying to duplicate his efforts would be too difficult and wanted to carve my own niche. On the other hand I tried my freshman year of high school as an end. I was 5’10” and 148 pounds, with no speed, and got knocked around a lot. A year later I was 6’2” and 192 pounds when I went out for swimming. I should have gone out for football that year.

CK: In regards to your business Running Stats, which you closed in 2007, did you think about moving towards using the internet, or was the service already being offered by others at the time?

PC: We had both an e-mail and internet edition. Neither ever had substantial circulation although I sold it on the basis that many of the movers and shakers in media, other publications, race directors, agents, athletes, etc., read it. In the third millennium more and more electronic publications were joining the internet and issuing daily not weekly information. The need for Running Stats diminished greatly, and I found selling advertising rather than formerly attracting sponsorships unsuccessful.

CK: Without giving anything away, what areas of the book did you “improve” with the new edition?

PC: The story is essentially the same. Some grammatical improvements were made to sort of make is more readable for an American audience. 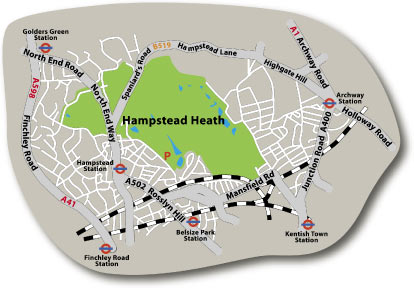 There are a few deletions, but essentially it is a period piece from the early 80s. Originally I had spellings and idioms depending upon the characters involved, British or American or New Zealander. However my editor argued and won for consistency in spelling.

CK: Perhaps for the new edition, just add a boy wizard on a broom.

PC: I tried reading the Hobbit when I was young. Yet since then I have never completely read or watched most of the fantasy character books and movies that interest young people today. No wizards, werewolves or vampires for me. I have seen a Spiderman and enjoyed it.

CK: I understand that “Chris” was somewhat an autobiographical character. If so, why did you kill him off?

PC: I killed him off to create a reason for ‘the runner’ to enter the Greater London Marathon. Creating some guilt, as it were.

CK: So did Chris embody some autobiographical aspects? If so, did his death coincide with any major running decision that you made at that time?

PC: Nothing autobiographical. I was in perfect health. Yet I needed a motivation for The Runner to change his mind and enter the Greater London Marathon.

CK: The homeowner, I believe Patrick Doyle, was he a combination of known coaches?

PC: No, he was based on a guy in my club—who didn’t have body odor by the way, although he did in the book—the Highgate Harriers.

PC: Solian D. Lede is an anagram for Allison Deed, Roe’s maiden name. Tika Bernheinns is also an anagram of a famous British runner at the time.

CK: I will let the readers sort out who Tika represents at least as an anagram. Was purple a symbol or motif of some sort? What was the significance of the colour?

CK: He wasn’t Steve Prefontains though, so was the runner with the disfigured face a few known athletes rolled into one?

PC: Yes, the original idea was that Pre hadn’t really died but had merely been disfigured. Dick Quax suggested that his parents were still alive and may not appreciate the obvious comparison. Then I made ‘the runner’ an unknown who might be Pre, Gerry Lindgren (who had disappeared and was still missing at the time), or another unknown runner.

CK: Initially, what inspired you to write this story?

PC: Living abroad for a year in the country for which cross-country running is so much a part of the youthful culture inspired me, as did living in The Elms, on the Hampstead Heath seen on the book’s map. Plus I’m a great believer in the sub-two-hour marathon. Will a sub-two occur? Of course. Just as those who erroneously thought the sub-four-minute mile was impossible and it’s now 3:43. The sub-two-hour marathon performance will occur, it’s merely a question of when.

CK: Do you think the sub-two hour marathon will have nearly the impact in the media that the sub-four minute mile did?

PC: Absolutely. And of course, once it occurs other sub-two performances will follow and the time will drop into the high 1:50s. For the USA or Britain it would be great for indigenous media if a citizen were the first. But a more likely scenario at present will see a citizen of the Rift Valley.

CK: Are you writing a sequel to The Purple Runner? Doing so would mirror the timing of John Parker’s, Again to Carthage to Once a Runner.

PC: Not writing a sequel yet, but may do so in next year or two. Have a lot on my plate right now with other writing projects and promoting The Purple Runner.