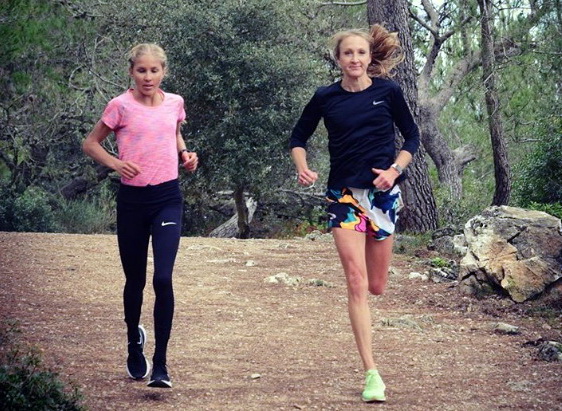 It has been widely reported that Jordan Hasay has hired former marathon world record holder Paula Radcliffe as her coach or coach advisor.

This is not exactly accurate according to Radcliffe.

She told Athletics Illustrated, “I am happy to help Jordan out as well as I can. It’s not an official coaching role since I am not actually qualified to coach but primarily, I also don’t have the time to travel full time as a coach while my kids are still young and my priority.”

Hasay was formerly coached by Alberto Salazar of the Nike Oregon Project. Since Salazar has received a four-year coaching ban for apparent doping-related offences, his athletes have had to find new coaches.

Hasay, who is knowledgeable about training and what she needs to do to get ready for racing, has chosen Radcliffe more as an advisor.

“Jordan completely understands this, and my role is more of a mentor/advisor than a coach. She is very smart and already knows very well what works for her, and what doesn’t really work. She is also open to listening to ideas and changing things when she sees the sense behind it. A lot of the basis of what she already does is very good, and the changes so far are agreed by both of us and are very fluid.”

Hasay owns the second-fastest marathon by an American, all-time, behind only Deena Kastor, who ran the 2006 London Marathon in the time of 2:19:36. Hasay has gone as fast as 2:20:57, which the 28-year-old accomplished in Chicago two years ago.

Hasay dropped out of the 2019 Chicago Marathon due to a hamstring issue, which found her walking through the 5K mark in over 22 minutes. She was going for Kastor’s record in that race. She has recovered now.

“She came over to stay and we chatted and worked out a lot of things going forward. We feel that we can make this work long-distance with someone on the ground training with her in workouts and providing constant honest feedback between. Of course, in the future we will aim to do some training camps together, but it is very flexible right now,” added Radcliffe.

Radcliffe owned the marathon world record until Oct this year. She set the record at 2:15:25 in London 2004. The record stood until the same Chicago race where Hasay dropped out. Kenyan Brigid Kosgei crossed the finish line in the remarkable time of 2:14:04.

Her connection to Hasay may be from her husband’s (Gary Lough) connection to Salazar as both have coached multi-time worlds and Olympic gold medallist Mo Farah, who trained with the Nike Oregon Project as did Hasay.

“I have known her for a while now and got to know her better in the last couple of weeks,” shared Radcliffe. “I am really impressed with her mental strength and ability to focus on what is important. We have similar outlooks on a lot of things, training, competition, and lifestyle-related and I admire her style of racing and think she still has a lot of progress to come. The main thing now is getting fully healthy and as fit as possible by the trials.”

On February 29, 2020, Americans will take to the streets of Atlanta, GA to compete in the 2020 Tokyo Olympic marathon trials.

Apparently 341 women and 181 men have run the trials qualifying times.