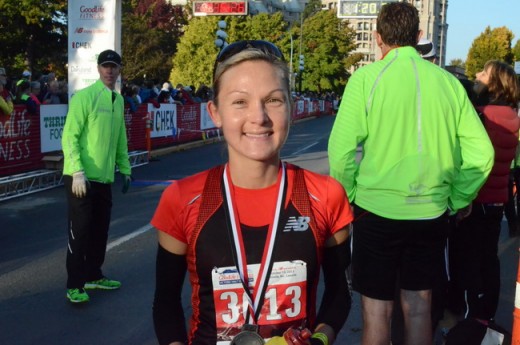 The first-ever Athletics Illustrated Person of the Week honour is awarded to Hilary Stellingwerff, for the week of April 13, 2020. On Wednesday, the 15th she officially starts her position as head coach of the men’s and women’s track and cross-country programs at the University of Victoria.

For now, Stellingwerff earns the Person of the Week honours for landing her permanent position as the seventh head coach of the University of Victoria Vikes track and cross country programs.

Although it was officially announced by the university earlier this week, and one year into the position on an interim basis.

To get the position, she started out first as a volunteer assistant coach under the long-running Head Coach Brent Fougner. She spent six years under his tutelage before being selected from the recruitment process by the university. She is also the mother of two boys under age seven, Theo and Willem.

“I am so happy to have Hilary be appointed to the head coach position at UVic. It has been a pleasure to work with her these past six years as my assistant coach. She has all the assets necessary to lead student-athletes in balancing their high performance and personal growth.  I look forward to supporting her going forward as an alumni and former head coach,” shared Fougner.

Stellingwerff is a 2012 London and 2016 Rio Olympian specializing in the 1500-metre distance. During the 2012 event, she made it to the semi-finals. She was prevented from making the finals by athletes who would later test positive for performance-enhancing drugs. Half of the field in the finals eventually tested positive.

It was an opportunity missed but completely outside of her control. With the perfect timing of a peak orchestrated by her coaches Dave Scott-Thomas and husband Trent, she executed well.

But it all started in Grade 3 after her teacher told her that she could one day go to the Olympics – after she beat all the boys in gym class.

Stellingwerff is a 10-time Team Canada member, two-time Olympian and eight-time medallist at the national track and field championships.

She has also competed in the World Athletics (IAAF) Championships in track and in cross-country.

She grew up in Sarnia, Ontario and later ran for the legendary Wisconsin Badgers. She and Trent moved to Switzerland, while she trained and he worked as a research scientist for Nestle. They eventually settled in Victoria, BC and have made the city their home since 2010.