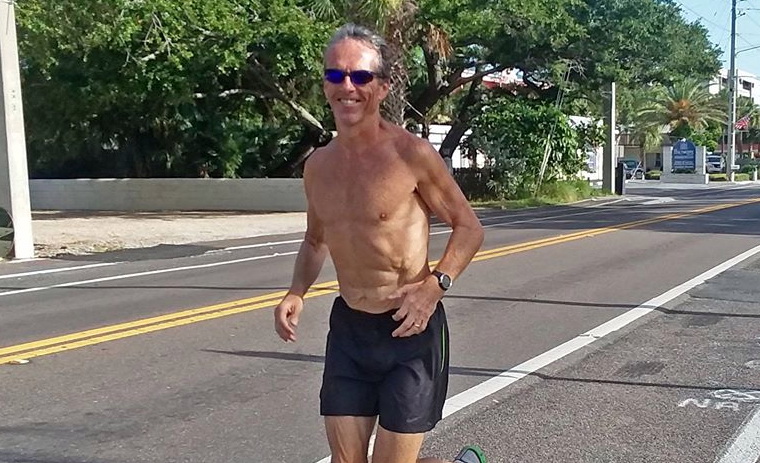 The Athletics Illustrated Person of the Week honour for the week of May, 25, 2020 is awarded to American runner Dave Whiteside. Whiteside has been training hard and long, which is remarkable considering he is age 60 with a hip replacement. Even more remarkable was his 200-mile/321-kilometre training week, last week – stunning.

Dave Whiteside of Indian Rocks Beach, Florida is the Athletics Illustrated Person of the Week for the week of May 5; Memorial Day, in the US.

Whiteside is a long-time runner who had total hip replacement surgery. He earned the Person of the Week honours for two reasons: 1. He temporarily led the Hip Runners running club during the Global One-hour Virtual Race (3rd on team), while on tired legs. He ran a total of 13.40 kilometres in the hour. The Hip Runner that ran the most was Tom Fuchs at 14.01K at age 54. The performances are close.

The Hip Runners team led the team’s race during the event for one week, before being overtaken by the Vancouver Island-based Comox Valley Road Runners, who were taken down at the 11th hour by the rival Prairie Inn Harriers of Victoria, BC. Details of the event are here>>

The following week, Whiteside completed a 200-mile (321K) week of training. Remember, he had a hip replacement.

“I can’t believe I’ve just run 200 miles in the last 7 days and also walked 15 miles on top of that. A friend of mine ran that distance two weeks ago and he said why don’t I do it? I thought about it and said no way, the maximum I thought I could ever do was 140,” wrote Whiteside in his blog entry at Hiprunner.com.

While some surgeons do not recommend any running whatsoever, some allow it. Running long term with an artificial hip is undocumented territory. What Whiteside will be providing with his high-mileage training is information on the longevity of the mechanical prosthetic implanted in his femur.

“Yesterday when I was running I knew back to back 42’s was going to be really tough both mentally and physically, so I decided to run 50 miles yesterday so it would only require me to run 34 today, so much easier. My usual weekly mileage is around 45 miles, but during this pandemic it’s been higher around 70 miles.”

This is not his only honours for his high mileage training. He also enjoys time on his ElliptiGo and promotes the running simulation that it provides with his posts at Hip Runner’s website.

ElliptiGo gave him the Rider of the Month for May.

About Person of the Week