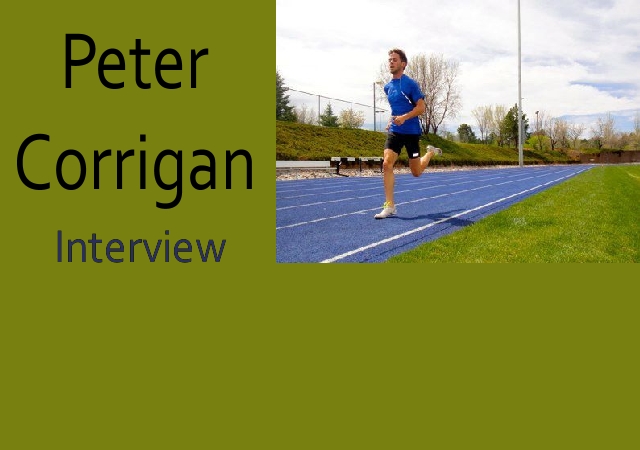 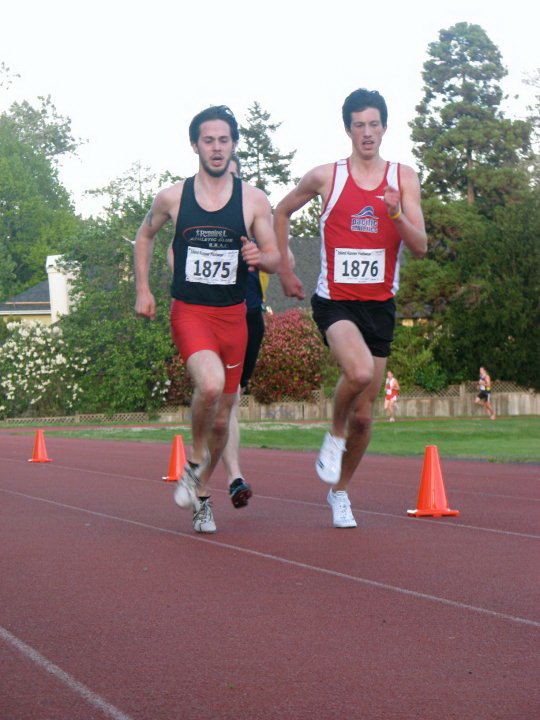 Twenty-three year-old Peter Corrigan from Calgary, Alberta will be racing this spring and summer to improve his 1500m times and perhaps as a stretch goal run the “B” standard qualifying time for the 2012 London Olympic Games. He has just over two weeks to make that happen as well as finish top-three at the Canadian Olympic Track and Field Trials. The trials are are taking place in his hometown of Calgary from June 27th to June 30th.

He is a one-time member of the Dalhousie University team who spends part of his year training in Scottsdale, Arizona. Currently he is in Canada to take in the National Track League. Next up is the Victoria Track Classic, June 13th at the University of Victoria’s Centennial Stadium.

PC: Because it’s very long. In all fairness I have never done one on the track, but I don’t imagine it to be a ton of fun. I’d be fine with the 5k. I actually kind of enjoy 12.5 laps.

CK: The Revolutionary Thomas Paine (ironic name, I know) said, “the harder the conflict the more glorious the triumph.” That in itself should be reason enough to run 25 laps; to attempt triumph.

CK: Having spent a few years in Kamloops as a child, were you following the careers of Dylan Armstrong and Gary Reed back then?

PC: Definitely. Neither of them had quite found their specialty before I moved away from Kamloops. But even so, everyone knew they would both be something special. Kamloops was full of fantastic track athletes, you can add Shane Niemi to the list. He was equally inspiring to watch. It’s kind of cool to look back and see how many world class athletes came out of such a small town.

CK: Were you surprised by Reed’s early retirement?

PC: Not really. Being around him you could see it coming. He had already had a long and very successful career, plus a wife and now a kid. It’s hard to try and have a “normal” life living the way we do. I think he just wanted a little more stability and consistency.

CK: Are you training full time in Scottsdale, Arizona now? You enjoying yourself?

PC: I spend about four to six months down in Scottsdale. I love it down there. You can’t ask for a better environment for full time training. Average day includes; run, ice bath in pool (they aren’t heated and perfect in the “winter” for icing), nap, lay by the pool, run, sleep, repeat. Can’t really beat it.

CK: Like a Kenyan except for the ice bath part.

CK: What level of mileage volume do you get into during the winter?

PC: I’m not one to hit huge mileage. I think my highest week was about 95 miles. I have been building consistently over the last couple years, and will continue to do so.

CK: So your mileage that you are increasing each year will move you more into the 5,000 and perhaps 10,000m distances then?

PC: Yup, and even in the 1500m. A little more strength never hurt anybody.

CK: I understand you are racing in the Donovan Bailey meet in Edmonton and (did) Harry Jerome in Vancouver, are you doing any other National Track League meets?

PC: I am entered in every meet in the league. I did them all last year as well and really enjoyed it. I was excited to see that Hub City was added this year. They did a great job with their meet last year. They definitely deserved to be added in.

The NTL is a great series, and the thing I like most about it is that it’s in Canada. I wrote a couple blogs awhile back about things that I think could be improved in our sport. One point I made was having big names go head to head more often. The NTL is a great medium for Canadian top guns to go up against each other often, and on home soil.

CK: And you are mostly running 15s? Any 5000m in the National Track League?

PC: All 1500s except in Edmonton, I’ll be running an 800. I haven’t done nearly enough 5k work lately to even think about trying one right now.

CK: What are your immediate 1500m time goals?

PC: You know, I don’t necessarily have certain times I want to run. My “C” carding standard is 3:40.50, I’d like to get under that. I’d also like to hit an Olympic “B” standard. However, in the past few years I’ve really tried to throw out thinking about time standards and just get back to basics and worry more about beating as my people as I can. Getting into races that I am now, if I focus on that, the times will come naturally.

CK: Can you please re-cap your performance at the Harry Jerome Track Classic this year?

PC: In the past, Jerome has been one of the best races of my year. Unfortunately, this year did not follow suit. I don’t really know what happened to be honest. I think I pumped this race up in my head, by trying to not pump it up at all. I just said to myself that it was going to be fast and as long as I just raced my race, kept contact and finished strong I’d be pulled to a fast time. I got too caught up in racing my own race and forgot the race the one that was on the track. I ended up running 3:44.70. I can’t complain too much, before this year that would have been my 3rd fastest all time, and currently my 6th fastest. I just have to have a bad memory and move on to the next one. Which will be Victoria in a couple days.

CK: Are you in the Canadian Olympic Trials June 27 to 30th?

PC: Yup, wouldn’t miss them for the world. I grew up in Calgary so it’s nice to be able to get out there and do what I love in front of a hometown crowd. Plus being an Olympic year, you never know what can happen.