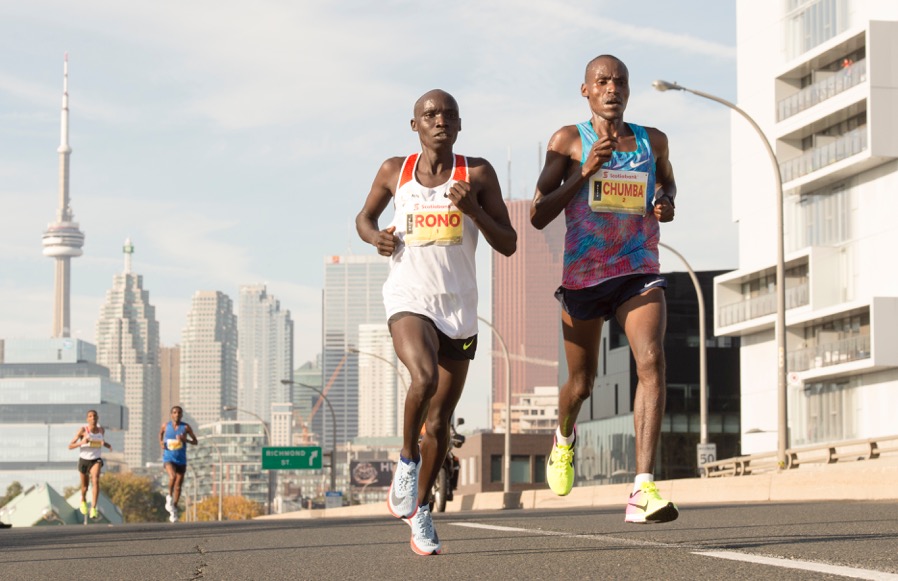 Only his countryman, Kenneth Mungara, has enjoyed more success in Canada’s biggest city winning four times (2008 – 2011). But Rono made further history a year ago when he also ran the fastest marathon ever on Canadian soil. His time of 2:06:52 was also a personal best.

Despite his rapidly increasing value on the running circuit and, with it, a growing number of invitations from marathons across the globe, there was little doubt that he would return to Toronto.

“I’m very happy to come to Toronto again,” said Rono, now 27 years old and remembering the euphoria he experienced on his last visit.  “What comes to my mind is that it was a nice race (last year) because I set my personal best and it was a good chance for me. I took the lead between 32 and 35K and I said to myself ‘today is my day’ and I felt good.

“I met friends there from Kenya – they came from many different places in Kenya – and we went to a shopping mall (two days before the race). There are a lot of nice buildings and roads in Toronto.”

Although he is one of the few elite athletes to venture well outside the hotel – apart from race duties – he had other reasons to be delighted with the occasion. Setting a Canadian All-comers record earned him $50,000 CDN in addition to his $25,000 CDN first-place prize money.

Like many of the world’s best marathoners, Rono prefers to race just two marathons a year.  Although he started Boston in April the dreadful conditions put paid to his plans there and he failed to finish. That might well prove to be a positive development in his buildup to Toronto. Now his focus is completely on getting his Toronto hat trick.

“It is important for me to want to write history to become the man to win three consecutive Toronto races and to set a course record again,” he reveals. “Yeah, it’s possible to run faster because if the weather is good then, maybe, another ‘PB’.”

The diminutive Rono is nicknamed ‘Baby Police’ due partly to his youthful face and the fact he is also a policeman in good standing with the Kenyan police force. During the off-season, which, given the fact he will run both a spring and autumn marathon constitutes only November and May, he reports to his superiors in the force, although he is first and foremost a marathoner now.

Under the direction of coach Patrick Sang, himself the 1992 Olympic silver medalist in the 3000m steeplechase, Rono has thoroughly blossomed. Sang’s training group includes a large group of elite marathoners represented by Netherlands based Global Sports Communication, including reigning Olympic marathon champion, Eliud Kipchoge. They are also members of the NN Running Team, a unique professional group sponsored by NN, an Insurance and asset management company.

The Kenyan contingent trains in Kaptagat, an area lying at 2,400m (7,900 feet) above sea level, rising to 2,800m (9,200 feet). Here they spend five days a week in the Global Sports camp in rustic conditions, two athletes to a hut. Rising at 5:30 a.m. each morning they have a cup of milky tea before heading out for their morning training sessions on local dirt roads.

Another training partner is Laban Korir who prepped Rono for his Toronto Waterfront debut two years ago telling him details of the course and weather conditions. Korir was the 2014 Toronto champion and finished 3rd in 2015. But it is Kipchoge whom every athlete in the camp reveres the most.

Although the focus is training in the off hours the runners enjoy spending time together.

“There is a television at the camp and we watch football,” he explains. “I am still a Chelsea supporter. In fact, I was watching this (Chelsea) guy N’Gola Kante from France playing in the World Cup final. I was praying for France to win the game.”

The athletes spend the majority of their time away from family and Rono, who is married with an infant son, has purchased farm land which he calls home. Farming is in his blood. He grew up on a farm in Marakwet region high up in the Great Rift Valley.

“My family they understand me,” he says. “We sacrifice a lot. If there are some small issues maybe I will go home in the middle of the week.

“My parents are far from me. I live with my wife on the farm. I have cows, I have sheep. I grow maize and potatoes. Sometimes we go out but usually when I am around (the farm), I go and feed the cows and stay around there and play with the kids. I have one boy.”

Rono’s plans for a post-athletics future are quite apparent but he has perhaps another five years of top class marathoning in those legs.