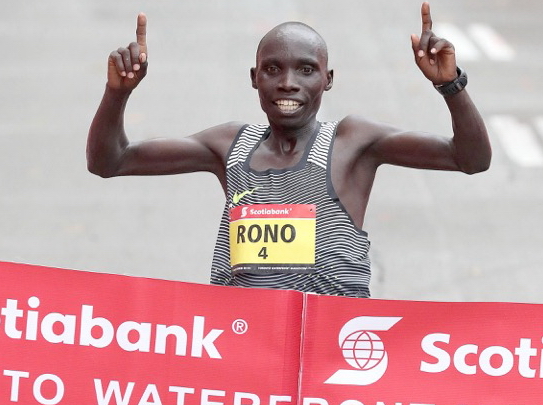 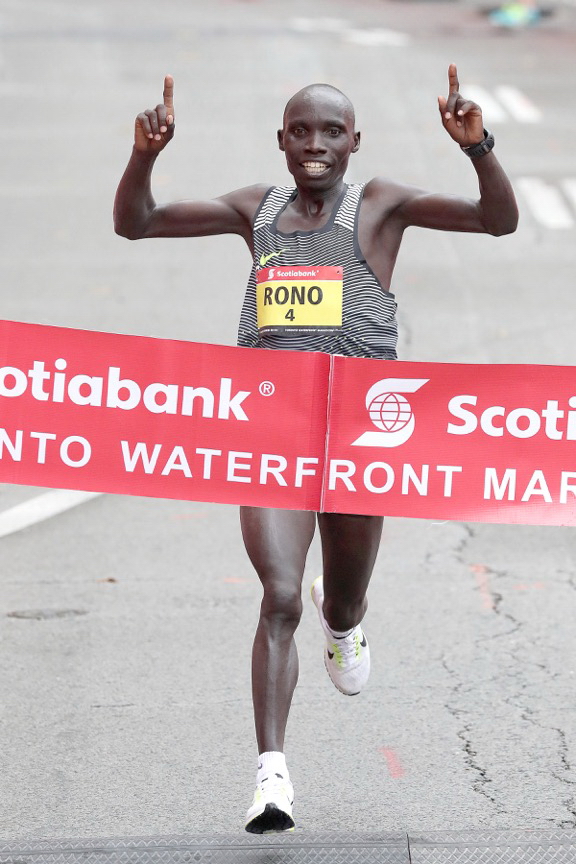 A year ago Kenya’s Philemon Rono overcame a world class field, humid conditions – not to mention a collision with a traffic barricade – to capture the Scotiabank Toronto Waterfront Marathon in a time of 2:08:27.

It was a remarkable achievement and one that was madly celebrated upon his return to Kaptagat in Kenya’s Great Rift Valley.

“There was great joy,” he recalls of being reunited with his training group back at the Global Sports training camp.  “We celebrated together and everybody was happy for me. Laban Korir was happy that the victory came back to Kaptagat.”

Now Rono has announced he will return to Toronto Waterfront to defend his title in this IAAF Gold Label race (October 22nd).

Amongst his training partners, Toronto is spoken of in respectful terms. Korir it will be remembered was the 2014 Toronto champion. It was he who had encouraged Rono to race in Canada’s biggest city after his own success there.

“I started training (for the 2017 Scotiabank Toronto Waterfront Marathon) in June and my training is going along well,” Rono reveals. “I am just focusing on a great achievement. If the weather is good I will run my personal best. I am very excited to come back as I really enjoyed the race.”

Rono has a personal best of 2:07:07 recorded at the 2014 Hamburg Marathon. A year ago he also ran 2:07:20 in Hamburg while finishing second. The Scotiabank Toronto Waterfront course record remains 2:07:05 by Ethiopia’s Deressa Chimsa (2013) and there is a C$40,000 incentive for beating that time.

During his warm-up last year Rono managed to pull over a barricade that he was using to stretch against, it came down on his forehead and rendered him briefly unconscious. For a few frantic minutes his management consulted by overseas telephone on whether to allow him to run or not. The decision was taken to let him see how he felt during the first couple of kilometres. As we now know, he quickly recovered and was grinning ear to ear following the victory.

Rono is currently back at the Global Sports camp training with some of the world’s greatest runners. His roommate is Brimin Kipruto (2008 Olympic 3,000m Steeplechase champion). But the most famous training partner in the thirty-man group is the reigning Olympic marathon champion Eliud Kipchoge, who has had a profound impact on Rono and the others.

“He taught me to focus on what you want to do and want to achieve and to be disciplined,” Rono explains. Prior to his Scotiabank Toronto Waterfront Marathon debut Kipchoge had told Rono he believed he would win Toronto. “I want to be like him.”

“Mostly I stay there in the camp from Tuesday until Saturday full time. On Sunday and Monday, I go home. I go home after the speed work on Saturday morning. I am married.”

Each athlete has specific duties and shared responsibilities. Rono, for example, is the camp treasurer and collects money from the others when necessary. When one among them has success somewhere in the world there is normally a celebration. This camaraderie has been responsible for numerous champions.

There is a vegetable patch which is tendered by the runners and they also have acquired some cows. And, they all ensure the camp stays clean which means rolling up their sleeves in various odd jobs – cleaning the outhouse included. A full-time cook prepares a balanced diet when the group is in camp.

The group is coached by the illustrious Patrick Sang, who won an Olympic silver and two World Championship silver medals for Kenya back in the 1990’s. His influence on the group is extraordinary from creating a tight relationship within the group to scripting their individual programs.

“Training starts at 6 am, Eliud is the one who wakes us every day at 5.45 am.,” Rono says. “After training we take breakfast (chai and bread), then we relax until lunch and around 4pm we go for a recovery run.”

During the evenings, when there is some time for relaxation the athletes enjoy watching athletics, professional wrestling and soccer on television. Rono is a huge fan of Chelsea Football Club he says. While training for the marathon takes up most of his time he is also a member of the police force and reports for duty during his off season.

In the buildup to Toronto Waterfront he will continue training hard with his teammates. He will test himself with a half marathon race sometime in September and determine where his fitness lies. Earlier this year he ran 2:09:22 in Rotterdam finishing 8th. But there is much more on the line as defending Toronto champion.

Though he is still just 26 he sees himself running for another ten years and has dreams of following Kipchoge’s path.

“My dream is to run a time under 2:04,” Rono declares with confidence.  And once his competitive career comes to an end he has other plans.“I hope to be a coach in the future. But first I will focus on my athletics career.”

With the experience gained from racing and winning Scotiabank Toronto Waterfront Marathon a year ago, Philemon Rono will certainly be one to watch when the elite racers line up come October 22nd.