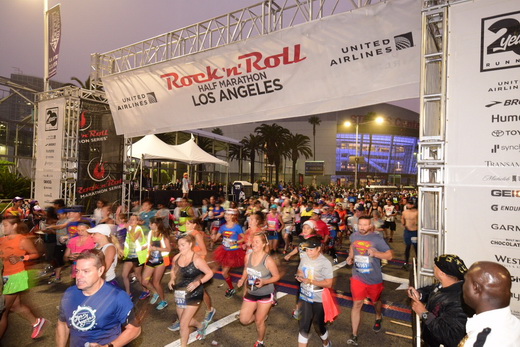 The “City of Angels” put on a divine show at the United Airlines Rock ‘n’ Roll Los Angeles Half Marathon and 5K on Sunday.  Thousands of runners, many dressed in costumes of all shapes and sizes, toed the scenic start line downtown to take part in the largest Halloween half marathon. The weather couldn’t have been better for this iconic race with temperatures in the high 50s at the start. A thick fog covered much of the course, upping the “spooky” factor as costumed runners ran along L.A.’s iconic boulevards and byways.

A group of elite runners cut through and battled for a podium finish. The first person to cross the finish line on the 13.1-mile course was Phillip Reid of San Luis Obispo, California. The 31-year-old champion clocked one hour, five minutes and 51 seconds. Not far behind was second-place finisher, Sergio Reyes who was a mere nine seconds behind. Third place was awarded to Isidore Herrera (1:06:32).

“I felt really good,” said a smiling Reid afterward. “It was a great course. It was well marked and well organized.” Reid and second-place Herrera wore the same singlet belonging to the Hoka One One Aggies Running Club. “Sergio is a good friend of mine—a good buddy,” Reid said.

Besides the stiff competition from a fellow teammate, Reid says he also recalled the final band along the course. “They were playing Red Hot Chili Peppers,” he said. “I love them. They are the ultimate L.A. band. I’ve seen them a bunch of times and, so it was a great motivator.” After this win, Reid noted that he will focus on cross-country running—specifically the USATF Club Nationals in December.

The women’s half-marathon was not as competitive with Lauren Floris of Chino Hill, California dominating in 1:18:40. Floris led from start to finish and managed to run with a pack of four men to help her along the way.

“The first half felt flat and fast,” she recalled afterward. “It was great to kind of get in a groove with them.” Floris literally gave it her all as she sprinted to the finish and got sick in the final 100 meters. “I really wanted to break 1:18:00 so I could qualify for the U.S. Championship section of the California International Marathon,” she said.

Floris said that the bands and cheer zones were positioned perfectly, especially in the hillier sections, to give runners such as herself a good boost of energy. “They were really fun,” she said. The 27-year-old hopes that Sunday’s win will position her nicely for the forthcoming California International Marathon in December.

All the action in Los Angeles on Sunday wasn’t limited to the half marathon, however. A 5K was held in conjunction with 26-year-old Simon Schmidt dominating in 15:24. Joe Neuenfeldt (18:15) and Ricky Segura (18:45) took second and third respectively. Amanda Steffy was the women’s champion (18:56). Her nearest rival was second-place finisher Elizabeth Scott (19:15). Third place in the 5K went to Angelina Vasquez (20:30).

After the awards ceremony, Los Angeles-based singer and songwriter Theo Katzman who took to the stage and performed for the runners and their friends and families. Sunday’s fun concluded with a Halloween costume contest.