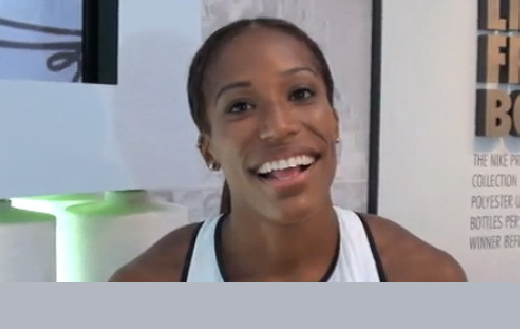 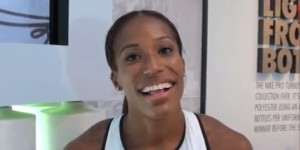 The UConn physiology and neurobiology major was competitive earning Big East Conference All-Academic Team honours, was part of a Big East Conference winning 4 x 100m relay team and was an important member of the relay team that broke the ECAC Outdoor Championship record with a first place finish time of 44.43 in 2010.

George went on to represent Canada at the 2011 and 2015 IAAF World Track and Field Championships, reaching the final in 2011. She finished fifth in the 2014 Commonwealth Games and competed in the 2012 London Olympic Games, finishing sixth in the final. To qualify to represent Canada at the 2012 Canadian Olympic Trials, she finished second in the hurdles the day after winning the 100m dash.

As the outdoor track and field season will start soon, George is now focussed on qualifying for and competing at the 2016 Rio Olympic Games.

Christopher Kelsall: You were born in Markham and grew up in Scarborough, yes?

Phylicia George: I was born in a hospital in Scarborough, but that’s about where my ties to Scarborough end. I grew up in Markham and have lived there for the majority of my life.

CK: How active of a child were you? Did you play many sports?

PG: I was a very active child. I was always running around and getting my hands into something. At a young age I started dance and soccer. I started playing basketball and volleyball in elementary school. I used to play football with the guys during recess. I was first introduced to running in grade seven during Play Day in elementary school. I didn’t start really competing in track and field until grade 10.

CK: What was the motivator during grade 10 that made you want to train seriously?

PG: I had always wanted to train with a track club. A lot of people told me I should get a coach but I never actually looked into it. After going to high school and not making it to OFSAA (Provincial Championships of Ontario) in any individual events during grade nine, I started looking into training more seriously.

CK: Your 100m time is a strong 11.25. It appears that you are really focussing on the hurdles. Are you done with the 100m other than the relay? Or will you continue to explore the event further?

PG: I’m really interested in exploring what I can do in the 100m. I’ve never really trained for it, or took the event seriously. After 2012, the plan was to start running it more seriously, but I got injured and my coach and I had to make some adjustments. The hurdles are my first love and I will always do them, however, I would like to be known for both events. I’m hoping in the coming year I’ll have the opportunity to explore the 100m a bit more.

CK: You ran very well during the 2012 London Olympics finishing sixth in 12.65. Can you take me through the race and the heats leading up to it?

PG: I was very confident heading into the London Olympics. I was coming off a breakthrough year in 2011. I was having a good year, running consistently on the European circuit. I remember being a bit nervous during my heats, but I placed second and automatically qualified, which helped to dust off the cobwebs. In the semis I ran a personal best of 12.65, to qualify for the final.

In the final I had a bit of a stumble out of the blocks, which forced me to be very aggressive with the rest of the race, and I probably ran the best 10 hurdles of my life. I duplicated my time in the semis, tying my personal best of 12.65. I was pleased with the fact that I was able to produce my best times, under pressure, even though my main goal was to get on the podium.

CK: The sensors that detect movement in the blocks seem to be hyper sensitive. In the men’s 100m there was a bit of a debacle at that event. How do you feel about the sensitivity of the sensors and the one-foul rule?

PG: I think the sensitivity of the sensors is the issue mainly because there seems to be some confusion as to what exactly constitutes a false start. It is my understanding that twitches are now allowed under IAAF rules, so as long as your feet don’t actually leave the blocks you should be fine. However, there have been many times were athletes slightly twitch and that is being registered as a false start.

Secondly, I totally disagree with the one false start rule. I think it is unfair and unreasonable to provide such a small room for error. Athletes dedicate years to training and preparing for major competitions and to have to all taken away in a split second is crazy. You would be hard pressed to find the same kind of strict unwavering rule in other sports. I think there could be a better compromise rather than the one false start rule.

CK: You managed to qualify for the semis during the Beijing Worlds running just over 13 seconds. Did you find the heat affecting your performance?

PG: No, I wouldn’t say the heat affected my performance. Everyone has to race under the same conditions so that is never an excuse. My training hadn’t been as consistent as I would have liked and I had not raced as much as I typically would have. That being said I was not quite as race sharp as I would have liked.

PG: This spring (and outdoor season) I’m striving to establish a good race pattern early and I’m really working towards running consistent times. I’ve been working on improving my hurdle technique so I’m looking forward to actually executing in races. One of my main goals is making my second Olympic team in Rio. I’m focusing on getting myself into the final, running a great race and getting on the podium.

The 2016 Canadian Olympic Trials take place on July 07 to the 10th in Edmonton. Details of the meet are available here>>

Canada has a recent history of being highly competitive on the world stage in the hurdles event with Perdita Felicien, Priscilla Lopes-Schliep, Jessica Zelinka and Angela Whyte – four of Canada’s all-time fastest competing at the same time over the past decade; Whyte continues to train and race. Zelinka competes in the heptathlon, her strongest individual event is the 100mh. She competed in both the hurdles and heptathlon during the 2012 London Olympics, finishing seventh in each.

The time standard to qualify for the Olympic Games is 13.00 while being required to finish top-three at the trials.

The Canadian record is 12.46, which is owned by Felicien from her 2004 performance during the Prefontaine Classic. The world record was set in 1988 by Belarussian Yordanka Donkova in the time of 12.21. Donkova owns five of the fastest 11 performances all-time.