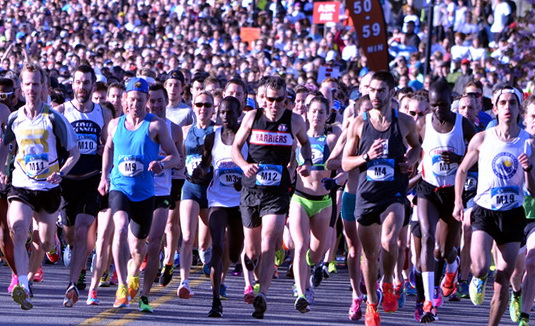 Vancouver’s Dayna Pidhoresky won the TC10K race in Victoria, BC, making it four-for-four in her 2017 road racing season.

Sunday, she won the TC10K in a near personal best time of 33:42, despite a strong headwind from the 4.5K to 8K waterfront stretch on Dallas Road.

“I went out hard with a pack of guys,” said Pidhoresky. “I could hear Emily (Setlack) nearby and she was sounding fresh. When we rounded onto Dallas Rd at 4.5K, the wind was really gusting and I lost the pack of guys. But I am not in 10K shape, so I am happy with the time on a slower day.”

Her best is 33:35 from the 2016 running of the Eastside 10K in Vancouver. Pidhoresky is looking to run the May 28th Ottawa Marathon in the low-2:30, as she seeks a spot on Team Canada for the London world championships.

Cold Lake’s Emily Setlack finished second, crossing the line in the time of 34:01, the two athletes were the 13th and 14th finishers overall. Setlack finished third in last Sunday’s Vancouver Sun Run; she was looking for the win in Victoria.

Asked how she felt about her race, Setlack said, “I am okay, but I really wanted to win, but Dayna was so strong and was a good competitor. She raced well, especially after the Montreal Half Marathon last week.”

Four-time winner, Kenyan Jane Murage, finished third. She is not having her typical season. She dropped out of the Sun Run at 3K and on March 26 finished six minutes behind Pidhoresky in the Around the Bay 30K. It was Pidhoresky’s third ATB30K win and her fastest performance to date at 1:47:27.

Hooper looks forward to racing a competitive cross-country season for the Vikes. Stellingwerff happens to be on the coaching staff.

Smith is the winningest runner in the race’s 28-year history with six open victories and a best of 33:32. She is also a 20-time Canadian champion in triathlon, duathlon, road, track and cross-country running.

“There was a strong headwind for over 3K on the water part of the run,” said Kipkoech. “I ran alone after 6.5K. I was 200m ahead of Paul Kimugul after that and it was hard work, running into the wind, but I am happy to win the race.”

Kipkoech will be hoping to win the BMO Vancouver Marathon next Sunday. His best is 2:18 and hopes to run at least as fast as 2:16 if the weather cooperates. He won the Goodlife Fitness Victoria Marathon twice in 2:20 both times.

The first Canadian was UVic Vike grad Shoayb Bascal. Bascal, who finished in 31:08, was credited with the same time as Calgary’s Matthew Travaglini. Bascal had stopped a few metres before the finish, thinking that the race was over, upon hearing the crowd urge him on, he lurched forward to avoid being passed by the Calgarian, promptly asking him, “who are you,” in an exasperated tone.

Bascal will continue to race and is hoping to run a marathon in the fall of 2017 and eventually run internationally in the event.

Odermatt said, “I am proud of my race effort and I had good race tactics today. I had a plan after Sun Run last week and it worked.”

Post-race interviews will be online shortly.

Shoestrings: There was a total of 6,827 finishers in the 28th annual TC10K. There were 20-30knot headwinds along Dallas Rd from 4.5K to 8K. Course records are 28:47 by Simon Chemoiya of Kenya and 32:56 by Polish runner Karolina Jarzinska-Nadolska.