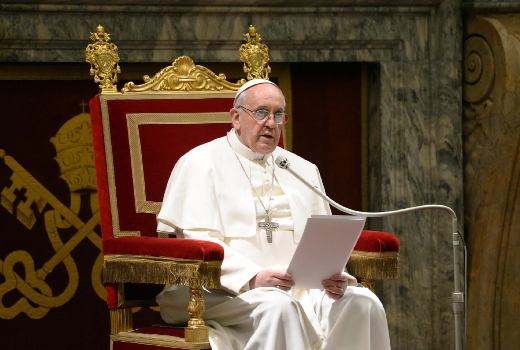 Reference herein to any specific commercial products, process, or service by trade name, trademark, manufacturer, religious deity or otherwise, does not necessarily constitute or imply its endorsement, recommendation, or favouring by Athletics Illustrated or its advertisers. The views and opinions of authors expressed herein do not necessarily state or reflect those of Athletics Illustrated.

Jorge Mario Bergoglio, also known in the ‘hood as Pope Francis, apparently influenced the decision to overturn two results at the USA Indoor Track and Field Championships that took place on Saturday, February 22nd in Albuquerque, New Mexico. This happened after two races, where runners were gently touched by faster athletes, passing by during the 3000 metre men’s and women’s races. He said, “It is in God’s divine plan to make sure that one of his loyal sons, Alberto Salazar, wins on this day, even if the win lies only within Nike.”

Salazar, while pacing randomly in the infield, took a call on his cell phone from the pontiff shortly after the running of the women’s 3000 metre race. During the call, it was agreed that Salazar must protest with great purpose, Bergoglio told the coach, “Remember son, nothing can stop your destiny, Romans 8.13.” Recognising that it is always prudent to reference your source, Salazar immediately marched with a head full of steam, to the athlete and coach’s area – and subsequently launched into a tirade and unleashed with almighty religious fervour. An anonymous volunteer who was standing nearby at the time said, “He was yelling at rival Nike coach Jerry Schumacher that he must not mess with the divine plan, he had this awful, wild look in his eyes and he was just…just…screaming.”

The athletes were gently touched as they were being passed in the final laps of their respective races. First, Galen Rupp – who was passed by 39-year-old Bernard Lagat – was lightly clipped earlier in the race. Rupp couldn’t respond and relinquished the lead for good down the final straightaway. In the women’s 3000 metre race, Jordan Hasay, who apparently was running on the outside of lane 1, therefore potentially blocking a runner coming from behind, was also gently touched by eventual winner Gabe Grunewald, who blew by her like the night train to Sunday Mass. Hasay, like Rupp could not respond, which prompted the call from the Vatican.

After three intense appeals by Salazar and his entourage, the USATF finally buckled under the mountain of intense pressure and disqualified the much faster Grunewald. At USA Indoor Track and Field Championships the athlete that went on to qualify for the World Indoor Track and Field Championships by virtue of disqualification will not factor on the bigger stage, but will be monumental in the Universe of Nike, which is the only universe on this planet that matters, or as Bergoglio said, “The culture of selfishness and individualism that often prevails in our society is not, I repeat, not what builds up and leads to a more habitable world: rather, it is the culture of solidarity that does so; the culture of solidarity means seeing others not as rivals or statistics, but brothers and sisters, except at USATF track and field meets.”