The list of potential Team Canada members going to the Rio Olympic Trials, just shifted a little during the Portland Track Festival. The implications should make for intriguing track and field meets coming up during the National Track League, including this weekend’s Harry Jerome Track Classic and the Victoria Track Classic being run on Friday, June 17 and Sunday June 19, respectively.

Perhaps Portland provided a foreshadowing of the TrackTown, Canada, Rio Olympic Trials taking place in Edmonton from July 7 to 10. These are exciting times for Canadian sports fans.

The question prevails: who is in and who is out?

Five Olympic standard performances were achieved in Portland over the two-day meet.

Vancouver’s Lucas Bruchet entered the meet as a 5,000-metre specialist who has run just outside the Olympic standard. A breakthrough has been anticipated for a while and during day two he provided it, by running a new personal best time that eclipses the Canadian Rio Olympic standard of 13:25. He finished the race in third place crossing the line at 13:24.10.

His previous best was achieved last year in Ninove, Belgium, where he ran a 13:29.79.

The 5,000-metre event has an interesting plot twist. Technically-speaking, Bruchet still sits outside, looking in, as there are already three Canadian athletes who have run faster than him and Canada can only send three athletes per event, however, only one of the three above him is likely to race the distance in Rio.

The only athlete to be a lock is Canadian record holder Mo Ahmed of Toronto who two weeks ago ran a stunning 13:01.74. Conversationally, it is currently Ahmed and Bruchet that will need to finish first or second at the Edmonton trials to be confirmed for the team. 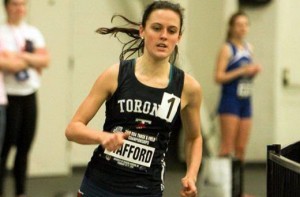 The women’s 1500-metre event in Canada is stacked, locked and loaded, well not quite locked, in fact it’s all up in the air and over the next few weeks, we should see some name changes on the list of eligible athletes going to Rio.

There is one guarantee though: some very strong talent will be left off the team to be sure.

With the apparent comeback of two of Canada’s fastest 1500-metre runners Sheila Reid and Hilary Stellingwerff, it appears that the event went from deep to deeper. Currently, the athletes who have run under the Olympic standard within the time frame provided are Reid with her 4:03.96, Nicole Sifuentes 4:03.97 – can they get any closer? Fiona Benson 4:05.24 and Stellingwerff at 4:05.61.

Kate Van Buskirk, who earned a bronze medal at the 2014 Glasgow Commonwealth Games remains on the outside. She has the talent to mix with fastest as does Benson, who had a year that dreams are made of in 2015 in both the 800-metre event and the 1500-metres; she continues to work on her form this year. In Portland she ran a 4:21.13. She has all the talent in the world, but timely performances are key and it has been since September when she ran her best.

Toronto’s Gabriela Stafford enters the scene, she ran under the standard. She slipped under with her 4:06.53, fourth place finish, behind Sifuentes, who proved fitness with that performance, being at least the second time she has run under the Olympic standard.

Anthony Romaniw did it. Romaniw is an 800-metre specialist who has toyed with international level running for several years. It has been almost three years since he has run a performance at this level, a 1:45.60 in Ninove in July of 2013.

In Portland, he did it by winning his section in the time of 1:45.94. It was the second fastest time of the day out of seven sections and 65 athletes competing (not including DNFs). At this time, the only athlete to run faster in Canada is Brandon McBride, who ran an outstanding performance recently with his 1:44.63. 1:46.00 is the Standard.

On the outside, but fast enough, given the right opportunity is Halifax’s Geoff Harris. His personal best is faster than the standard and he did compete in the 2012 London Olympics. He ran his best during the London games at 1:45.97, which in effect appeared to be that “right opportunity”.

Jessica O’Connell finished fifth in the women’s 5,000-metre run. She finished in the time of 15:23.15. She in effect proves fitness with this performance as she had already run a 15:06.44. The other Canadian to race fast enough to date is Andrea Seccafien, who, like Stafford turned a few heads with her performance.

Vancouver’s Rachel Cliff recently moved up from the 5,000-metre distance to the 10,000-metres. She came close in her race finishing fourth in the time of 32:21.98. Cliff needed to run under 32:15.00. Currently there are two Canadians that have run fast enough, they are Lanni Marchant, she has run a 31:46.94, while Natasha Wodak owns the Canadian record of 31:41.59, both set their times during the 2015 Payton Jordan Invitational.

During the intervening time Wodak became injured, however, has since come back with a vengeance as she always does and Marchant continues to run at a very high level in both the marathon and 10,000-metre events.

Cliff set a new personal best in the 5,000-metres this spring at 15:29.23. It will be interesting to see if she makes another attempt at the distance. Cliff moved to the BC Endurance Project this year, which is a BC Athletics supported group that includes Natasha Wodak and Luc Bruchet.

Not in the Portland meet, but a subject of interest is the men’s 100-metre dash. Canada is back on the world’s radar thanks in part to Andre De Grasse and a deep field of men looking to compete at his level. The sprinters to run under the standard so far are De Grasse at 9.92, Aaron Brown 9.96, Gavin Smellie 10.09, Akeem Haynes 10.15, Damian Warner 10.15 and Justyn Warner 10.16, which provides depth for Canada’s 4 x 100-metre relay team as well.

Brown’s recent dip under 10.00 and De Grasse’s performances should make for some improved running by the trailing sprinters. Warner is a decathlete. The question is, is he fast because he is well rounded having to participate in various field events or could he be faster if he specialised?

Like Warner, Theisen-Eaton is a multi-sport athlete competing at the top of the world in the heptathlon. Being the sixth fastest in Canada, it is highly unlikely that she will attempt both the separate hurdles event and the heptathlon in Rio. The most recent athlete to attempt the double was Jessica Zelinka who finished seventh in both events during the 2012 London Olympic Games.

Edmonton’s Angela Whyte just never goes away, proving that like a fine wine you can age gracefully. She has competed in nine IAAF World Track and Field Championships including three indoor worlds and two Olympic Games. She has run at the top of Canadian hurdling scene for over 16 years.

Previously Whyte was known as the other one, having run in the shadow of Perdita Felicien, who currently owns the national record as well as Pricilla Lopes-Schliep, at 36-year-of-age she continues to get it done, will she escape the other one nomenclature?

The qualification period for most events started in May of 2015 and runs to July 10th, the final day of the trials in Edmonton.