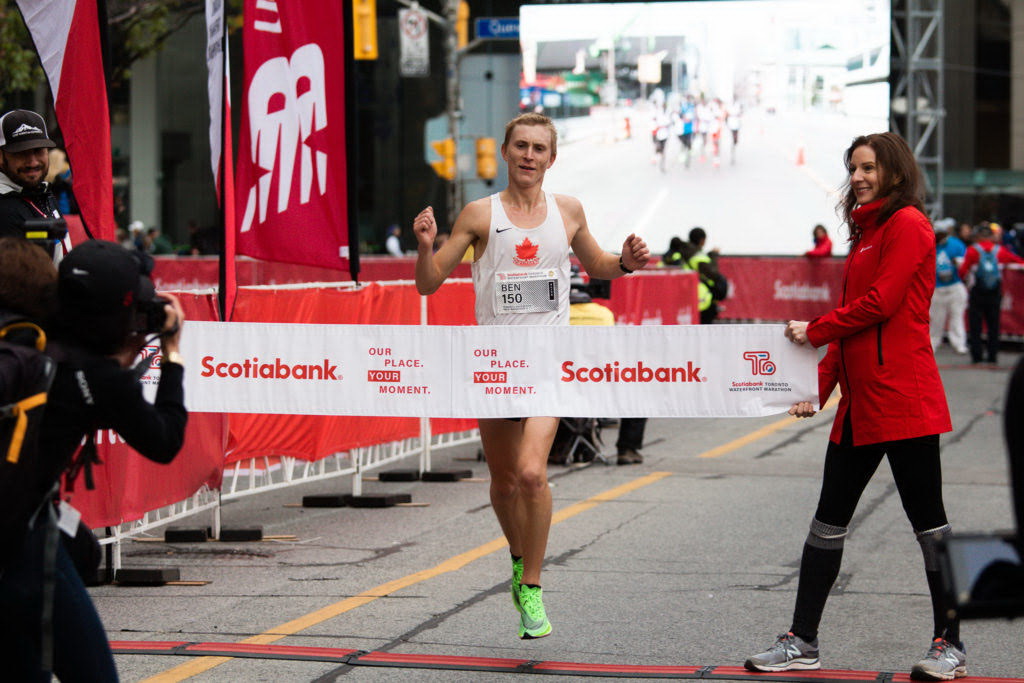 In preparation, he competed in the Vancouver Half Marathon on Sunday, clocking a 65:49 finish time for the win, in the heat. The high on the day was approximately 30 degrees. He also completed a 40-kilometre day, including a 17K warm-up.

Finishing in second place was Brendan Wong in 67:23, and the third-place finisher was Mohamed Aagab clocking a 67:38 finish. The top three women were Samantha Jory in 78:19. Jory was followed in by masters (40-plus) runner Jen Millar for second place in the time of 78:53. while Danielle Thiel clocked a 79:15 result for third.

For Preisner, it was a final workout before his upcoming marathon.

“I really used yesterday as a workout — my last 40K session of the build to Worlds — the goal was a conservative tempo and hoped it would be enough for the win,” shared the 26-year-old Tokyo Olympian. “I felt strong out there the whole way — the heat obviously played a factor in the time, but it was good prep for Eugene.”

Preisner’s day was very similar to Trevor Hofbauer‘s workout before the 2022 Boston Marathon where he ran his second-fastest time with a 2:10:52 performance. The Calgary native, who move to BC a year ago, won the Comox Valley Half Marathon in the middle of a 40K day. Hofbauer clocked a 68:21 win, looking fresh at the finish.

Global championships like the Olympics and World Championships are run in the summer and are often very warm. Eugene, with a 6:15 AM local time start will likely be temperate. The average nighttime low is 10.8C or 51.4F. The average high is 27.9C or 82.3F, however finishing a marathon at 8:25 to 8:30 AM, the temperature should stay in the runner’s favour.

The Vancouver Half Marathon has a flat start, and a big drop, before rolling throughout to the finish.

The World Championship’s marathon course is a mostly flat 14K loop that will run through Eugene and Springfield, OR. Runners will start and finish in front of the University of Oregon’s Autzen Stadium.

“I enjoyed this year’s new course! It definitely still has rolling hills pretty well the entire way. But it’s quite scenic and the finish location was well put together,” added Preisner commenting on the Vancouver Half Marathon.

Preisner has run the marathon as fast as 2:10:17. He ran the time during the one-off Dec. 2020, The Marathon Project, that was run in Chandler, AZ. Preisner is the fourth-fastest Canadian of all time and the third-fastest active Canadian marathon runner. Cameron Levins of Black Creek, BC holds the record at 2:09:25. Kelowna’s Hofbauer is the second-fastest at 2:09:51 from the 2018 and 2019 Toronto Marathons, respectively. In 1975, Jerome Drayton set the national record in Fukuoka, Japan at 2:10:09. That performance stood until Levins improved it in Toronto.

Levins also ran 2:10:14, the fourth-fastest Canadian time, in Austria last May 21. It was a last-ditch effort to qualify for the Tokyo Olympics Games. Levins, Preisner, and Hofbauer all competed in those games, where the marathons and racewalk events took place in Sapporo, 800K north.

Preisner may be looking for a little redemption. Sapporo (like Tokyo) was hot that day with a high of 34C/93.2F resulting in a 46th-place finish in the time of 2:19:27.

The Canadian marathon team for World’s

Rory Linkletter ran his best marathon in Chandler with a 2:12:54 performance. A year later, he ran the Sacramento Marathon, a downhill course that doesn’t count towards Olympic qualification. He finished in the time of 2:12:52. However, a month later, in Houston, he dropped the hammer clocking a 61:08 half-marathon to break the national record. He will be representing Canada in Eugene along with Levins.

The women’s team includes Kinsey Middleton, who won the Ottawa Marathon in the time of 2:30:09 on May 29. It was the best performance over any distance for the Boise, Idaho resident, who has dual citizenship. Not quite the World’s standard of 2:29:30, but it was hot.

Leslie Sexton and Élissa Legault round out the team heading to Eugene. Legault ran a 2:33:27 in Ottawa. In Nov. 2021, Sexton clocked a 2:28:35 marathon for the fastest of the three.