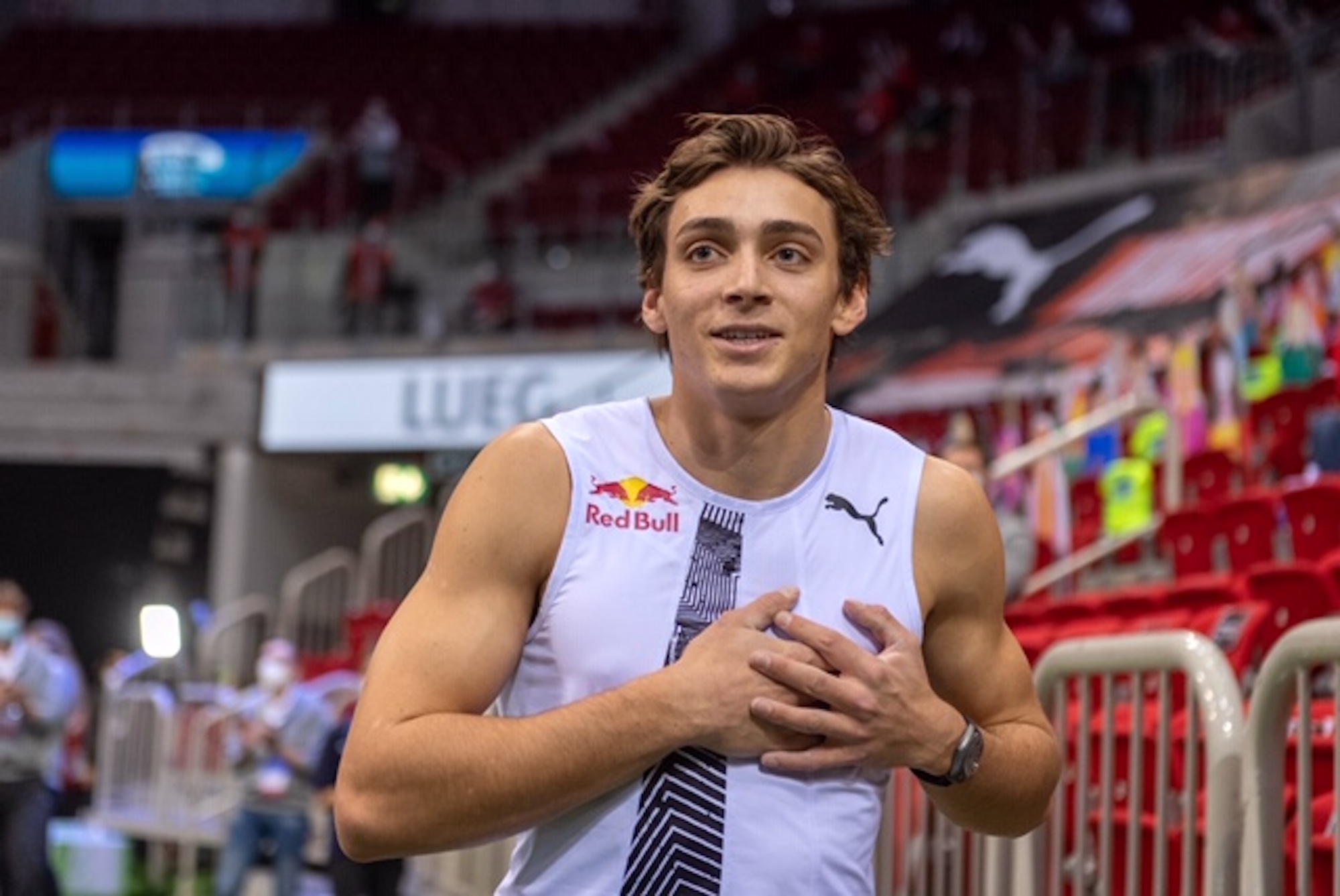 The first edition of the ISTAF INDOOR in Düsseldorf produced world-class athletics in the ISS Dome. Pole vault star Armand “Mondo“ Duplantis crowned the premiere with a dominant performance, establishing a world lead and a strong meeting record of 6.01 m. Only when he tried to improve his own world record by a centimetre to 6.19 his high flying show finally came to an end. Behind the Swede Torben Blech of Germany achieved a huge personal best of 5.86. Britain’s Dina Asher-Smith won the 60 m dash in 7.12 seconds while Germany’s Malaika Mihambo took a very close long jump contest with 6.74m.

An unexpected duel between Germany’s Torben Blech and Sweden’s Armand Duplantis developed with the former improving to 5.86 m. However, Duplantis was superior and once more confirmed his position as the world’s number one. Securing victory with 6.01 he immediately went for 6.19 m. However, the world record height was too much for today. Duplantis ran through at his first attempt and then retired. “It was a great competition. I have a special relationship to Düsseldorf, because it was here where I cleared six meters for the first time. I am not sure why, but in Germany, it is always going great for me,“ said Armand “Mondo“ Duplantis. Second-placed Torben Blech commented: “It was great. The music, the atmosphere, the performance – I was in a flow and relieved that I finally was able to show what I am capable of. I always like being in Düsseldorf. And now I am really looking forward to the ISTAF INDOOR in Berlin on Friday.“

Dina Asher-Smith fastest woman at the ISTAF INDOOR in Düsseldorf

Britain’s Dina Asher-Smith took the 60 m premiere in Düsseldorf in 7.12 seconds. “It was good. I am happy to be back running again. It has been quite a long time since my last race in 2019. I am looking forward to the next ones,“ said Dina Asher-Smith. Germany’s fourth-placed Rebekka Haase, who clocked 7.24, was thrilled with the set-up in Düsseldorf’s ISS DOME: “The arena is impressive. I really liked running here. I am happy with my result and look forward to Berlin,“ she said.

German sprinters were left trailing in the 60 m. Arthur Cissé of the Ivory Coast flew away in 6.54 seconds. “It was a fantastic start into the season for me. My race was not perfect. So I hope to run faster in five days in Berlin. It was great what organizers put together here and I would really like to experience this with spectators next year,“ Cissé said. Germany’s Kevin Kranz took second in 6.61.

It was a very close affair but Malaika Mihambo took the long jump of the ISTAF INDOOR with 6.74 m in the city of sport, Düsseldorf. Khaddi Sagnia of Sweden achieved 6.74 as well but had to settle for second place since Mihambo’s second best attempt was superior.  „The ISTAF is always great, also in Düsseldorf. The music and the atmosphere was fantastic. I now have to stabilize my performance level. I am looking forward to Friday and want to jump a bit further in Berlin,“ said Malaika Mihambo.

It can not really get closer: Damian Czykier just edged the 60 m hurdles in a photo finish. The Pole was given an exact time of 7.64631 seconds while Aaron Mallett of the US ran 7.64639. “With the light show and the fireworks organizers of the ISTAF managed to create a great atmosphere even without spectators,“ said Damian Czykier.

Nadine Visser of the Netherlands was the fastest in the 60 m hurdles in Düsseldorf. She took the event at the ISTAF premiere in 8.00 seconds from Alina Talay. The Belorussian clocked 8.01 while the Netherlands’ Zoe Sedney was third in 8.04. “To be honest I am not quite satisfied with my result. I will relax a couple of days and then hope to improve at the ISTAF INDOOR in Berlin on Friday,“ said Nadine Visser.

“Finally we had live sport back in the sports city of Düsseldorf. We saw a first edition of the ISTAF INDOOR in the ISS DOME with six top athletics events. There were close contests and a thrilling duel in the pole vault with Torben Blech and Armand “Mondo“ Duplantis. We are very happy that we were able to make possible this great sports event in cooperation with the ISTAF-Team,“ said Lars Wismer, the Director of Sports at D.LIVE.

“To stage the ISTAF INDOOR during these difficult times was a great experience for all those involved. We have shown what a great sport athletics is. However, our biggest success was that our hygiene concept worked without faults. Everyone behaved in an exemplary manner. All our 800 corona tests turned out to be negative. I thank everyone who contributed to making this ISTAF INDOOR happen,“ said meeting director Martin Seeber.