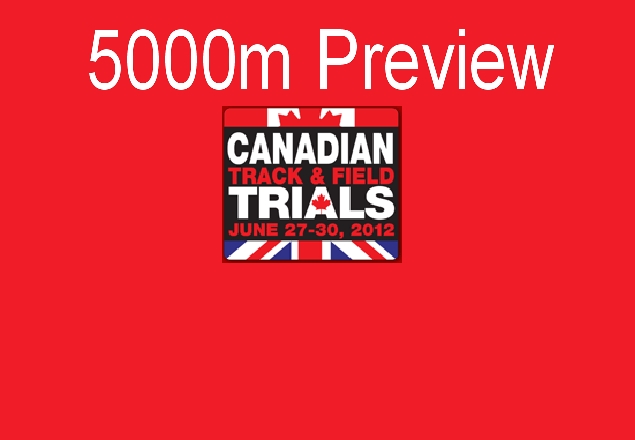 The Canadian Men’s Olympic trials will come down, not so much of who will make the Olympic team, because it will be a stretch for anyone outside of Cameron Levins to do so. However, the men’s 5000m event may prove exciting anyway, as nine of the athletes have personal best performances that are less than 50 seconds apart.

The Women’s race should prove to be exciting as the top four competitors come to the race with sub-16 minute personal bests that are within 35 seconds of each other from first through fourth. Megan Metcalfe-Wright is the favourite however, unlike Levins in the men’s field, she should be challenged and has not run the A+ Standard this year.

Cameron Levins of Black Creek, British Columbia will be racing the 5000m event. His personal best of 13:18.47 is head and shoulders above his fellow competitors in this particular race at the trials. Look for Levins to simply fulfill his Olympic team selection criteria obligation of running to the top-three positions. He will likely win it in the slowest possible time necessary to finish top-three.

Edmonton’s Megan Metcalfe-Wright looks to be the front runner, as she has run as fast as 15:11.23 and brings with her an extensive international resume, including having competed in the 2008 Beijing Olympic Games as well as many World Cross Country Championships, over the years. She is seeded first with a recent best performance of 15:15.33 in 2011 and 15:21.73 this season.

Battling it out for second and perhaps first will be Toronto’s Sheila Reid. She has run as fast as 15:23.64 this season, her personal best. Reid is also competing in the 1500m competition. Megan Brown is seeded third with her 15:33.42, which she ran this year. Tarah Korir is seeded fourth with her 15:49.91. The remainder of the field is rounded out by eight athletes who have run over the 16:00 barrier. The top three Metcalfe-Wright, Reid and Brown will make this event very competitive.