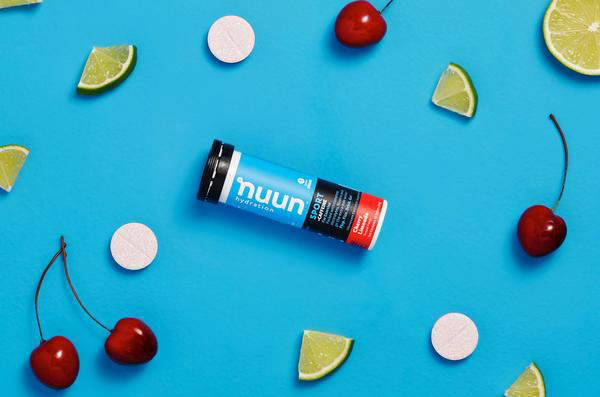 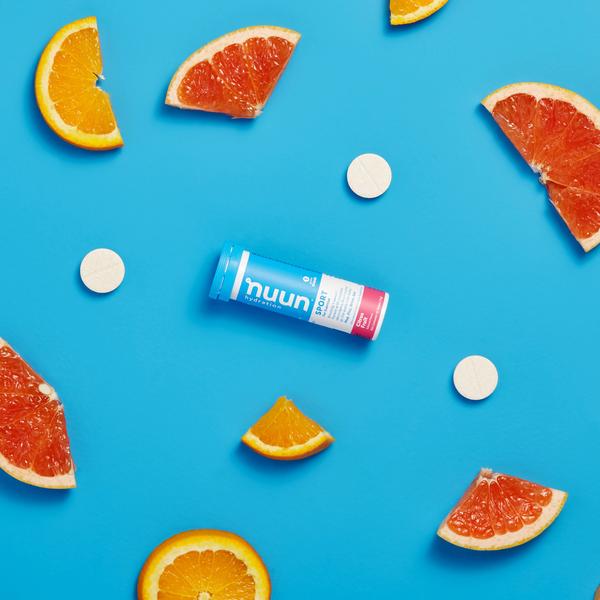 “Plop plop, fizz fizz, oh what a relief it is!”
-Thomas W Dawes

Those words are part of the once-popular lyric-set for the Alka-Seltzer jingle, a product known for its effervescent antacid and pain relief benefits. The brand was first manufactured during the 1930s and then popularized on TV during the 1960s and 1970s. Fast forward to the 2000s and although the stanza is trademarked and apparently word-marked, one could sing the words about Nuun (pr: noon) beverage tablets.

Plop one in a 16-ounce glass or two in a half-litre water bottle, add water and wait. They fizz like Alka-Seltzer but taste so much better.

Not only do the pre and post-workout mineral-containing tabs taste better then Alka-Seltzer, they also seem to function better than their competitors Gatorade and Powerade.

Gatorade can cause gastrointestinal issues (gas) and cramps, especially if mixed poorly from the powdered form. They both contain a high volume of sugar at 34grams in a 590ml bottle.  Complaints about Powerade suggest that the high-fructose corn syrup tastes sweeter than Gatorade’s sucrose.

For anyone wanting to flavour their hydration protocol, but not too much, Nuun Sport tabs are perfect. Light in flavour, they are also very low in sugar, yet have enough of the four primary minerals that become lost with sweat during vigorous physical exercise: magnesium, potassium, calcium and primarily sodium to help prevent potential late race or late workout muscle cramps. Or those unsuspecting moments while recovering. Ever jump off the couch or stand quickly at the table while experiencing a sudden debilitating muscle cramp?

Don’t worry about getting too much in the way of minerals with Nuun products. You would be far too bloated with water before you have consumed too many minerals to hit toxicity levels with Nuun. For example, the Recommended Dietary Allowance (RDA) of sodium is 1200mg to 1500mg, depending on the age and size of the person. Magnesium is recommended at 320mg to 420mg per day.

It would help to know your sweat rate and mineral concentration of sweat or a rough idea of them. The average athlete loses sodium at approximately 1000mg/litre of sweat, but results can vary greatly. Think of those hard long runs or century cycles where post-effort, you find so much salt that you appear to have been sanding drywall with your face.

In comparison, one eight-ounce cup of coffee will contain approximately 94mg of caffeine. In comparison, Coca Cola (Coke – 335ml Canadian can, 354.88ml or 12 fl. oz American can) contains 32mg of caffeine. So for those who enjoy the benefits of caffeine will get enough to supplement their coffee, tea or chocolate intake, but not replace it – less chance of the jitters.

One GU Gel packet labelled: Expresso Love, contains 40mg of caffeine. Several other flavours contain just 20mg. But of course, GU gels are an energy product to provide sugar and sometimes amino acids, antioxidants and herbs – the end game of the GU Gel sugar is to top up the glycogen stores (blood sugar) – they are a product with a different purpose than Nuun’s. GU requires a beverage to wash it down, why not a Nuun!

Nuun tablets provide just enough minerals to top up one’s stores that should be obtained from a well-balanced and healthy diet.

I suffer from chronic muscle cramping in the right shoulder and right upper back area from hitting heavy bag 30-minutes strenuously, three-times per week (not including warm-up, warm-down, weight lifting and bodyweight resistance exercises, 60-minutes). The cramping is located near deltoid-infraspinatus and Teres minor and Teres major areas. After a two-hour steady-state run or other extended bouts of exercise, the cramping can become acute.

When suffering acute muscle spasms or cramping, I took two Nuun tablets in 500ml water bottle, as well as ate protein-rich foods (containing an undetermined amount of sodium), the cramping stopped completely within the hour.

The above has happened several times. There were no GI issues experienced.

Additionally, while experimenting with the ketogenic diet during 2018, muscle cramping was a daily occurrence. Vegetable broth is a popular solution and it works, however, sometimes a refreshing and very mildly flavoured beverage is preferred. Nuun was a successful antidote to painful toe, hand, back and hamstring cramps.

Where Gatorade pre-mixed products cause GI issues, Nuun has not.

After eight hour workdays, two to three times per week, subject cycles 30-minutes, to 60-minute yoga class or 45-minute spin class. She consumes approximately 300ml of water containing one tablet before and during cycling and spinning and before yoga and the same after yoga. Typical chronic foot and thigh cramping were eliminated (two tubes over one month period).

Nuun Hydration products are priced at fair market value. While a 32-ounce (950ml) bottle of Gatorade sells for $1-$2, Nuun Hydration 10-tablet tubes sell for $7. Each tab is suggested to be added to a 16-ounce or 500ml volume of water.

While one gets more water and sugar per dollar with Gatorade or Powerade than Nuun, one also adds approximately 30-50-times the volume of plastic waste to the environment; however, Powerade and Gatorade bottles can be rinsed and re-used for Nuun Hydration tablets and tap water.

Nuun and Company started out in 2004 by founder Tim Moxey of Seattle. He was looking for a workout solution that was more than just water and didn’t contain all the sugars that popular sports drinks offer.

Since then, Nuun has apparently become the most reached for performance hydration product in the market. It helps to have CEO Kevin Rutherford involved who is experienced in marketing products such as Kashi and Bear Naked. He also happens to be an endurance athlete. Apparently, he believes in the product he is selling, which earned the product a coveted spot on the shelves of Whole Foods.