The quality of competition will be high this weekend during the Christie-Phoenix Insurance Victoria Run Series, as it reconvenes Saturday, May 30th at the University of Victoria at 6:30 PM.

The University of Victoria Vikes will be out in full force with athletes competing in the 800m and 3,000m distances for both men and women as well as all-comers categories. Additionally, there will be a youth 2,000m race that will feature some of the province’s top youth runners including a group from the Prairie Inn Harrier’s Youth Team, which is coached and managed by two-time Olympian Bruce Deacon.

The women’s 800-metre event will feature 2012 London Olympian Hilary Stellingwerff, who specialises in the 1500m distance. Her best in the 800m is an impressive 2:01.22; only a handful of Canadians can run faster at this time. There is a possibility that 2014 Glasgow Commonwealth Games medallist, Kate Van Buskirk of Toronto could toe-the-line. She also specialises in the 1500m distance and has an impressive 800m best of 2:02.62. Vikes Female athlete of the Year Rachel Francois is one of Canada’s up and coming 800m runners and has run nearly as fast. All three are seeking 2015 Toronto Pan Am Games and Beijing World Championships qualification. Also in the field are former University of Idaho’s Erica Digby, of Vancouver and UBC Thunderbird, Rhiannon Evans. Victoria’s Casey Atkin, who is known more as a sprinter will also be in the field, 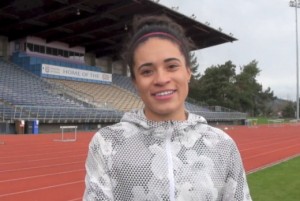 making the women’s 800m a very fast race. Francois said, “It will be a great opportunity to run a fast time, I’m feeling strong and ready to toe the line with the best.”

The men’s 800m race will be led by the Vikes Tyler Smith and Isaac Penner as well as Toronto’s Peter Corrigan. At the age 17, Smith ran a very impressive 1:47.96. The 19-year-old has recovered from health issues and is ready to run fast. Penner is coming off of a brand new personal best performance of 1:51.84 from a May 17th Portland, Oregon meet. Corrigan has displayed excellent range as he has run the 800m as fast as 1:49.11 and the 5,000m and 10,000m as quick as 13:46.01 and 29:22.20, respectively. This should be a competitive race. “I am looking forward to racing well again. I hope to be healthy and ready to take on the Victoria Track Classic and Harry Jerome meets the following week. I would like to qualify for the Pan Ams and Worlds this summer,” shared Smith.

The women’s 3,000m race will feature Vikes Shauna McInnis, Chloe Hegland and Kendra Pomfret as well as Trinity Western University’s Fiona Benson. McInnis is coming back after injury this spring, while Pomfret has been performing very well on the track having set a new personal best on May 14th in Los Angeles at the Hoka One One meet with her performance of 4:15.49 in the 1500m. On May 17th, fellow Vike, Chloe Hegland ran 5,000m personal best in the time of 17:09, which represents more than a 12-second improvement. Benson has competed for Canada at the World cross country championships and seems to thrive on the longer distances.

The men’s 3,000m distance features Corrigan running his second race of the night, while Vikes Ben Weir and several teammates will toe the line. Weir has been running well recently including a 32:09, top-10 performance at the Times Colonist 10K. Declan White of Trinity Western University may be racing. If so, he is likely the pre-race favourite as he has set at least six new personal bests during the 2015 season, including an 8:07.11 3,000m and a 29:58 performance during the Vancouver Sun Run. Liam Kennell just returned from his first year with Souther Utah University, under coach Eric Houle, who coached Cam Levins before Alberto Salazar.

Eighty-five-year-old Maurice Tarrant will be racing the 3,000m in the all-comers race and will be seeking his third Canadian age-group record in as many weeks. Tarrant set a three-minute national record May 24th in a half marathon, while he improved on the Canadian record in the 1500m distance two weeks ago. Tarrant has taken well over 60 national age-group records as well as a handful of world records.

The Christie-Phoenix Insurance Victoria Run Series includes four track meets and three cross-country races. The events are open to all abilities and all ages. The series is in its sixth year and has included over 40 meets and more than 100 individual races.

For more on the series, visit the site at www.victoriarunseries.com.