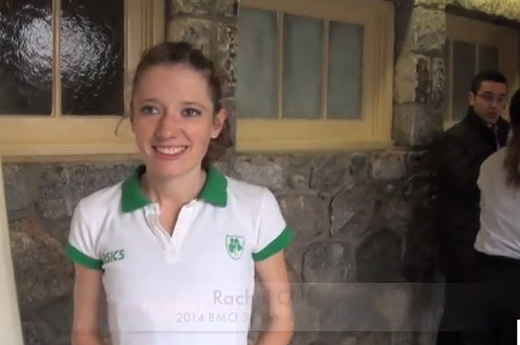 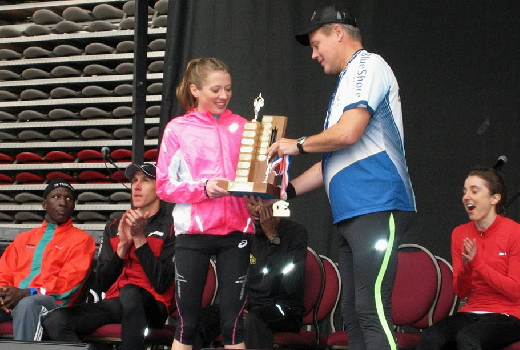 With Sunday, April 27th being a big day in Canadian road racing with three major events taking place on the same day, in three different cities, one may suggest that Rachel Cliff’s win in the Vancouver Sun Run was due to the competition that was spread across the country racing. This is not the case. She won by running well. Her finish time was fast enough to win eight of the 29 previous Sun Run races.

Cliff ran to a new personal best time of 33:14, which is one of her best performances over any distance. Yet racing over 10-kilometres on the road is new to her as she has specialised in racing the 1500, 3,000 and 5,000 metre distances on the track and up to eight kilometres in cross country.

It has been said by many accomplished middle and long-distance runners that one of the major keys to racing well on the roads or in track is to start racing well in cross country.

Over the past two years, since moving home to Vancouver (from Guelph, where she had attended university and competed for the Gryphons), she has demonstrated growing fitness in cross country. She has twice run in the provincial and national cross country championships, as well as the North American Central American and Caribbean Championships (NACAC) and the IAAF World Cross Country Championships.

Christopher Kelsall: Congratulations on the Vancouver Sun Run win. When you saw the start list in the morning, were you thinking win?

Rachel Cliff: Thank you! When I saw the start list in the morning I knew that I was, on paper, the favourite, but I also knew it would be a tough win. There were lots of strong, talented women in the field and girls who’ve been showing real improvement this past year. Additionally, I’m pretty inexperienced with the longer distances. You never know how a race will play out or who will do what on the day, I was pretty nervous going in and very happy it all came together!

CK: With the big downhill start, did you get in a ridiculous first kilometre and first mile time?

RC: I actually don’t know what I was. I looked out for a clock because I was curious – I knew that first mile would be fast with the downhill – but couldn’t find one so I actually don’t know any of my splits! From my experience it’s best to stay relaxed and just use the hills to your advantage, even if this means going out a bit “faster” than recommended.  I’m sure that technically those first splits were too quick, but I never felt out of control in the race or like it came back to haunt me. I just focused on being smooth and relaxed and felt strong for the whole race.

CK: Your finish time of 33:14 has to be one of your best performances to date. Recently you cracked into the 15s on the track for 5,000 metres – you are on a roll. What do you attribute this new level of performances to?

RC: Gains in distance running definitely don’t happen overnight! The performances I’m having now are a result of the past years of work. I made some pretty big changes in the fall of 2012 (changing coaches, moving home, starting grad school etc.) and overall they’ve been very positive. From a training standpoint I’ve developed a great working relationship with my coach and we’ve been able to build a structured program specific to me. Last year, overall I ran great, but there was a bit of trial and error as we’d just started working together. After last summer we were able to really identify the areas I needed to target and design some specific workouts.

We’ve cautiously increased my mileage, strength, weights and speed work and are gradually building in workouts and intensity. It’s been a slower buildup than I’m used to so CJ (coach Chris Johnson) has had to remind me to be patient. We’ve been seeing consistent improvements through my training for quite a while now and it’s finally starting to show in my race results. I’m excited for the next races coming up!

CK: This must bode well for your upcoming track season. Are you focusing primarily on the 5,000m?

RC: I really want to have another personal best in the 5km this summer – that’s a definite goal – and I’d also like to get my 1500m time down.  Most of the best 5k’s in North America are early in the season so that’s the focus for the next month. Because of this I’ve been doing mostly 5km/base workouts. I’m slowly starting to add in 1500m/800m work and I’ll start doing more 1500’s as the summer goes on. We’ll see what I pick to focus on at nationals, but I’ll likely switch my focus to the 1500 at some point this summer.