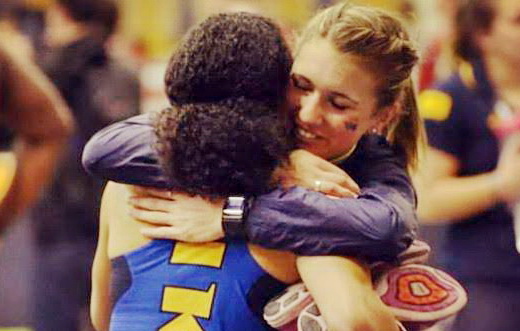 During early spring the skies to the west of Victoria often cast ominous clouds over the ocean. They appear threatening; perhaps they are a foreshadowing. The clouds, like a sprinter, can move quickly and without notice breeze onshore and blast random weather at the temperate city.

During year two of the Victoria Track Series, Rachel Francois was attempting to hit a strong 800-metre time. It was her first outdoor season at the University of Victoria. Teammate Kendra Pomfret was to pace her through the first 400m.

It was early May and the clouds were threatening, they were hanging about just offshore, brooding. We were at the Oak Bay High School track, which is situated one kilometre south of UVic. It is the only track in the universe that features a Garry Oak tree. The 300-year-old brute makes home and overhangs at the 400m start line. It has seen beer mile world records, Olympic middle and long-distance runners train there like Angela Chalmers, Gary Barber, Debbie Bowker, Jonathan Brown, Robyn Meagher and Ulla Hansen to name a few. The Garry Oak has seen it all.

Coaches and race organisers need to bring a broom to the Oak Bay track to sweep the fallen tree shrapnel that carpets the first 20 metres. Acorns, twigs and leaves; they are a quaint feature after a spring storm.

The gazelles, Pomfret and Francois, go through the first 400m fast. Pomfret peels off and awaits the outcome, while Coach Brent Fougner and his team cheer Francois on through the loneliness of that 600m marker. She shreds rubber bits with those sharp spikes, but it wouldn’t be her day. Francois the competitor was frustrated with her performance. After a short personal time out, face-down in the grass, under that ancient tree, she walked over and apologised; the storm had receded.

As it turns out, Francois is now one of the University of Victoria’s all-time great middle-distance runners. Like Greek goddess Anemoi; she is the personification of the four winds. She specialises in the 800m event but is a converted sprinter.

In May of 2014, she became one with the Canadian elite when she achieved her personal best time of 2:02.18; however, she is not done yet.

“I am definitely not done. I am finishing up my degree at the end of summer and have a great training set up here at the (Athletics Canada) West Hub,” shared Francois. “I know my best races are to come, so I’m looking forward to pursuing that.”

Originally from St. Albert, a bedroom community on the north-west edge of Edmonton, she graduated from Paul Kane High School. It’s a blue-collar town and aptly the Paul Kane teams carry the nickname: Blues.

Francois converted exclusively to running after Grade 10 having played primarily soccer until then. During high school, she competed in the sprints, mostly in the 400m distance.

Pomfret, one of Francois’ best friends shared, “I spent the majority of my varsity career in Rachel’s shadow. That may sound defeating, but the beauty of a shadow is that it can lay both behind and in front of you, depending on which way the sun faces that day and your position to it. In training, and in life, I have been fortunate enough to share an alternating shadow with Rachel. She is the teammate who makes the seemingly impossible workouts possible and the friend who is always down for a good time. A grinder of all sorts, I spent a fair share of my time at UVic chasing Rachel’s shadow, especially in (interval) repeats less than 400m. Thankfully, the day we realised I was not destined to be a 600m speed demon like her, was the day I learned that the shadow could alternate, and we could pull from one another’s strengths and weaknesses to work collectively toward our shared goals.”

Francois red-shirted during her fourth year, it was 2015, an opportunity to train and race to qualify for the 2016 Rio Olympic Games.

In Victoria, Francois not only has fast friends, she has her fast mentors. Currently two-time Olympian Hilary Stellingwerff is working with the Vikes in a coaching capacity. Former Canadian 800m record holder, Diane Cummins, took Francois under her wing in 2015. They travelled Europe together, racing and chasing the Olympic standard of 2:01.50; less than half a second improvement on her personal best.

She would get close with a 2:02.25 at home at UVic’s Centennial Stadium, but not close enough. Global championship competition would have to wait.

“Rachel and I have a strong connection,” said Cummins. “She was at the world championships in 2001 in Edmonton and watched me compete in the final. I saw a photograph of Rachel from 2001, she was so young!”

Perhaps Francois’ presence was a foreshadowing, as Cummins would set the national record and become just the second Canadian to break the two-minute barrier with her performance in Rieti, Italy of 1:58.39, three weeks later.

“It was such a privilege to later share the starting line with her in the 800m – on many occasions – and then to become really good friends despite the obvious age difference, whilst travelling and training in Europe. I have some very fond memories of eating ice cream and Belgium waffles and enjoying a good breakfast and great cup of coffee with her. She is kind and sweet and fun and beautiful and fast. We will always have a special bond.”

Francois feels that sharing a part of her track career with Cummins was an incredible experience. “She taught me so much about training and racing, and I would even learn from her through being in the races alongside her. Her energy is infectious and she is one of the most inspiring people I have ever met. The most important thing she has taught me is to appreciate the whole experience I get out of track, not taking anything for granted.”

Francois doesn’t run cross-country. Well, she does, she races cross to help her team, but if it didn’t help her team, she would probably opt out. It’s a sacrifice for a close-knit team where indelible friendships are developed.

“Last summer, Mariah (Kelly) gave Rachel the nickname “Sunny” and I can’t think of a better one-word description to capture her bubbly persona. Walking from A to B at any track meet or function with Rachel (regardless of what country we are in) takes 10 times longer than expected; you won’t pass a single person she doesn’t know, or that she won’t stop and take the time to hug. Conversely, Rachel is the most intimidating competitor on the start line, despite being the most popular and approachable person off. She brings a fearless nature to every start line and is an absolute gamer for her teammates, even on cross-country courses ten times the length of her preferred distance. Her varsity career at UVic has been nothing short of amazing, both with her numerous athletic accolades as well as the impact she will forever hold on Vikes’ Nation and the surrounding UVic community,” shared Pomfret.

Asked why she chose UVic, Sunny said, “I remember my first visit so well. Cole Peterson, Adam Gaudes, and I went on the trip at the same time as well as a few others I know well. I already knew some people on the team, especially the Albertans, and was hooked after spending some time with the team and getting a feel for the dynamics.

Another part of the trip that sold me was one run around Elk Lake. I couldn’t believe how beautiful the trails were. Brent and I really clicked after talking to him, and I made my decision based off of a gut instinct. It just felt right.”

Francois described the relationships that she developed with the team as defining her experience as a student-athlete at UVic.

“These teammates become your family; you work so hard together and have to be so trusting of each other. These relationships have completely shaped who I am – they’re the people you spend the most time with, you see each other at your best and worst moments.”

Francois feels that her teammates taught her about the importance of being accountable; they’ve given her that tough love when she needed to hear the harsh truth, and they celebrated the highs and, according to Francois are a source of comfort and support during the lows.

“Every single person adds a little bit of spice to the team with their unique personalities. I have learned so much from my teammates about training, racing, and the mental game that sport requires.”

Coach Fougner shared, “I knew early on that I could not put Rachel in a box and get “X” results. She would surprise you with an amazing display of her physical ability when you least expect it and produce the opposite when you think she should be on top of her game. I realised I was working with an extremely talented athlete physically, but whose destiny was controlled by her emotions which are the driving force behind motivation.”

That’s the same emotion that I observed during that first meet at the Oak Bay track.

“Over the past six years, I have learned how to guide her through this complexity.  I believe an athlete can learn to control the cognitive and take their performances to another level, even beyond what seems physically possible. It’s been such a rewarding experience for me to have had this opportunity to work with Rachel and to see her grow into an amazing athlete and person,” added Fougner.

Sometimes those clouds are held back by a mass of mild air that leaves blue sky and stratocumulus, that scuttle along at their own pace. They move in the shadows of the storm and along the ocean straights; middle-distance runners tracking the curves of the cliff-side beaches. They are a virtual metaphor for the days and ways of distance runners and speed demons.

The storm of race day is a far cry from a regular training run; it’s all tall dewy grass and damp air.

No apologies were ever required that day under the old oak tree. She is a storm cloud in a race and a sunny day off the track; the perfect combination of teammate and friend.