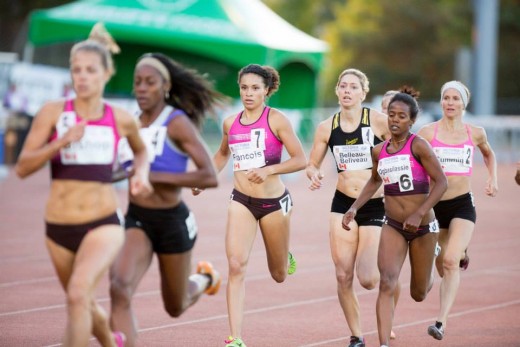 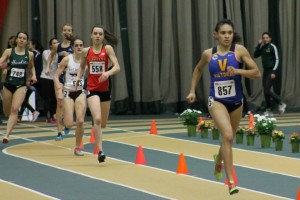 The Canadian Interuniversity Sport (CIS) Indoor Track and Field Championships took place March 6th through the 8th at the Butterdome in Edmonton, Alberta. There were several excellent performances over the weekend, however; for the St. Albert native (a suburb of Edmonton) Rachel Francois, who competes for the University of Victoria Vikes; she may have had the best weekend, as she earned two gold and one silver medal while competing in three events.

Francois raced the 600-metre event, where she was favoured for the win. She also raced in the 4 x 400-metre relay, winning silver and 4 x 800-metre relay, where she helped the Vikes to gold. It was her 600-metre gold medal performance that stands out, as she ran to a personal best time of 1:28:40 while taking the race out fast from the gun. Her previous best at the distance was 1:29.69. She is now a three-time champion of the event, “I wanted to take it out fast and controlled. In my head, I was looking to make the race pretty fast, so I took it out aggressively right from the gun and it worked out pretty well! It was my first time breaking 1.29 so I was very happy,” said the third-year History student.

Francois is no stranger to the CIS podium, for example in 2013; she won gold in the 4 x 800m, bronze in the 4 x 400m relays and gold in the 600m event. During her first two years, she was voted Canada West First Team All-Star in 2012 and Canada West First Team All-star in cross-country in 2013. She said, “I knew my fitness was waiting to catch up with the work I’ve put in this season, and I was feeling good going into this past weekend. I felt like a personal best was coming so I just had to execute the race right. I really just wanted to have some fun this weekend…I love racing and I wanted to carry that energy all through the weekend and just have some fun with it.”

During the 2013 outdoor track season, Francois had the opportunity to travel and race, taking in National Track League events in Canada as well as debuting in some European dates. With staying healthy and continuing to get in consistent training, perhaps she will take the next step during the 2014 outdoor track season. “I just have to focus on staying healthy, and if that can happen and I keep my training consistent I think things will fall into place this outdoor season. I’m really looking forward to keeping this momentum going through the spring and summer and dropping my times,” shared Francois.

Dropping her times may mean a chance to represent Canada at the 2014 Glasgow Commonwealth Games, which will hinge on her performing at her best during the short window of opportunity that exists, as the qualifying period ends June 1st. Also the important combination of how her Canadian competitors perform this outdoor season and of course her own performances, factor greatly.  Canada can send three qualified athletes per event. Francois’ best opportunity is in the 800-metre race. Canada is currently rich in women who can make the qualifying times for Glasgow, which are A-standard 2:00:00 and B-standard 2:01:50. Additionally, she must compete and prove competitive readiness at the Canadian Track & Field Championships that will take place in Moncton, New Brunswick June 27 through the 30th. Her personal best at this distance is 2:03.47.

One of her Canadian competitors who could make the team are the ageless Diane Cummins, who at the age of 40 may surprise people. At the 2010 Commonwealth Games she won a silver medal at the age of 36. Cummins owns the Canadian record of 1:58.39. In June of 2013 she told Athletics Illustrated, “I take it one year at a time. Having said that I would be lying if I hadn’t thought next year’s Commonwealth Games in Glasgow was not appealing.  I have a good relationship with the CWG. It would be my 5th.”

Other strong competitors for Canada, who could be in the mix for Glasgow, are 2012 London Olympian Melissa Bishop who hails from Eganville, Ontario. She owns a personal best time of 1:59.76 and Jessica Smith of North Vancouver with her best of 1:59.86. Victoria’s Lemlem Bereket has squeaked under the B-standard a couple of times, her best is 2:00.82. Montreal’s Karine Belleau-Beliveau and Vancouver’s Helen Crofts round out the top Canadians, they have run as fast as 2:01.79 and 2:02.10, respectively.

As for the Glasgow Games being on her radar, Francois added, “That’s also a big goal of mine. I don’t think it’s an unrealistic goal so that’s what I’m shooting for!”