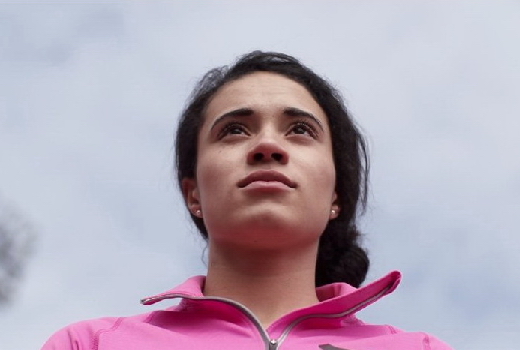 Rachel Francois is a Victoria-based athlete (from Edmonton, Alberta) who competes for the University of Victoria Vikes, one of Canada’s top varsity teams and a perennial powerhouse in the 800 metre distance; Francois’ specialty.

Last summer she raced several times while she toured Europe to gain experience while competing at a higher level. At that time the 22-year-old told Athletics Illustrated, “Europe was a bonus! The fact that I didn’t have anything to qualify for let me race without pressure and fully take in the experience. I learned so much, about the travel aspect of racing as well as racing against a nice mix of new and familiar competition. The group I was travelling with was a lot of fun too…I learned a lot from them. The trip really gave me some motivation for the upcoming outdoor season and really showed me why I love this sport.”

She has started a crowd-funding campaign to help fund her efforts to train for international competition, with her sites on the Rio 2016 Olympic Games, as a long-term goal. Currently she hopes to qualify to compete in the 2014 Glasgow Commonwealth Games. She is nearly there. She has run as fast as 2:03.47 for the 800 metre distance. The standards that she needs to achieve are 2:00:00 for the A-standard and 2:01:50 for the B-standard.

There are several Canadian women who can qualify for the Commonwealth Games easily this summer, so it is likely that Francois will need to achieve the A-standard, which means she needs all the help from distractions she can get.

Some of the top athletes are Diane Cummins, Melissa Bishop, Karine Belleau-Beliveau, Jessica Smith and Lemlem Bereket. Canada will send three athletes that qualify to the Games, in each event.

Francois must prove competitive readiness at the Canadian Track & Field Championships in Moncton, New Brunswick from June 27th to the 30th, 2014.

My name is Rachel Francois, and I am a 21 year old 800 meter runner from St. Albert, Alberta. I have found my passion, and I decided to move to Victoria, BC after high school to train at the national training centre and run for the University of Victoria.

This year, my goals are to qualify for the Commonwealth Games in Glasgow, Scotland and to earn a podium spot at Nationals in Moncton, New Brunswick. I am focusing on qualifying for the World Championship games in 2015, and the 2016 Olympic Games in Rio.