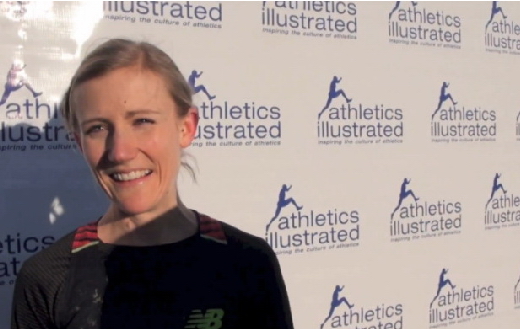 Saturday, May 2nd during the Payton Jordan Invitational at Stanford University, there will be five very competitive Canadian women racing the 10,000-metre distance. All will be seeking a their best performances in order to qualify for the 2015 Toronto Pan-American Games or the 2015 Beijing IAAF World Track and Field Championships.

Toronto’s Rachel Hannah is one of them. She will be up against Vancouver’s Natasha Wodak and Rachel Cliff, as well as Natasha LaBeaud of Montreal and London Ontario’s Lanni Marchant.

Asked about her current fitness, she told Athletics Illustrated, “Fitness is good coming off the world cross-country champs. Training this winter went well. I was able to put in my best mileage stints ever from the past winters. It was one of the coldest winters on record for Toronto, but the adversity added to the challenge and development.”

They are fairly evenly matched.

This weekend Wodak will be seeking to win the Vancouver Sun Run. She is a two-time past winner and has run the race as fast as 32:42, from the 2013 edition. Wodak also owns the national record for 8K on the road, which is a stunning 25:28 from the 2013 Pioneer 8K that took place in Victoria, BC. She is also a past winner of the national cross country championships. Wodak said, “I’m definitely the fittest I have ever been in my life so it (Payton Jordan race) is exciting!”

Marchant is the national marathon and half-marathon record holder with her bests of exactly 2:28:00 and 1:10:47. She ran her 10,000m best on the Stanford track this year on April 3rd finishing in the impressive time of 32:11.06; one of the all-time fastest Canadian 10,000m performances.

In regards to her spring and summer goals, Hannah said, “I will try to set new PB’s at 10K and the half-marathon distances this summer and if I’m fortunate to qualify for a national team, that would be amazing! Toronto will be on an athletics high this summer with hosting the Pan Am Games.”

Hannah likes to race over a range of distances, rather than specialise in one event, as many runners tend to do. “The objective this year is to keep the diverse range if I can and to still set PB’s from 5k and up. I enjoy racing track, roads and cross-country and it keeps it fun and differentiated. One day I would like to try a marathon, but the timing would depend on when I know I’m ready to do my best at it and be fully prepared.”

Through the winter Hannah’s training volume has been in the range of 70-85 miles (115 to 135K) per week with sometimes 35% of that weekly volume in longer tempo runs. “I’ve been doing all single runs per day because working sometimes 50 hours in a week as a Registered Dietitian makes it tough to do doubles. I do quality sessions twice per week and they are usually 7-10K in volume. This past winter was a lot of up to 1600m hill work sessions to get ready for World XC,” said Hannah.

Those mile-long hill sessions appeared to work for her as she improved her World’s finish positioning from 58th in 2013 to 25th in 2015.

“The weekly long run I’ll run an extended segment up to half-marathon goal pace in a continuous run.”

To qualify for the Pan-American Games Canadian athletes will need to be first or second fastest in their event during the qualification period. To qualify for the 2015 IAAF World Track and Field Championships the IAAF standard is 32:00 for women.

The Canadian 10,000m record is held by Courtney Babcock, who crossed the line in the time of 31:44.74 during the 2003 Payton Jordan Invitational.

The Payton Jordan Invitational with its notoriously fast track may see five Canadian women who, outside of placing, will have deserved to race in the Pan-American Games this summer, only two will go and only three can go to worlds in one event.