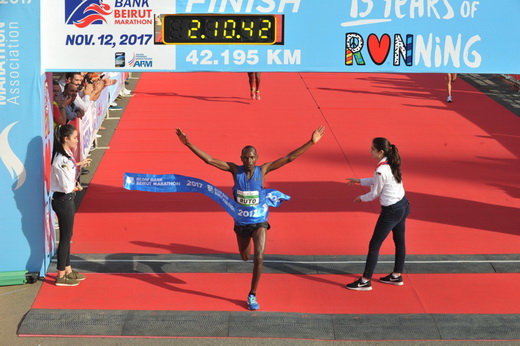 Things went almost exactly the way organizers of the Blom Bank Beirut Marathon had wished for when in the span of eighteen minutes both the men’s and women’s event records fell today. But the 15th running of this IAAF Silver Label race yielded two new champions.

Dominic Ruto of Kenya was the surprise winner of the men’s race claiming victory in a sprint up the finishing straight in a time of 2:10:41.

Ethiopia’s Adane Amsalu also went under the old record coming home just four seconds behind Ruto. They had been together with one hundred metres remaining and only Ruto’s superior sprint separated them.  Defending champion Edwin Kiptoo ran 2:11:56 to finish third. He pointed to pain in an achilles tendon for preventing his successful title defense.

“When I was at 38km I realized my body was good and I realized that I could catch them because there were three in the front,” said the winner. “My body was ok and so I managed to  push and to catch them at 40km.”

The women’s race also saw the crowning of a new champion though it was not entirely unexpected.

Bahrain’s Eunice Chumba is really in a class above the rest having run a personal best marathon of 2:24:27 this year in Rotterdam followed by an Asian Half Marathon record of 1:06:11. When she decided to separate herself from a trio of strong Ethiopians, including the defending champion, Tigist Girma, she simply bolted.

Girma took second in 2:29:00, a new personal best and then sought treatment for a sore leg. Her compatriot Debebe Getachew also set a personal best finishing 3rd in 2:30:31.

“I came here to win the race,” said Girma, who is also 24.  “but I had a little bit of pain in my leg and this Kenyan woman is a very strong. This time I finished second.”

Lebanon’s national record holder and four-time Olympian Chirine Njeim had planned to support the event by running with her sister Nesrine. But as she would say later she ‘got carried away.’ 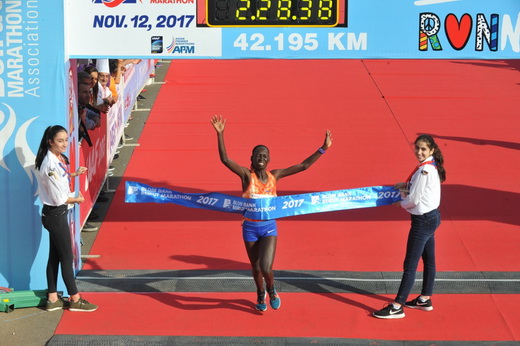 Just five weeks after her 2:39:21 clocking at the Chicago Marathon – a time that took almost five minutes off her previous national record – she finished today in 2:45:07. That is her fastest ever time on the streets of Beirut.

Meanwhile, just two days after the press conference where he complained he is aging, Hussein Awada, 43, was the Lebanese male finisher. He ran 2:34:20 to finish 10th overall.

More than 48,000 answered the call to support peace and unity participating in races for children, those with special needs, as well as the 21km and full 42,2km classic distance.