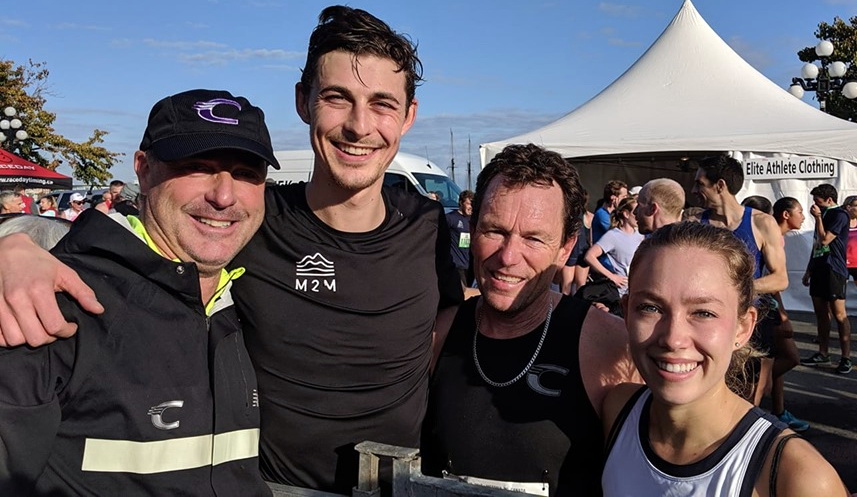 When Joan Rivers was asked about fitness and potentially running, she quipped, “The first time I see a jogger smiling, I will give it a try.”

Smiling among the throngs was first-time winner Eric Finan of Eugene, Oregon.

“That was great, I’ve never won a marathon before,” said Finan.

Finan said that he chose Victoria because his wife had suggested the location as they haven’t been on Vancouver Island before – first time for everything – as it looked very nice. “And I am glad I did, it is a beautiful course and running along the waterfront was so nice.”

Finan won in the time of 2:17:51, one minute and eight seconds off of his personal best time (2:16:43), which he ran at the California International Marathon in Sacramento in 2017. Victoria was a better performance than Sacramento considering the rolling nature of the course.

Finan got to work with Kenyan Kipchirchir Chesoo (2:10:27) for much of the race, but at the infamous 20-mile (32K) mark, Chesoo began to struggle.

“We came to the top of a hill around 20-miles and I could tell he was struggling; we were slowing. So I felt that this is the time to drop him and it worked out.”

Finan, who is an engineer and is originally from Cincinnati, Ohio, will be going for the USATF Olympic Trials in Atlanta in February 2020, to attempt to make the US team going to the 2020 Tokyo Olympics.

“I am an engineer and am very data-oriented and realistic too and I know that I have a very slim chance of making the team, I will likely have to run around 2:09.”

“I wasn’t expecting to win. I am pretty happy with the result,” said Lee. “I could tell Catrin was just behind me, but we didn’t work together too much, but I know finished right behind me.”

Third in the men’s race was the first master Kip Kangogo from Lethbridge, Alberta in the time of 2:21:49. The third female was Madeline Yungblut in 2:53.27 it was her first time running the 42.195-kilometre event for the former middle-distance runner.

There were 916 finishers in the marathon.

Florez’s previous two showings in Victoria parlayed into good marathon runs at the CIM in Sacramento – the US Championships.  In 2018, he ran a new best of 2:16:12 at CIM. “I closed the second half of that marathon in 67-minutes and went out at 69, but I was in better shape by December and I expect to run well there again,” said Florez.

Norris travelled with Cleo Boyd of Kingston, Ontario. She won the women’s race in the time of 73:38 a new personal best time. The graduate of the University of Virginia is now back in Kingston working with her father – a well-known coach – Steve Boyd of Physi-Kult Running – both athletes were wearing the Physi-Kult kit.

Asked if she will take in a cross-country season, which has already started, she wasn’t sure, “I am 50-50 on the idea of cross. I have gotten injured a few times, so I am thinking about it.”

She may end up competing in the Payton Jordan Invitational in May – where many athletes run their lifetime bests.

In the 8K Turkey Trot race, Justin Kent of Burnaby broke the 33-year-old record previously held by Gary Barber with a 23:14 performance. Likewise, Langley’s Sarah Inglis (Scottish athlete), took Ulla Hansen’s 28-year-old event record by finishing in a big new personal best of 25:43. Her previous best was 26:47 – albeit on a hillier course.

The results indicate that not only she was the first female finisher, but crossed the line in fourth position overall.

“I totally did not expect to go that fast, to be honest,” said Inglis. She works with the Mustangs Endurance Group with coach Mark Bomba, while Kent is working with Richard Lee of BC Endurance Project (BCEP).

Asked what precipitated the record-run Kent said, “I have been working with teammate Luc (Bruchet). He is in good shape and is travelling shortly to go after the Tokyo 5,000m Olympic standard.”

Both Barber and Hansen were international athletes for Canada competing in multiple Commonwealth Games and world cross country championships.

Nick Walker of Victoria finished second in the time of 25:31, while Nicholas Browne finished third in 25:34.

Walker upon finishing said to Inglis in the finish area, “I saw you ahead there for a while – you were flying out there.”

Browne finished behind Inglis during the 2019 TC10K, both were pleased with each other’s performances at GoodLife.

Sunday was a big day for women’s running when Kenyan Brigid Kosgei won the Chicago Marathon in a new world record time of 2:14:04. She had two male pacers and went out for the first 5K on pace for a 2:10 performance – a time that would leave people shaking their heads – 2:014:04 is already an outlier performance. When Paula Radcliffe set the previous record of 2:15:25 in London 2003 – it was a head-scratcher. At one point the International Association of Athletics Federations took the record away from her due to employing pacers. Kosgei’s run defies logic.

As for Browne will be competing in the 2019 CIM race to look for a new marathon personal best. The Vancouver runner is also a triathlete.

Four-time winner Lindsay Carson and training partner of Inglis’s finished second in the time of 27:32 and third was Maor Tiyouri a marathon runner who represented Isreal at the 2016 Rio Olympics. She currently works with legendary UK marathon runner Steve Jones in Colorado.

“I am coming back from injury, so it was nice to finish the race feeling good,” said Tiyouri.

Tiyouri will be hoping to represent Isreal at the 2020 Tokyo Olympics.

There were 2237 finishers in the 8K, 2887 in the half-marathon and 916 in the marathon for a total of 6,040 finishers not including over one thousand in the kid’s 1K run. The event is up in registrations from recent years with over 8300 total registered in all events. Sunday was the 40th anniversary of the race weekend, which was originally named the Royal Victoria Marathon.