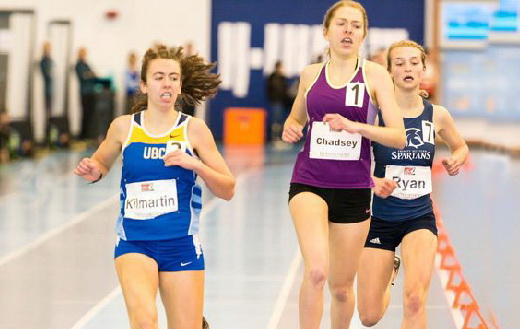 It was a record day for records Saturday at the 2016 Vancouver Sun Harry Jerome Indoor Games.

When the six-hour, 60 event track meet ended at Richmond Olympic Oval, 21 meet records had been broken. In eight of those events, the second place finisher was also better than the old mark. And in yet another event, all three finishers were better than the old record.

Doug Clement said on behalf of the Achilles Society, “The youth of British Columbia have shown that the 21st century is the new age of accomplishment in the sport of Track and Field with records falling in every age division.”

It is hard to highlight one event because, simply, there were so many.

You could also single out the final of the Youth (16-17) women’s 600-metre final where two Ocean Athletics’ runners, Jessica Williams and Danielle Steer raced as a team towards the finish line with Williams just beating her teammate by a step. Williams’ time, 1:38.75, Steer 1:35.76. Both broke the existing record of 1:41.97