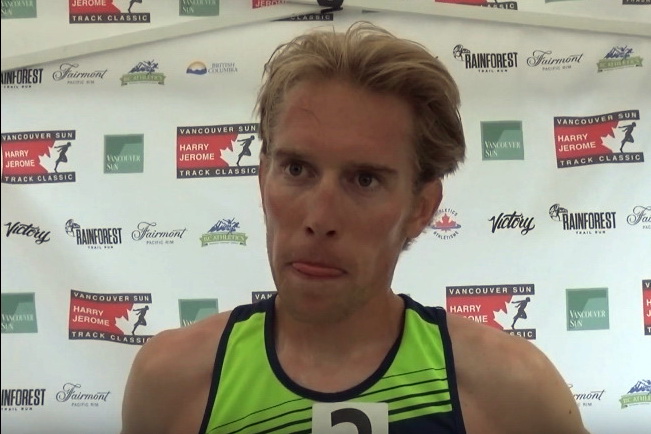 Considering who he surrounds himself with, it is indeed no surprise, as his coaches are Deena and Andrew Kastor and his agent is Josh Cox.

Deena Kastor owns the American marathon record at 2:19:31 which she set at the 2006 London Marathon. Cox ran more than a dozen marathons in sub-2:20 during his career including his best in Houston 2012 at 2:13:50. He currently holds the national 50K ultramarathon record. Buchanan will be racing his first marathon in Arizona on Sunday, Dec. 20 at The Marathon Project, which Cox happens to be organizing.

Moving up to the half-marathon earlier this year was apparently a step in the right direction. As it turns out, he performed quite well in Houston in January with a 61:45 finish time. Asked if that half-marathon gave him the motivation to consider the marathon he said, “[The] Houston half was, at the time, just prep for the 10,000m at the US Olympic Trials.”

Regarding that Houston performance

Regarding the half-marathon in Houston, he added, “We wanted to focus on strength throughout the winter and thought I could run somewhere in that range but definitely we were thinking short term with the trials coming up. However, my support team is very marathon centric with the Kastors, and Josh Cox being in my corner during the past four years,” said the 27-year-old. “So, when the opportunity came up to do a marathon during these unprecedented times, it wasn’t a long thought process to say yes.”

After graduating high school, the Manhattan, Kansas native ended up running in the NCAA for the University of Portland. His best showing there may have been a fifth-place finish in the 10,000m event at the NCAA Championships. Buchanan finished in the time of 29:13.40, less than four seconds behind Edward Cheserek (29:09.57), who has gone on to run as fast as 27:23.58 — that’s pretty fast company.

Buchanan is now a member of the Mammoth Lakes Track Club which has produced 14 Olympians, 64 national champions, and 29 American records.

Asked how training has gone for his first marathon cycle he said, “Training went really well, I think. I don’t really know because I have zero experience in this sort of training.”

Regardless, he is pleased with running just eight seconds off his personal best during the big training week.

Mammoth Lakes has very mild weather so we were able to do a lot of training on the hilly, high altitude terrain that is usually not runnable come November. Session wise, the only real difference between this training and my typical 10k and half-marathon training was that the tempo type workouts got longer. I never really went longer than 9-10 miles in the past. For that sort of long threshold stuff, we topped out at 15 miles one week at marathon pace, building up to it over the previous weeks. Ultimately none of this work matters if it doesn’t come together on December 20th but for now, I believe we did everything that the marathon legends of Mammoth Lakes did in the past to have success.”

So, in that case, the rest is up to Buchanan as he enters his taper for The Marathon Project.

Currently, Buchanan is the highest-seeded runner who is debuting based on half-marathon times:

Full details and a complete entry list are available at The Marathon Project.