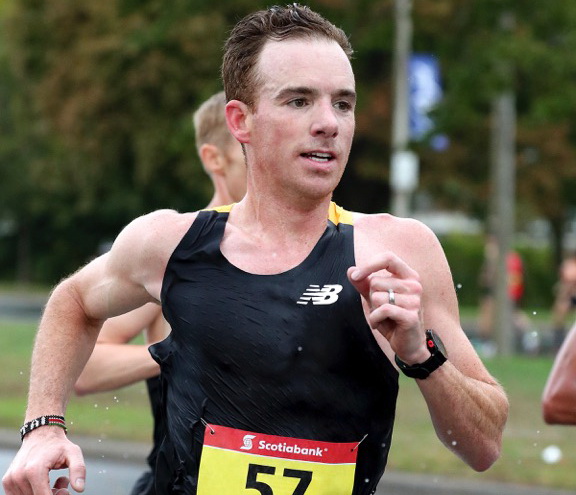 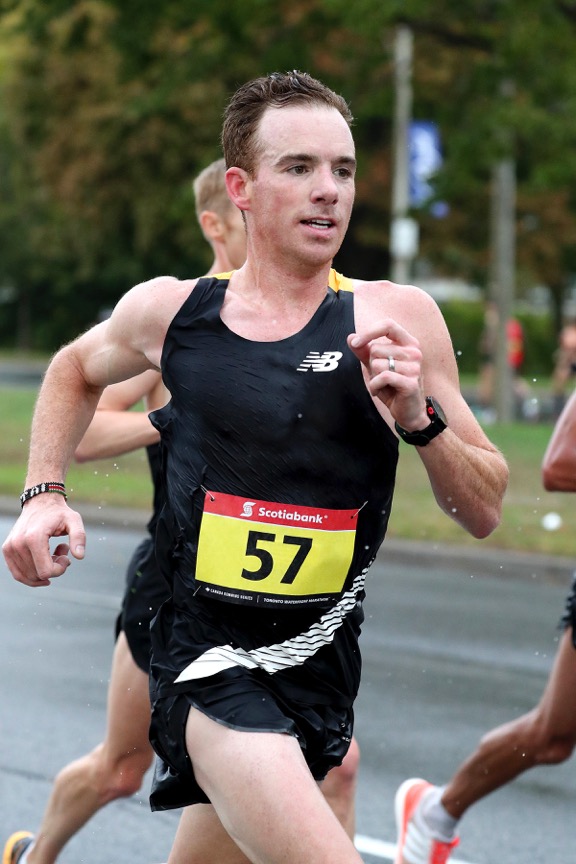 Two-time Canadian Olympian Reid Coolsaet wants it known that rumours of his retirement are greatly exaggerated, even as marathon enthusiasts are busy penciling in their choices as to who will be the ‘next generation’ of Canadian marathon runners.

As if to underscore his sudden status as ‘not nearly retired but simply maturing’, the 38-year-old Hamilton, Ontario resident, and New Balance sponsored athlete, has confirmed he will race the 2018 Scotiabank Toronto Waterfront Marathon on October 21st.

And in a test of fitness following his surprising 9th place finish in Boston earlier this spring, Coolsaet will also tackle the upcoming Toronto Waterfront 10k on June 16th.

Coolsaet has the closest time to Jerome Drayton’s highly coveted national marathon record (2:10:09) than any other Canadian, running 2:10:28 at the 2015 Berlin marathon, and he appears eager to finally achieve this goal. With the Scotiabank prize for beating the record in Toronto now at $43,000 – a thousand dollars for each year the record has stood – Coolsaet would easily find use for such a princely sum. He and his wife, Marie, recently welcomed their second child, Elodie Virginia, into the world and renovations to their Hamilton home lie ahead.

“It has been a while, about a year and half, since I ran 2:10:55 (2016 Fukuoka). Even if it’s not possible I still think of (sub 2:10) when I am training and I use it to push me along and keep me motivated. It’s something that has been motivating me for about eight years now.”

Injuries tend to take longer to heal as one matures and Coolsaet has been through some debilitating ones. Most recently and most seriously was the bout of osteonecrosis in his metatarsals that restricted his training and threatened to completely derail him. But Boston was a significant response, as he bravely trudged home through the cold rain and windy conditions to snatch 9th place.

“I was hoping to get a good feel for my marathon fitness in Boston but because of the conditions I wasn’t able to do that,” he reflects. “The last 12k I wasn’t trying to maximize the training I had put in; I was just trying to keep the cold away and just move my stiff legs. I am happy with toughing it out there and happy I kept pushing and got 9th.  But, I really don’t know what I could have done in nice conditions on a normal course.”

“I knew I wasn’t in PB shape. If it was a nice day on a flat course, I wasn’t going to run 2:10 or 2:11 – maybe 2:12 or 2:13. Now being a month after Boston I know I am much further ahead (in conditioning) then when I started my buildup for Boston. So hopefully by training for 10ks for the next couple of months, I can start the marathon block further on. The last marathon I really pushed myself on was December 2016 so I like to think that not much has changed. But, of course, something could have. I am not getting younger.”

Coolsaet hasn’t raced the Scotiabank Toronto Waterfront Marathon since 2011, although he generously served as pacer a couple of times and also volunteered to help with the elite athletes’ hospitality. It was at the 2011 race that he, together with training partner and three-time Olympian Eric Gillis, achieved the 2012 Olympic qualifying standard as the pair impressed with 3rd and 4th place finishes in the IAAF Gold Label race. Reid’s 2:10:55 that day remains the fastest marathon run by a Canadian on Canadian soil.

Gillis is now coaching at his alma mater St Francis Xavier in Antigonish, Nova Scotia, but he hasn’t yet made a decision on his marathoning future. Both Coolsaet and Gillis are motivated by the knowledge that Carlos Lopes of Portugal won the 1984 Olympics at age 37 and Haile Gebrselassie was in his late 30’s and still running 2:06.

“It was awesome to train with Eric,” Coolsaet says of his friend and training partner. “Even when I was in Hamilton and he was in Guelph we would still do two workouts a week together and to have someone – our PB’s are so close – it really helped for the long workouts.”

As a father of two, Coolsaet has had to make adjustments to his lifestyle. Since he continues to train full time, he takes his son Louis to daycare for a few hours during the week.

“I get the bulk of my training done in the morning,” he explains. “It’s actually easy to balance. It’s much more fulfilling, whereas before (Louis’ birth) running was everything and now I think I have a more balanced perspective and have more time to train. And, I am sleeping enough so it’s going really well. I’m sure Elodie is going to offer some more challenges.”

Never one to panic or to lose sight of focus, he doesn’t discount the possibility of a third Olympic bid especially when the qualifying period opens up in less than a year. Much he says is dependent upon who is running well two years hence.

“I think I am in a good spot where I am able to still chase my dreams,” he says. “When I feel good I still feel really good. Workouts are quick – other times little injuries take longer to clear.”

“Sometimes I do feel my age, do feel a bit older. But if things go smoothly and I can get a good block of training in, I would like to think that I can still run a personal best.”