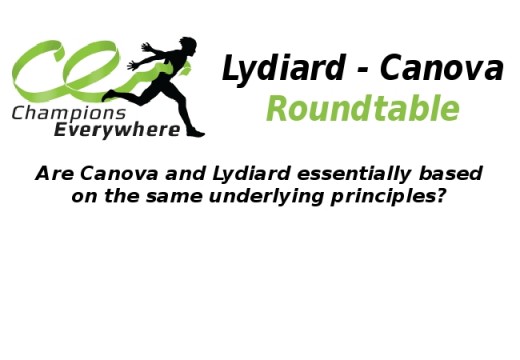 Are Canova and Lydiard essentially based on the same underlying principles?

Colin Livingstone: Canova is singing out of the same hymn sheet but does not realise it. Much the same as Cerutty and Lydiard and aspects of Gerschler and Igloi, Cerutty and Lydiard were chalk and cheese as individuals, but very similar in application. Long runs, hills, fartlek, effort sessions, striding and so on, for instance, Elliott ran 30 milers as an 800/1500 runner (ed: similar to the way Snell trained as an 800m/1500m runner).

A lot of these debates are trying to look at the same mountain from different directions and claiming their view is the ‘correct’ one. A bit like arguing what is the better colour: blue or red?

René Borg: So this is similar to what Lorraine explains in the article with Running Times, Lydiard Essentials, she uses the phrase “Principles, not formulas, are the keys to successful training”, she goes on to reference Ron Daws’ old quote that “good and bad training look exactly the same” but it depends on the contextual application of sound principles to each unique runner.

Nobby Hashizume: As far as I’m concerned, it’s almost silly and useless to talk about the DIFFERENCE between Canova and Lydiard because they are pretty much identical. Of course, they LOOK different when you ONLY look at Canova’s marathon program and Lydiard’s marathon program. The concept behind those two is almost EXACTLY the same. You talk to most of Japanese coaches and they’ll tell you that they do Lydiard. Of course, they don’t seem to look anything like Lydiard that you see in his books. Some other people probably do the same thing but may look a bit different and they’ll tell you as if they invented it from scratch. That’s just the difference in their attitude if you ask me.

The ONLY differences I can see from Canova and Lydiard is the concept behind hill training. Canova and I actually covered quite a bit with this hill training, why and how and where he came about this idea – his alactic short hill sprint. It sort of makes sense but I personally would not recommend it UNLESS you’re already strong enough. It actually makes sense with some of top level Kenyan runners who may race almost year-round or some big cash race pops up all of a sudden and you may need to get ready for it in 6 weeks. But what has happened today is that many young aspiring runners will read it, or read about Hudson using it, and they will go out and try it themselves when they have NO idea when they may race next. Then what will happen is, in Arthur’s words, they will have no idea when they’ll peak.  A workout like that would sharpen you so quickly that you may get ready to run fast in 3 weeks; but of course your real race may not come until, say, 12 weeks from now. Then you may face the classic case of running your PR in March but, by the championships race in June, you are completely over the edge and have no idea what had happened.