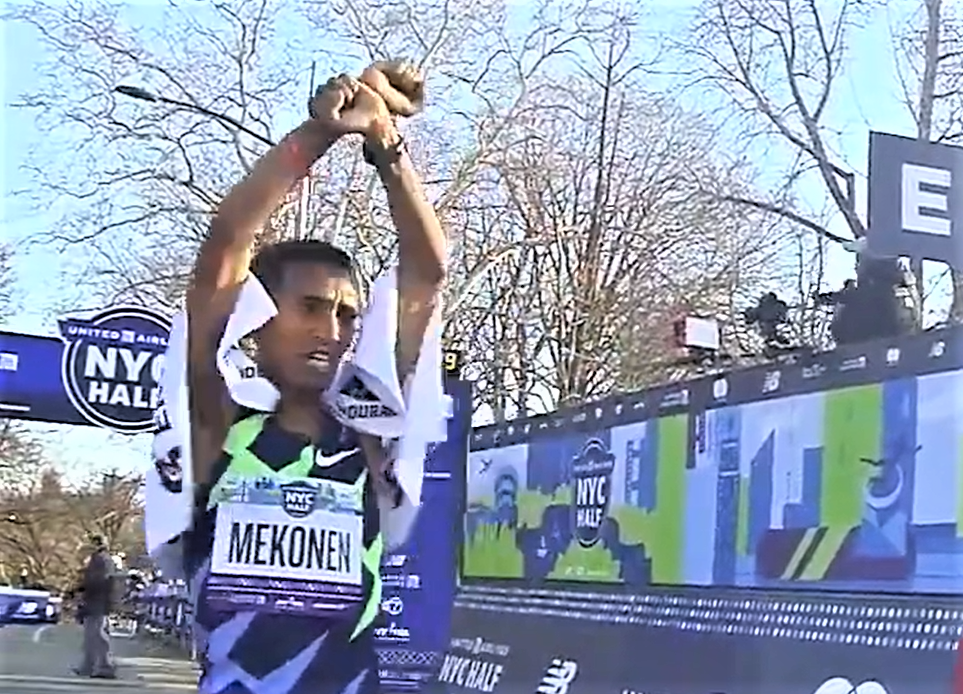 The phrase, “Fortuna audaces iuvat” or one of its many English variations, “fortune favours the bold” may be applied to Sunday’s New York City Half Marathon winners. Kenyan Rhonex Kipruto and Ethiopian Senbere Teferi, ran hard for the wins and set new course records along the way.

Kipruto, the world record holder over the 10K distance on the roads (26:24, Valencia 2020), took off at the gun looking to challenge a deep field of would-be competitors. As one of the fastest half-marathon runners in the world with his Valencia 2020 performance of 57:49, Kipruto still needed to run bold. His best is the fourth-fastest performance all-time. The world record is 57:31 by Ugandan Jacob Kiplimo.

Kipruto set off with the lead pack running through 5K in the time of 14:27, which would put him on pace for 60:30. Through 10K he was on pace for 59:50 (28:22). By 15K he was back over 60-minute-pace. The second 5K knocked some of the pack off the pace a little. There were just three to the line and Kipruto kicked only as hard as he needed to for the win and the new course record with his 60:30 performance on a near-perfect New York spring day.

They said it was the best field assembled…they were right. #UnitedNYCHalf

Canadian half-marathon record holder Rory Linkletter ran well for 10th place clocking a 62:19 finish time. His best is 61:08 from the Chevron Houston Half Marathon in January. The top American was fourth-place Shadrack Kipchirchir in 61:16. Canadian Tristan Woodfine also ran well. Seeded 28th he finished in 19th place overall in the time of 63:47.

Fifty men clocked times under 70-minutes over the rolling course.

Mekonen added a protest by crossing his arms over his head at the finish chute area. He was protesting the genocide in Tigray. he shouted “stop Tigray genocide,” to bring the world’s attention to the unrest in the Tigray region of Ethiopia.

Senbere Teferi also outkicked her competitors to the line for the win and the new course record. She clocked a finish time of 67:35. Two seconds back was Irine Cheptai of Kenya, while third-place finisher was Norwegian Karoline Grovdal in 68:07. For Grovdal, a four-time national record holder, the NYC performance is a new personal best. She is known for her 3000m steeplechase running and taking a bronze medal during the European Championships in both that event as well as the 10,000m.

In 2021, Teferi turned some heads when the 26-year-old took the world road 5K record clocking a 14:29 finish time at an event in Herzogenaurach, Germany. Cheptai’s standout international performance was when she won the gold medal at the 2017 World Cross Country Championships in Uganda.

Great day in NYC! Weather was awesome, Legs felt good & happy with 7th place! Grateful for the opportunity to race against such a stellar group of ladies- @nyrr put together a great race! Special thank you to @nyrr_pro for taking such great care of us elites! pic.twitter.com/VG7V04lKBt

Similar to how the men ran the first 5K was slower than the second at nearly 69-minute pace recording 16:20. The second 5K, put the lead pack into the mid-67-pace with the more favourable hills.

The top American was Lindsay Flanagan who took fifth place in the time of 69:50. British athlete Charlotte Purdue finished sixth in 69:57. She was left off the Olympic team and perhaps is very motivated to prove the national selectors wrong. The first master athlete over age 40 was Canadian Natasha Wodak. She clocked a 70:01 finish time which is faster than Malindi Elmore’s Canadian masters record of 72:16 from 2021, but will not count due to the point-to-point layout of the course. Elmore and Wodak sometimes train together. The two went ninth and 13th, respectively, at the Tokyo Olympic Marathon in Sapporo last year.

Wodak’s personal best is a former national record of 69:41. She looks to break the current national record soon which is held by Andrea Seccafien at 69:38 from Muragame, Japan two years ago. Seccafien also took Wodak’s 10,000m record with a 31:13.94 performance from May last year. Seccafien finished in the time of 71:33 Sunday in New York.

Finishing 12th was Sara Hall of the US, who has had a very strong past couple of years in the marathon. She set the American half-marathon record in Houston in January with her 67:15 performance.