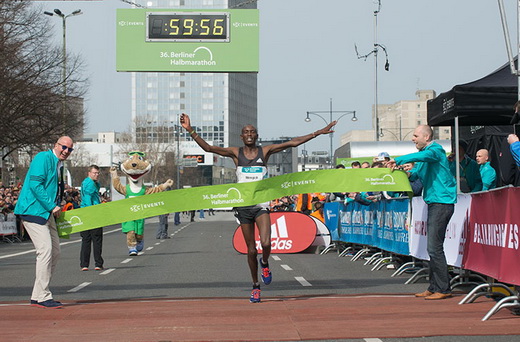 The Berlin Half Marathon confirmed its position as Germany’s biggest and fastest half marathon race once again. Richard Mengich returned to racing and on his 27th birthday he had every reason to celebrate. The Kenyan claimed his biggest career win in Berlin, clocking a personal best of 59:58. Pre-race favourite Elizeba Cherono, who recently switched her nationality from Kenya to the Netherlands, took the women’s race with 70:43. 32,753 runners from 103 nations entered the 36th edition of the Berlin Half Marathon.

The pace in the men’s race was pointing to a finishing time of around 60 minutes early on. However the leading group quickly shrinked because Richard Mengich and Eritrea’s Simon Tesfay pushed the pace. They passed the 10 k point in 28:35 with Emmanuel Ngatuny already a bit behind. Germany’s Arne Gabius was fourth, trailing the leaders by around 100 metres. Mengich, who ran the Berlin Half Marathon for the fourth time, was eager to improve his personal best of 59:59. He ran that time in Berlin a year ago when he was fourth. „It was windy during the second half of the race, but I desperately wanted to break the one hour mark,“ said Mengich, who then left behind Tesfay soon after 10 k.

Running on his own in the second half Mengich managed to achieve his goals, but it was as close as it gets. The Kenyan won the race in 59:58, improving by a single second. „I suffered of a stress fracture last June and was injured for a long time. This was my first race after the injury. So I am very happy with my result,“ said Mengich. Well behind him Tesfay took second in 61:00 with Ngatuny following in third with 62:07. Germany’s Arne Gabius was fourth in 62:45. It was the best performance by a national runner in this high-class race since Carsten Eich won back in 1993 with 60:34. Former World Half Marathon Champion Wilson Kiprop of Kenya, one of the pre-race favourites, dropped out at around 12 k.

In the women’s race Susan Jeptoo took a commanding lead early on. Originally from Kenya she now competes for France. Jeptoo passed the 10 k mark in 32:45 minutes and was 33 seconds clear of Elizeba Cherono. However Cherono, who was second in Berlin a year ago, gradually closed the gap during the second half of the race. It was in the final kilometre when she finally overtook Jeptoo. „I am very happy with this victory and it is my aim to run for the Netherlands in the European Half Marathon Championships in July,“ said Cherono. Susan Jeptoo took second in 70:49 and Poland’s Agnieszka Mierzejewska followed in third place with 71:41.