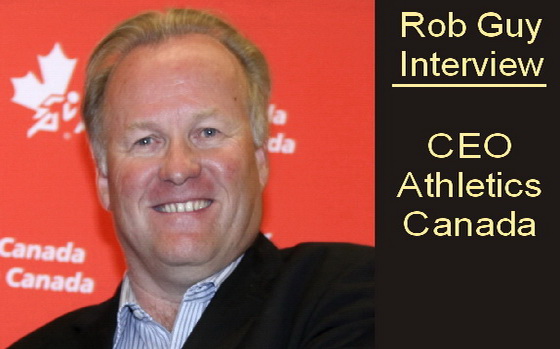 Rob Guy took over as CEO of Athletics Canada in October 2010 and has led a number of initiatives aimed at improving the depth and breadth of the sport of athletics in Canada as well as increasing communication and raising awareness of the sport. As the organization moves on from the 2012 London Olympic Games, Mr. Guy recently made a few personnel changes aimed at re-organizing and re-energizing the organization with a look towards 2016 Rio de Janeiro Olympic Games.

Andrew Maloney: One of your stated goals for the sport in this country upon taking over as CEO of Athletics Canada was that different groups start working together more cohesively. What progress have you seen in this area?

Rob Guy: It has been limited in some areas and certainly not as much as we need but I am quite optimistic for the future that it will continue to get even better. I think some of the changes we made last week (relieving Chief High Performance Officer Martin Goulet and Head Coach Alex Gardiner of their duties) were partly performance driven but also partly about a different leadership style that is a little more cooperative than what has been done in the past.

AM: When you say cooperative do you mean with you personally or with other stakeholders?

RG: I am talking about Athletics Canada being more cooperative with other stakeholders. I can be personally cooperative but it only does so much if it is not the organization being that way. I am talking about working with branches, clubs, universities, personal coaches and athletes. We are all on the same team in this country and we need to be together to build the kind of organization we want.

AM: One of the reasons for the personnel changes you cited publicly was that this was a “performance” business and that Canada fell short of its goal of three medals at the most recent Olympiad. That being said, we very easily could have ended up with 3-4 medals and if that had happened would these changes have been made or were there also other reasons?

RG: I am not going to say the only reason (for the changes) is because we got one medal. There is a fine line. There are a number of factors but performance was a big one because it’s very obvious and a lot of our funding is tied to that. I have too much respect for Alex (Gardiner) and Martin (Goulet) to get into a philosophical debate. I just know where I want to take this organization and I want to make sure we’ve got the right people in place to do that

I don’t think our performance in London was terrible. We got one medal but we had eight top 8’s and 17 top-16s and were ranked 15th as a country. Plus a lot of our young guys who are going to be in Rio did well. So its part performance but also part building for the future and making sure we have the right pieces in place for Rio.

AM: A few years into the “Own the Podium” program how would you characterise its effect on sport in Canada generally and athletics specifically?

RG: I think OTP is a great partner. They are what they are. Their mandate is to assist sports to win medals at the Olympics and we need to understand that. They would never be against increasing participation and encouraging development. That just isn’t their role. They are all about investing in potential and athletes with potential to win medals. Is it challenging? For sure it is, because there are conflicting agendas. I understand their support and appreciate it but also understand we need to run a balanced program and need to find ways of making (the development and participation) happen as well.

AM: What progress has Athletics Canada had in terms of becoming less reliant on government money?

RG: We look at a couple of things to generate new money and it is a priority because we are too reliant on government money. Hosting events is one way. It is not just a way of having a great event but also making money. One example is in March 2014 we will have the Canadian Indoor Championships, which we think will increase the profile of sport and at same time generate some revenues as well.  As well, making our national championship stronger and being more involved in the road running community. That in turn leads to more membership dollars. Sponsorship is tough out there but we do have a couple of folks we are having discussions with that will hopefully help out there. I am not going to say it is easy but there are a number of initiatives we are undertaking that collectively will help us get more revenues and those revenues will go into the participation and development side of things.

You never have enough money. We have a lot of money from OTP on the high performance end but it’s the whole development end that we need to look at. It was really important to me to fund the U-23 age group because that transition from junior to senior is tough and sometimes kids cannot get the development opportunities with the money. This year with FISU in Russia it is a priority for us and we have budgeted that to be a fully funded team

AM: In terms of events in Canada, how has the National Track League done in your estimation thus far?

RG: I look at it as in any event that has been around a couple of years. I think the first couple of years have been really good. There have been a ton of guys qualifying for Worlds as a result of NTL but there is still a ton of work that we need to do to make it a successful event. I think you look at any event and they didn’t start off where they are but took time to build. Do I think we did a good job? Yes, but I think there is some work to do to get five really good events and events that generate money for the sport as well.

AM: How do you see the criteria for carding evolving from a formula that has traditionally been tilted towards national training centers and recently age-biased?

RG: With regards to being centre-tilted, I would agree with you that when I got involved it was very much that way. I think forty points were based on where you trained and I felt that was too slanted. However, I also think where you’re training and who you’re training with is important. So we’ve reduced the number of points in half so it’s now twenty points instead of forty. Do I think it’s perfect now? No. I also want to know what the solution is and nobody has a perfect way to measure training environments.

With regards to age you have to remember this is athlete assistance money from Sport Canada and the objective is to produce athletes to become top-eight in the world. So once again there is a fine line investing in athletes we think are the potential versus the true performance as far as who ran faster. We have a committee that looks at that stuff and it’s important to me that it be a balanced committee.  We have some branch reps on that committee. Previously it was too slanted on Athletics Canada staff so I think the athlete reps as well as branch reps allow us to have a lot better conversation. And certainly we are open to that as well.

AM: How are relationships with the provincial branches?

RG: I am an old branch guy so I think it is better. We have monthly branch calls now. They are an important partner of ours and we are on the same team. It is important that we have these conversations; the hard ones as well.

AM: With the decision to let two people go also comes the search for someone new. What are you looking for in the next head coach and chief high performance officer?

RG: I think what I am looking for in a head coach is obviously the individual has to have some experience as a head coach at an international level. That’s important. I also think the person has to be a good communicator. We are a big country and communication is really critical so it is important to have a person who is genuinely interest in supporting our athletes and coaches out there.

We are actually going to be changing the structure as it relates to the chief high performance officer. It used to be that the head coach reported to the CHPO who reported to me. Going forward, I think the head coach has to be the one who drives the program and this is what we need to do to be successful internationally. We are going to change the name to high performance director and it’s up to me and the HPD to get the head coach what they need. I cannot stress enough how important communication will be. They need to be able to communicate with our membership.

AM: In your search are you confined to Canada or will you be opening it up internationally?

RG: I am looking for the best person and I would love it if that person came from Canada.

AM: What are your expectations moving forward?

RG: I believe that we are capable of better. For example, in the last Olympics the objective was to win three medals. I believe we can do that on a consistent basis. I think we have some great athletes and coaches and a good level of funding to help us do that. In order to accomplish that, we need to be working together and not against each other. As far as the upcoming Worlds we have set a target of two medals and ten for the Paralympic program. I believe that is a fair target and one that I think we will achieve.