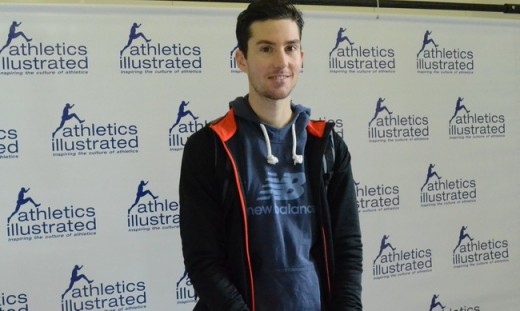 Running four marathons in seven months might seem excessive for any distance runner but for Canada’s Rob Watson it’s a challenge he welcomes with a smile.

The 30 year old London, Ontario native has confirmed he will run in the 2013 Scotiabank Toronto Waterfront Marathon on October 20th. Not only that, he expects to handily lower his personal best time of 2:13:37 – which he ran in the 2012 Rotterdam Marathon – at this IAAF Silver Label race.

Watson represented Canada in the World Championships in Moscow two weeks ago where he finished a very respectable 20th place. It was his second appearance at a World Championships. In 2009 he ran the 3,000m steeplechase in the Canadian vest in Berlin.

Earlier in the season he finished 11th in Boston (April 15th) then won the Canadian championship in Ottawa (May 26). Despite the fact most world class marathoners will limit themselves to two possibly three in a calendar year Watson remains confident.

“I am trying to listen to my body,” Watson says from his training base in Charlottesville, Virginia where his brother/coach, Peter, coaches the University of Virginia. “If I wasn’t able to handle it I wouldn’t do it. One of the main things about this sport is consistency and remaining healthy. It does look like a little bit of a risk but it’s a calculated risk. I am feeling fine and capable of handling this kind of work.”

Following his performance in Moscow he had his usual post race beers and undertook other more proven recovery procedures including massage therapy and strength training. Just a week after the race he went for an hour and a half run indicating he was recovering much, much faster than in other marathons.

“We are maintaining momentum and not having too much down time,” Watson says. “That can be risky but sometimes that’s what you kind of have to do. Aerobically we are very, very strong there’s a huge base to work off. With eight weeks to go I am really fit. We are going to do more half marathon training and we are really going to push the speed but also with the longer tempo runs. Overall the volume will be down but the intensity will be up.”

Pressed to reveal his goal for the Toronto race he hints that Jerome Drayton’s record of 2:10:09 is on the radar. That would make him the second Canadian to set such a high target in this year’s race. Watson’s former training partner, two-time Olympian Eric Gillis, has already spoken of going for such a fast time and the $38,000 bonus that is on offer for someone who beats the record. Scotiabank has put up the money as an incentive to Canadians.

“I want to go under 2:11. It’s time to get under that next level. We are going to aim for something special and we will see how that training progresses towards race day. But definitely I want to be under 2:11.”

The inclusion of Watson in the field is a blessing to race director Alan Brookes who prides himself on supporting Canadian distance runners. While Gillis and Watson may not challenge defending champion Sahle Warga of Ethiopia and some of the other elites, who have confirmed their entry, it signals a great leap forward for Canadian marathoning.

Three months after breaking his collarbone Reid Coolsaet is back running and has offered to act as pacemaker for the leading athletes in Toronto. At one point he had considered sacrificing himself for training partner Eric Gillis. Last weekend he surprised many with his clocking of 49:42 at the Bobby Crim 10 miler in Michigan but a year ago he ran a minute faster for the same distance. He admits he is not able to compete with the world class field in Toronto.

“Obviously I took seven weeks off running in June and July – absolutely zero running,” Coolsaet reveals. “It was going to be a battle to get ready for SWTM as I was cross training I kept the dream alive and that I would magically surprise myself when I started back up running and run STWM. I did a couple of weeks of running and I knew it wasn’t in the cards.

“I would like to pace the leaders. I am planning to go 25km in the Toronto race. If Eric can get a pacer that is going to take him longer than I would do that would be better for him. Typically six weeks before a marathon I like to get a faster than marathon pace effort in. So pacing Eric would be just running the same pace.”

Again, much depends on the weather conditions. The field will include some highly experienced runners capable of running under Kenneth Mungara’s  Canadian All Comers Record of 2:07:58. The Kenyan set that time in 2010 at Scotiabank Toronto Waterfront Marathon. For Rob Watson it’s all about getting to the next level and if that means a Canadian record, well that wouldn’t be bad for his fourth marathon in seven months.

For more information and entry: www.stwm.ca