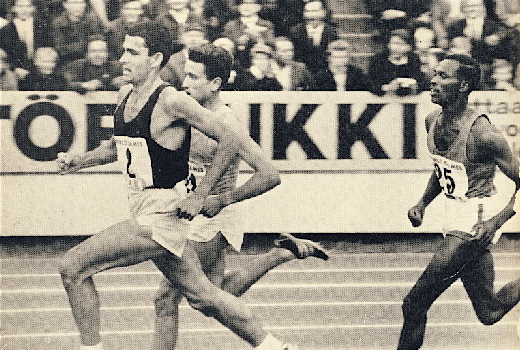 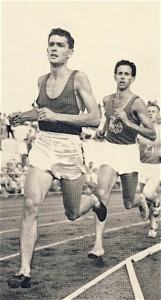 Ron Clarke is one of the greatest Australian athletes of all-time. The case can be made that he is also one of the greatest distance runners that the world has seen; a fact made no more poignant than by the infamous and gracious Olympic gold medal offering by the legendary Emil Zatopek of the former Czechoslovakia. Zatopek felt Clarke quite simply deserved it and slipped him the medal during a visit after the 1968 Mexico City Olympics.

Clarke comes from a family of high-calibre athletes, primarily Australian Football talent, including his own early competitive career in the game.

Clarke earned 19 world records in various distances from the two and three mile events to the 10,000 metres. Three times in 1965 he improved the world 5,000 metre record. He was the first person to run faster than 13 minutes for the three mile race with his stellar 12:52.4 result that he accomplished on July 10th 1965 in White City, UK. He is the first to run 10,000 metres under the 28 minute benchmark; a time that is perhaps not as poetic as a sub-4 minute mile as Roger Bannister demonstrated however; just as impressive as it was an improvement by more than a half a minute over the previous record.

He earned an Olympic bronze medal in the 10,000 metre event at the 1964 Tokyo Olympics as well as four Commonwealth Games silver medals from three miles, six miles and 10,000 metres.

Clarke is an athlete and writer and served as Mayor of the Gold Coast from 2004 to 2012. He is one of the best known middle and long distance runners from the 1960s and a true gentleman.

Christopher Kelsall: Would you suggest that Les Perry, Tony Cook and Trevor Vincent were important in your return to serious training at age 23?

Ron Clarke: A combination of them all – Les got me out running when we moved into a new house in his neighbourhood, then took me to train at Caulfield Thoroughbred grass racing course where the boys trained after work on a daily basis, and they took me to the hills each weekend which formed the background to my workouts, but I had no ambitions of being an international runner – just to get fit.

CK: So was there a turning point?

RC: There were not many actual turning points – I just continued to progress as we all did to a greater or lesser extent.  For example the first year I trained, Tony, Trevor and I were selected to the Victorian team for the Australian Championships in March 1962 where Thomas, Vagg and Power thrashed us.  Not many months later, in the National Cross Country Championships we beat them, and repeated our victories on the track in the Empire Games Trials later that year. One big breakthrough for me was beating Bruce Kidd, Thomas Keino & Bruce Tulloh in Perth at these Games. That I was competitive with the best in the world came as a bit of a shock but a great inspiration to keep on training.  Then in December 1963 I broke two world records in Melbourne and so it went on a steady upwards standard until the Altitude Games in 1968.

CK: Was there a point where you had to choose one sport over the other or did it become obvious that you were an exceptional runner and that running was the right path to choose?

RC: I never had to choose between football and running as a permanently bent finger meant I could never play football again.  Before then, right through my junior running days, football always came first.

CK: From time-to-time it seems Australian Football gains popularity in North America and elsewhere. Is there a desire to grow the game outside of Australia? 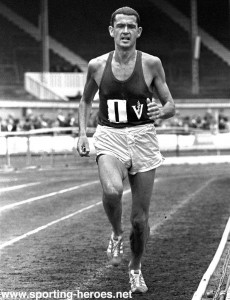 their own peculiar sets of rules and play. Both shunned the restrictive “off-side” rules that so limited the flow of other football codes and both became, by far, the most-watched sports in their respective countries. But unless you are brought up on the game in each country then you really cannot appreciate its subtleties and tactics. Besides which Australian rules, with 18 players from each team on the field simultaneously, often kicking the ball 70 to 80 metres, any ground as small as 180m in length and 150m wide makes the game overcrowded.  The game never stops and there are no restrictions on the movements of players, play is a bonanza of movement and strategies. Having good stamina and speed is an essential for all players.

CK: Winter Olympics are on now, are you interested in watching them?

RC: Yes although we do not get a very good coverage given the time difference.  When we lived in the UK we enjoyed them more and I have to say competitions where the athletes are judged on technique rather than results leave me cold and there seems to be more and more of these type of events in the ever-expanding Winter Olympics program.

CK: You demonstrated a great range from middle-distance to the marathon. Which do you feel is your best performances?

RC: Probably my best run was the 10,000m world record in Oslo. Although the 10k in the Mexican Olympics in 1968 was also one in which the “flow” was there but unfortunately the altitude made a good result impossible. It certainly had an enduring effect on my heart as I am still suffering as a result of those IOC idiots selecting Mexico City as a venue for long-distance (>1500m) competition. The run will certainly shorten my life by 5 – 10 years, something you do not think much about at the time, but by the time you reach the age I now have, every year becomes very precious.

CK: How are you suffering today?

RC: My artificial heart has caused me all sorts of blood circulatory problems even though my blood pressure remains at around 100/45 and beats per minute from 35 to 40. I’m told one side of the heart has difficulty functioning at all. From this there are all sorts of internal ramifications.

CK: Interesting that Mexico City was chosen over Buenos Aires, Detroit and Lyon, as none of those cities are at altitude and there are many events that are considered “endurance-based” not just athletics. How were those games managed in your opinion as an athlete?

RC: I loved running in Europe which had, as far as I was concerned, the perfect climate so Lyon would have been ideal – but I would not have had any problems with either of the other two venues in Detroit or Buenos Aires.  The Mexican Olympics were well organised – in fact I thought they were better managed than Tokyo was four years previously from the athlete’s point of view.  The only problem was the altitude while the food in the competitor’s village was quite awful in Tokyo, but when we told them what was wrong (such as toast only toasted on one side of the bread) they would nod their heads and agree and then serve you the same stuff the next day).  They tried hard but they hadn’t been westernised enough by 1964. I’m sure their next effort in 2020 will be much better.

CK: Was there civil unrest in Mexico City when the games started?

RC: We heard about it and there were lots of talk about the University students being mowed down by troops at the Village but nothing was ever confirmed until many months after the Games had been completed.

CK: During your time away from running from age 20 – 23 apparently you were playing Australian Rules Football. What level did you compete in?

RC: I had always played Australian Rules as my main sport. My father was a champion player from 1926 to 1939, my elder brother Jack a legend from 1952 to 1967 (he then coached) but they both played in the top League. I played in the under 19’s from 14 years of age until 1956, then with the Reserves until 1960, then with a country team, Hastings, near where we lived after Helen and I married in 1959, from 1960 to 1962 when I severely broke the ring finger on my right hand. It was set in a permanent crooked position (rather than amputate it).

RC: Yes I still follow the sport – in fact all sports (I always have).

CK: What do you make of the progression of the men’s marathon – being down to 2:03?

RC: I have long thought 2:03 for the marathon was only a matter of time but the two hour marathon is something else again.  Someone, sometime will no doubt run it but not in my lifetime.  After all Derek Clayton took around four minutes off Bikila’s best in just one enormous effort around 50 years ago and it has taken all of those 50 years for the record to improve by just 5 minutes or so. I’d estimate it will take all of that period and more for the record to reach the magic two hour barrier.

CK: What are your thoughts on cross-country being included in the Winter Olympics?

RC: I think there should be a cross-country distance race in the Olympics be it staged in the Summer Games as it once was, or the Winter 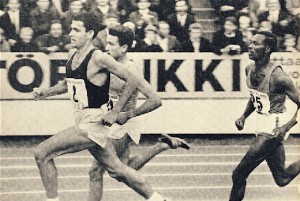 Olympics although currently it would undoubtedly be dominated by Kenyans and Ethiopians there may come a time in the distance future that this will change.  Anyhow the domination of results by one particularly country has never been a deterrent in the past and the Track and Field program for the Games has not varied much since 1896 except the addition of the women’s events and the scrapping of the standing jumps.

CK: Do you keep your Olympic Gold medal that Emil Zatopek gave to you, “because you deserved it” on display at home?

RC: Yes I still have it – I have loaned it to our local sports museum together with all my world record plaques, Australian, Commonwealth and Olympic medals.

CK: I bet that cleared up some space in the house.

RC: Helen never thought trophies should be displayed in the house so all of my medals, trophies, plaques, etc were always stored away in the basement, outside store or garage so I am afraid there was no extra space created anyhow.