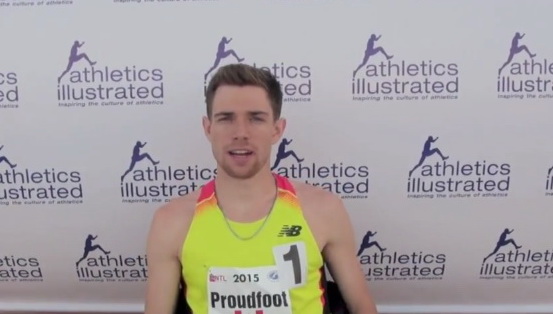 The 2015 Canadian Cross Country Championships offered up some of the deepest fields in the event’s history, especially the senior men’s race. Although we didn’t get to see 2012 London Olympians Cameron Levins and Mo Ahmed or the up-and-coming Justyn Knight – the type of athletes that could nearly guarantee a win, the top-21 finished within a minute of each other, which made for an exciting two-and-a-half kilometre final lap.

The first nine finished within 14 seconds of each other, led by Speed River Track and Field Club athlete Ross Proudfoot, who was one of the primary pre-race favourites. He won in the time of 30:06.90, while Joel Deschiffart, who is from Nanaimo, finished in 21st place in the time of 31:03.4.

“Heading in I knew it was going to be interesting with such a strong field,” Shared Proudfoot.” Having top Canadians from the 1500-metre event to the marathon, left a number of possible race tactics from a bunch of talented guys. I just tried to stay comfortable for the first 7.5K and depended on my 1500-metre legs for a big last push.”

Proudfoot had a big year on the track and in cross-country during 2015. Running for the University of Guelph, he won the 2014 Canadian Interuniversity Sport (CIS) Cross Country Championships. He then ran a series of personal bests on the track including a 1500m performance of 3:39.16 at the Victoria Track Classic in June, a month later he ran a 5,000m best of 13:29.32 in Heusden-Zolder, Belgium. The following week he set another best in the 3,000m event in a race in Dublin, finishing in the time of 7:49.64.

Asked how the national cross country championships race played out he told Athletics Illustrated, “I knew Chuckie (Charles Philibert-Thiboutot) was feeling good as we ran together in the pack most of the race and he looked cozy, so when he went to the front I knew he wasn’t looking back. I just tried to keep contact with him and leave a gear or two for the final 400m.”

Proudfoot is just another, in a long line of talented and well-trained athletes to surface from the University of Guelph and Speed River Track and Field Club. “I’m super excited I was able to open up a post-collegiate career so well after missing a number of national cross champs as I was focussing on CIS.”

Guelph was well represented as six of the top-39 finishers were representing the Speed River Track and Field Club, including Canadian marathon legend Reid Coolsaet who finished fifth and exactly 10 seconds behind Proudfoot. There was also Taylor Milne, who is an Olympian in the 1500m event and a world championships competitor in the 3,000m steeplechase. He finished in the time of 30:43.8 for 13th position.

“Hopefully there’s more success to come on this road to Rio,” shared Proudfoot.