I am addressing the council about the rezoning and changes to Victoria High School track at Memorial Stadium. Your worship Mayor Helps and Council, my name is Hands de Geode, I am a proud resident of Victoria a city I emigrated to with my family from the Netherlands in 1957.

Over the nearly seven decades since, my life has been intertwined with the City of Victoria a community where I forged life-long friendships, nourished my mind during my time in education and pushed myself physically through high-calibre sports, built successful businesses, and most importantly raised a good family.

As some of you may know, athletics played a huge role in my life and defining my life and continues to do so today, especially in the world of rugby, where I have carved out a little piece of global recognition for the de Geode family name.

Like many, I began my athletic journey in high school beginning with playing soccer at Central Junior High School. It was when I attended Victoria High School that I found my true passion rugby. I was under the guidance of legendary Vic High Coach Tillman Briggs, who also had a tenure as Canada’s national rugby coach that my career in rugby took flight. My fellow Vic High Teammates and in fact the entire school body took great pride in our on-field successes adding to the Vic High lore that the school built up for nearly a centure. My proudest moment came when I was leading the team to the Howard Russell Cup in 1971.

I can tell you today that a major factor that led to our success was that we were and felt supported in every way by the school. We had the best coach in the land, proper training facilities and a standard-sized rugby pitch in which to play and compete. I went on to play for the James Bay Athletics Association of which I am still a member, BC rep side for provincial competitions and to Cardiff, Wales. My proudest achievement was play on Canada’s national team at the beginning of 1974, captaining the squad to the first-ever Rugby World Cup in New Zealand in 1987.

Today, me and my wife Stephanie a former Canada rugby team captain are very proud of our children who have picked up the mantle and all three played the spor. My son Ty has represented this country in both 7s and 15s, my daughter Sophie is currently on the national women’s team while still Completing her fourth-year studies at Queen’s.

The importance of athletics forming well-rounded citizens, but also contributed positive society. It is indisputable, I have lived it and I have seen it. That is why I believe all children should be given equal access to the resources that they need to achieve on and off the field.

As someone that has taken pride in and continue to build my life here in Victoria, I have also seen how Vic High and the Memorial Stadium have been left to deteriorate, not long after I had graduated in ’71.

It is difficult to image how any other person can feel valued and inspired to achieve at a school that is seemingly being left behind. Left behind by those that have the power to provide the level of support and care and the resources that from my perspective any other schools in Greater Victoria take for granted.

Just this week we hear that the member of Oak Bay raised more money from supporters and the City of Oak Bay [the school] received hundreds of thousands of dollars for a new track. This after receiving millions for a university like sport and art facilities just a few years ago and of course Spectrum School in Saanich is going through a similar process. Meanwhile, we hear that Vic High might not receive the same consideration instead having to settle for a two-lane walking track; that’s ridiculous and beach volleyball courts. A school that cannot accommodate rugby or football, how can this be?

I understand that many factors come into play in any decision that affects schools and students. My personal experience proves out that investing in young people in this critical juncture in their formation can set them on that journey of endless possibilities and opportunity.

I urge you as leaders to consider all the decision you make especially those that impact current and future Victoria High School students, ensuring that fairness and equality that’s the choices you make.

Just a little aside: In 1971 at the BC Track Championships, we had a 4 x 880-yard mixed relay medley. Each team had two girls and two boys. Wendy Thompson was one of girls and a girl name Susan, I cannot remember her last name, was the other girl. There was myself and Ron Weicker. We ran the relay and won the BC Championships and we set the provincial record that still stands today. All the training we did took place on that track at Vic High Memorial Stadium.

A walk-through of the issue with Esther Callo on video:

Podcast: Conversation with Ulla Hansen and Lori Chestnut about the 2020 Pan Am Cross Country Cup 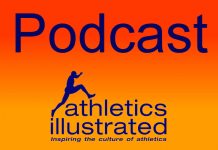