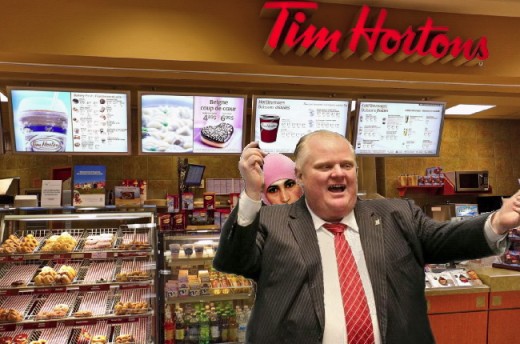 A’ishah Habeeb Jabbar Ishmael, a rejected black widow terrorist that is well-known to North American authorities as a repeated failed suicide bomber was thwarted again. This time she was stopped in her attempt to blow up Toronto, Ontario mayor Rob Ford while he danced and cavorted to Jamaican beats 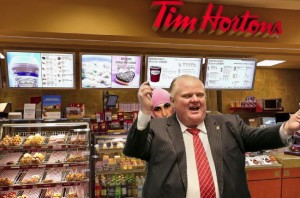 at a fast food restaurant in downtown Toronto, Sunday night.

“Ishmael was armed with enough explosives that if detonated would have taken out the entire city block,” according to a member of the RCMP bomb squad that was flown in by helicopter to defuse the explosives. Ishmael was quoting from the Quran during the melee. The explosives were secured to her torso by duct tape. Ford was so intoxicated that he was not aware that Ishmael attached herself to his backside.

This was Ishmael’s 19th attempt to commit suicide in the name of Allah. As she was being escorted away from the scene to a waiting SUV she was heard to be crying out, “الله لا يريد لي” or “Allah doesn’t want me.”

Before the RCMP bomb squad arrived, Ontario Provincial Police – who were on break at the restaurant at the time – surrounded Ford, after they were alerted of the situation by a concerned runner, passing by. Upon seeing the officers, Ford immediately assumed that a party was on and attempted to engage Officer Natasha Wilson, a corporal with the force, in The Bogle Dance. Ford was quickly tazered, tackled, video’d and sedated. According to witnesses the sedation process was the most intense and drawn out part of the take-down. “It was amazing, eh, they just kept injecting him with tranquilizers and he just kept singing One Love by Bob Marley, right there on the floor,” said one witness who did not want to be identified as Randy Oglestein.

Of Ishmael’s previous failed attempts to blow up buildings, the latest happened in December 2013, three days after she was released for the 18th time on her own recognizance from the Penn State Correctional Centre’s, George W. Bush facility. She was found attempting to drive an Econoline E-Series van loaded with dynamite into the Rockerfeller state library in lower Manhattan. Her winter driving skills were so poor that she simply slid around on the ice until the rental van ran out of gas. “She seemed very agitated when we confronted her in the van,” said detective Dan Wilson of the New York State Police.

Ishmael will receive counselling services and medical assistance while awaiting extradition for the next 10 years. She will remain under house arrest at an undisclosed Ontario provincial women’s half-way house. Ford was not injured during the incident and will continue with his mayoral duties.