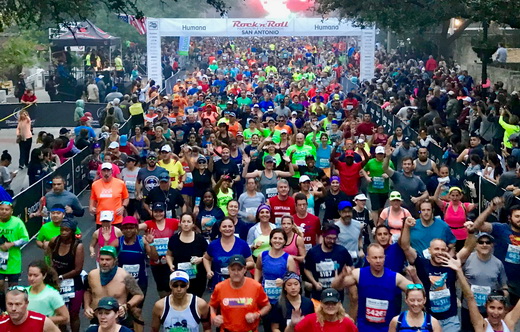 One of the most scenic cities in the Lone Star State played host to the 10th year running of the Humana Rock ‘n’ Roll San Antonio Marathon & ½ Marathon on Sunday. Not surprisingly, the 13.1-mile and the 26.2-mile events proved to be exciting races along San Antonio’s historic streets.

Both the men’s and women’s half marathons were displays of some of the fastest runners in the world. Kenya’s Stanley Biwottt prevailed in the men’s division, clocking one hour, five minutes, and 27 seconds. Biwottt has an incredible running resume, having won the New York City Marathon two years ago and has also won the Rock ‘n’ Roll Philadelphia Half Marathon twice. Though Biwottt was the clear front-runner in San Antonio, his race on Sunday was not a cakewalk. Mexican Olympian Daniel Vargas was just 14 seconds behind the 31-year-old Kenyan champ (1:05:41). Third place was awarded to last year’s winner, Mark Pinales (1:09:01).

Biwottt, who went out fast at the start, admitted after the race, that he was testing his speed on the streets of San Antonio. “This race was very tough,” he said. “The weather was humid, but I was happy because I felt comfortable.”

Biwott, who has a half-marathon PR much faster than his performance on Sunday, said that his win on Sunday was a comeback for him after a nagging hamstring injury that had sidelined him from competition for a full year. “I was not worried today, but the race was a test for me and I’m happy with how it went,” he said.

The women’s half marathon also featured a win by a superstar with two-time American Olympian Desiree Linden coming across the finish line in an impressive 1:12:44. Linden’s win was substantial—over three minutes ahead of second-place finisher, Sarah Crouch (1:16:30). The final podium slot in the half marathon went to Lauren Stroud (1:20:36).

“I got out of it what I needed to,” said Linden afterward. “I ran conservatively at the start and then really sped up. There were a couple of guys that I was able to run with. It was fun.” Linden said her goal on Sunday was to race something longer than the 10Ks and 5Ks that she had been training for. “I wanted to work on my strength. This race fit in well.” Linden said she will be running a marathon in the spring. “This time in December is great to run. It’s the last Rock ‘n’ Roll race of the year and they always put on a great race with the fun atmosphere. I loved the course and love the year. I hear it’s a great place to drink beer and celebrate and I’m all about that.”

The marathon was held in conjunction with the half on Sunday.

Erik Burciaga was the first runner to cross the finish line in 2:42:00. “I had a goal to run consistent,” he said. “I faltered at mile 21, but overall it was a good run. Every step from mile 18 and beyond, I felt like I was going to get passed. I tried to look forward, but every chance that I had to turn, I got a peek and saw I was still leading.”

Burciaga admitted that being a runner means there will always be pain, but he said his preserving personality allowed him to stay motived. “I knew I could stay within myself,” he said. Burciaga didn’t think he would win Sunday’s marathon. “It was my first time leading. I went in with a plan to stick to a pace as long as I could. I just kept going.”

Caroline Veltri of New Jersey won the women’s division, clocking 2:56:09. “This race meant a lot to me,” an emotional Veltri said after her finish. “My grandpa died a year ago and two years ago my other grandpa passed away, so I ran this race for them.” Veltri pointed out that one of her grandfathers shared her last name, Veltri, and that name means greyhound in Italian. “Today, I wanted to live up to my last name. I felt like they were watching down on me. I felt God’s grace. I had to dig deep when I wasn’t feeling good.” Veltri said she loves San Antonio. “It’s a great race. I really enjoyed the course and the crowds.”

72-year-old, Larry Macon finished his 2,000th marathon with his own finish tape and a confetti celebration. The local San Antonio attorney did not start running until he was 52 and finished in a time of

“The people of San Antonio are unbelievable,” said Macon. “I hope my head gets back to normal size soon.  The support out there was encouraging and made the time fly.”

Women’s running pioneer, Kathrine Switzer who was the first woman to complete the Boston Marathon starting the fight to overcome gender stereotypes, ran in the half marathon. Her foundation, 261 Fearless – named after the original bib number she ran with — supports women in the sport of running and is one of the featured charities of the weekend. Through her partnership with Humana, the 70-year-old is now focused on inspiring seniors to achieve their best health and experience all life has to offer.