The World Anti-Doping Agency (WADA) recently found out that a newly developed muscle-building drug – invisible when using current doping test procedures – was made available to undercover German journalists, who were posing as athlete representatives.

As widely reported, WADA expressed outrage that a Russian scientist from a renowned Russian Academy of Sciences apparently provided a free sample – for the purpose of selling – the new potent and undetectable muscle-building drug to the journalists. WADA Director General David Howman said, “The substance has previously been trialled on animals only.” The drug was reported as a Mechano Growth Factor (MGF).

It is twice as effecttive as conventional MGF. MGF (IGF-1Ec) plays a special and unique role in muscle growth and repair, as it has the ability to cause damaged tissues to grow by activating muscle stem cells and increasing the response to a stimulus of protein synthesis, this unique quality rapidly improves recovery as well as muscle growth. Hajo Seppelt, who was one of the journalists, told Athletics Illustrated, “Biochemists told us, that it could be very effective for intensive muscle growth.” He also said, “It is a peptide hormone. The substance is classified as a prohibited substance in and out of competition in section S2 of the WADA Prohibited List. People should not mix it up with the “classic” MGF, which is available for many years on the black market.” 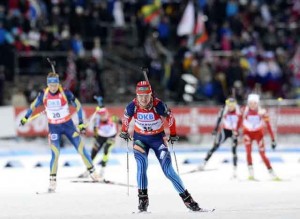 The outrage may have been felt because the International Olympic Committee (IOC) collaborated with WADA and Sochi 2014 officials to carry out an unprecedented 2,453 tests to ensure that Olympic athletes are not using steroids to enhance their performances. For detectable drugs the newly increased testing has apparently worked to catch at least two Russian biathletes, including Irini Starykh who was asked to leave the games after she tested positive for steroid use. As of Friday night, Sochi organizers had conducted 1,799 tests, of the planned 2,453.

When asked if he believes Sochi Winter Olympic athletes are using this undetectable drug, Seppelt, who is also a doping expert, said, “You never know. There is no evidence for that, but it would not surprise me. It wouldn’t be the first time that substances, which are still in clinical trials and not approved, are misused by athletes.”

Asked how he was provided the opportunity to purchase the illegal substance Seppelt said, “An informant from Austria had sent us an email in 2010, claiming that this Russian had declared in a scientific presentation that he could optimize a substance for doping purposes. This was Full Size MGF. The scientist allegedly offered his colleagues to use the substance, this was unbelievable for us.”

A few weeks before Sochi the journalists decided to approach the scientist. They wanted to know if he would also offer the substance to competitors of the Sochi Games. They pretended to be athlete advisors and contacted him in Moscow. When asked of his identity, Seppelt said, “we are not prosecutors, but journalists; we wanted to show how easy it is to get doping substances illegally from people in the scientific community. But we don’t want to blame individuals in a country like Russia even if their behaviour is unacceptable. The risk of a rogue media campaign or very harsh punishment in Russia which might bring people in serious personal danger is too high.”

Apparently the full-size MGF has been produced in very small quantities, which explains the high dollar value as the journalists were offered the drug at the rate of $100.00 for 100 milligrams.

“The scientist had given us before in Moscow a 1 mg test sample for free, because we told him that we have to check in a lab if the substance is really that one which he was offering us to buy. The WADA accredited laboratory in Cologne later analyzed the substance and confirmed the authenticity,” said Seppelt.