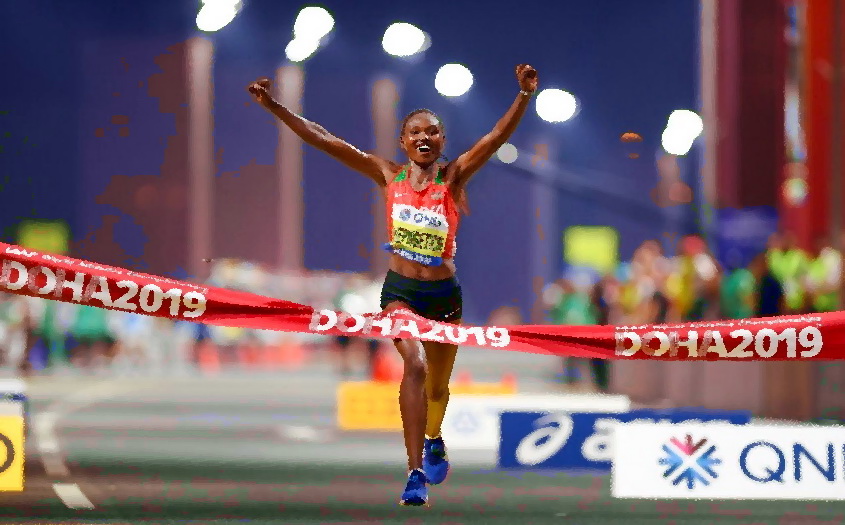 Congratulations Ruth Chepngetich for winning gold for Kenya in the marathon. #Doha19 pic.twitter.com/IQzdHdAlCy

She took nearly half a minute off Ethiopian Ababel Yeshaneh‘s record of 1:04:31, from Feb. 2020 at Ras Al Khaimah last year. Ethiopian Yalemzerf Yehualaw finished second in 64:40 with Kenya’s Hellen Obiri finished third in the time of 64:51. It was Obiri’s debut in the distance. She is the current Kenyan record holder in the 1500m, 3000m, and 5000m distances.

Kibiwott Kandie, the current world record holder in the distance won in the time of 59:35, two minutes slower than his record of 57:32, set in Valencia on Dec. 6, 2020. Former world record holder Geoffrey Kamworor finished second in 59:38, with Roncer Kipkorir finishing third.

The Scot, age 29, recorded the time of 14-minutes and 41 seconds (14:41) on Saturday. Apparently, the performance may be recognised as the world record, however, the course will need to be re-measured for certification.

Kenya’s Joyciline Jepkosgei has run faster at 14:32, which she ran on the way to finishing a 10K in Prague in 2017. Friday, Kenyan Beatrice Chepkoech’s run of 14:43 from Monaco in Feb., this year was ratified just on Friday by World Athletics

However, 5K road races have been ratified as world records according to World Athletics since January 2018. Her time may be ratified, however, due to the disparity between her previous personal best of 15:42, the Barrowford course will need to be re-measured. Allegedly, the start area may have been moved from its original placement.

Potter is a triathlete who was seeking a spot on the Tokyo Olympic team. She missed.

Yesterday @beth_potter broke @paulajradcliffe‘s record for the fastest 5k run by a British woman, with a time of 14:41 🏃‍♀️💨⏱