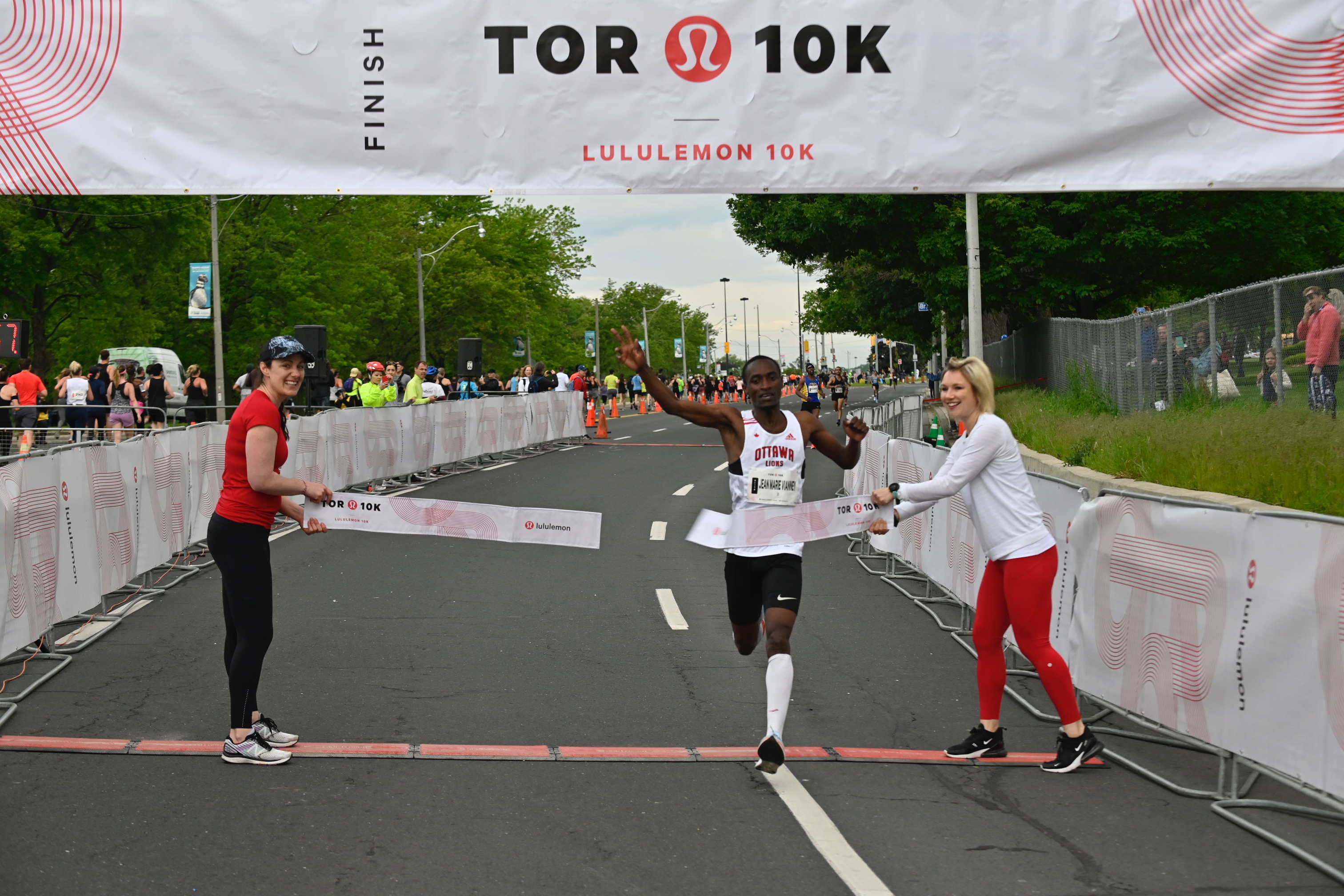 Surprises were abundant at the lululemon Toronto 10K today with a pair of refugees from
Rwanda emerging victorious in the men’s and women’s divisions. Both were making their
debuts in the Canada Running Series. Both are now living in Ottawa.

First across the line was 30-year-old Jean Marie Vianney, who finished in a time of 29:58. Bonsa Gonfa, an Ethiopian born athlete now representing Toronto Olympic Club, following him in second. He finished in 30:05, three seconds ahead of Phil Parrot-Migas of London, Ontario.

“The start was complicated for me because my body was not good,” Vianney said afterward.

“I didn’t feel good. But after 1K I tried to pick up the pace. The course was nice with some hills but it’s not bad. Definitely nice.”

Bonsa was also pleased with his race and was surprised by the performance of the winner.
“After 7km, the guy, he pushed the speed and after that, I followed him,” he explained. “I tried to catch him but couldn’t. I tried for number one but I didn’t get it.”

His compatriot, Salome Nyirarukundo, crossed the finish line in 34:03 to win the women’s race. Vianney greeted her with a hug and a huge smile. Both have been in Canada less than a year, but long enough to gain respect for the Canadian winter. Each will claim $300 prize money. Much had been expected of Canadian marathon record holder Cam Levins, who had withdrawn from April’s London Marathon due to a knee injury. He was amongst the pack of seven that passed the halfway point in 15:08 and finished 5th in 30:21. He looked comfortable, as he had done when beating Jerome Drayton’s 43-year-old record with 2:09:25 at the Scotiabank Toronto Waterfront Marathon last October.

“I am healthy,” he said with a smile. “I felt fine the whole way it’s just that the fitness isn’t there yet. I wanted to win. I think everybody wants to do that. I am not disappointed, I am fine with it.” He continued, “I have been healthy for a few weeks. I knew I would be able to finish and just see where I am at.”

Having arrived in Toronto on the evening of the Toronto Raptors historic NBC championship
victory Levins, who is a huge Raptors fan, added with a laugh: “I have not had much sleep the last few nights with the Raptors celebration.” As shy and reserved as Vianney appeared, Nyirarukundo was eager to socialize with everyone around her hugging Rachel Hannah, who was the second woman across the line (34:30), and third place finisher Glady Tarus (of the Toronto Olympic Club).

Nyirarukundo had led the women’s field through the 5km mark with Hannah on her heels. They both had run at the Ottawa Marathon May 26 with the Rwandan finishing 4th there in 2:30:44. Today she praised everyone who has helped her.

“The race was very good,” she began. “The weather was good and most of the people when I was running they told me ‘go, go, go!’ and then my body felt strong. Even some competitor number two she is strong and I want to wish her congratulations because she ran Ottawa marathon too. It was a perfect race.”

“I train every day. I train with Jean and Yves Sikubwabo helps. I have to talk about those guys. They try to motivate me, try to support me, every day. So I thank Yves. I am in his debt. I am so happy.”

Sikubwabo, who came to Canada as a Rwandan refugee himself, represented Canada at the
2019 IAAF World Cross Country Championships and finished 6th in the men’s race in 30:36.
Afterwards, he proudly stood with Nyirarkukundo and Vianney and called them ‘my team.’
Later she offered an insight into how life has changed for her in Canada.

“It is not easy. It is difficult,” she explained. “For me it was the first time to see winter. It was very hard. In March I was in Hamilton for the Around the Bay 30km race. It was very cold. Everything is new for me, so I have to fight every day to show the people what I have, show them my talent. It is my dream to run for Canada.”

Rachel Hannah also appears to have recovered well from her Ottawa Marathon performance
and was all smiles following the race. “I am quite happy with it given the turnaround after Ottawa,” she offered. “I actually felt pretty fresh. I had quite a bit left at the end but that’s the marathoner in me.”

The weather has been so unpredictable across southern Ontario this spring but thankfully
settled in time for the race. Earlier in the week part of the course along the Lakeshore Boulevard had been flooded as heavy rains and an unusually high level in Lake Ontario combined to cause organizers concern. But the 10,000 runners, who helped sell out the race in 23 hours, toed the line with a slight wind and a comfortable 16C temperature.
Together they raised more than $31,500 for The 519 (a non-profit organization advocating for the inclusion of Toronto’s LBGTQ community).

The Canada Running Series now moves to the west coast to continue next weekend at the
Scotiabank Vancouver Half Marathon and 5K.