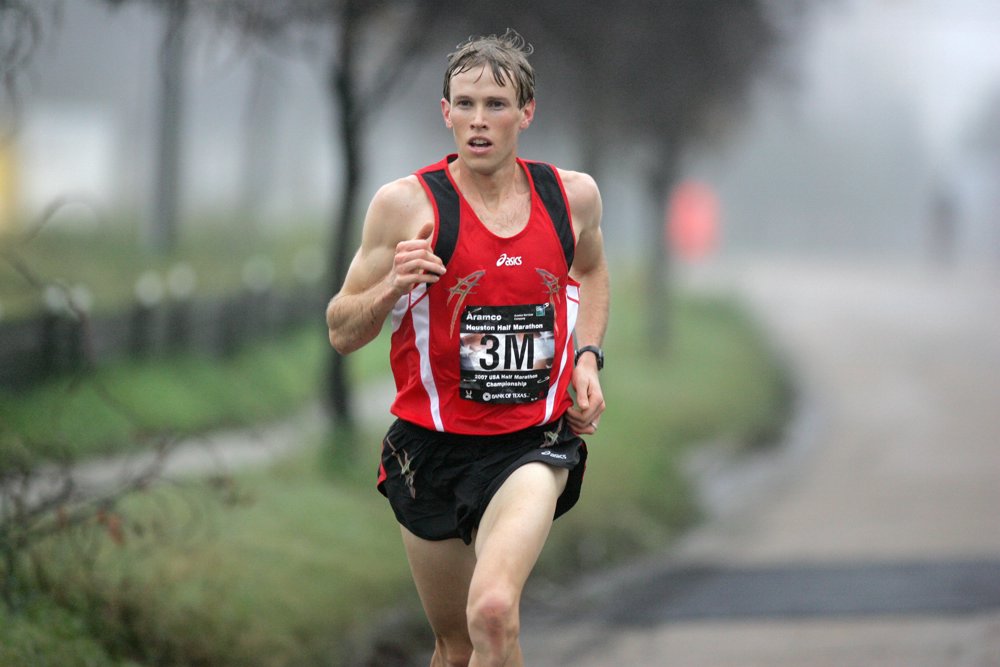 Ryan Hall, America’s fastest marathon runner will be racing the 2014 B.A.A. Boston Marathon, Monday, April 21st feeling fit and healthy, for a change. Hall told Athletics Illustrated, “I am really excited to be heading to Boston totally healthy and I am thrilled to race having put in a full 12 weeks of marathon training, which is the typical length of my buildup.”

Hall owns a marathon personal best of 2:04:58, which he achieved at the 2011 edition of the race. Hall’s time is faster than the official American record that is held by Khalid Kannouchi, who ran as fast as 2:05:38 during the 2002 London Marathon. Boston is considered an aided course according to the International Association of Athletics Federations (IAAF), as it offers up a point-to-point course and a net drop greater than the allowable amount – a total decent from start to finish of 137 metres or 450 feet. Hall’s officially recognized best is 2:06:17, which was achieved during the 2008 Virgin London Marathon, where he finished fifth overall behind Kenyans Martin Lel who won in 2:05:15 and Sammy Wanjiru with his 2:05:24, Abderrahim Goumri from Morocco in 2:05:30 and Kenyan, Emmanuel Mutai just two seconds ahead in 2:06:15.

He was the very first American runner to break the 60-minute barrier for the half-marathon distance. His half-marathon personal best time is 59:43, which he achieved at the Aramco Houston marathon in January of 2007. In comparison, two weeks ago during the Paris Marathon legendary Ethiopian athlete Kenenisa Bekele debuted in the distance and finished in 2:05:03, to set a new course record. Bekele has yet to run the half-marathon distance under the 60-minute barrier. Like Hall, he recently returned to competition after battling injuries and a few sub-par performances.

Hall has spent time training at altitude in Ethiopia, Kenya and various places in the US over the past three years. For part of 2013, he was trained by the legendary Italian coach Renato Canova, who is most notable for his work with many of the very best East African athletes. Currently, Canova is in China working with their top distance runners. Hall has also been coached early on by his father, then by Vin Lanana at Stanford University before moving to Mammoth Lakes, California to be guided by Terrence Mahon who headed the Mammoth Track Club. Mahon went on to coach in Great Britain and is now a B.A.A. Boston Running Club coach, heading a high-performance group. The Boston Athletics Association puts on the Boston marathon.  On Monday we will find out if Hall’s return to self-driven and faith-based coaching puts him back on top of American distance running.

He recently returned from Ethiopia in good condition and injury-free, “Having spent the last month in Ethiopia training at 9,000 feet (2743m) has provided me with a huge boost in fitness, so I am excited to come down to sea level and see how I perform.,” said the 31-year-old.

“With that said, it just feel great to be back in a major marathon and Boston has always been near to my heart and this year will be even more special in wake of last year’s events,” shared Hall. Asked if he is willing to predict a finish time for Monday, he said, “Anytime I race I always go in with an open mind, not with a set time planned, so I don’t wish to predict a result.  I will say I have never done so many long, quality tempo runs, so I feel prepared to run fast if the conditions and competitors are willing to push to make that happen.”