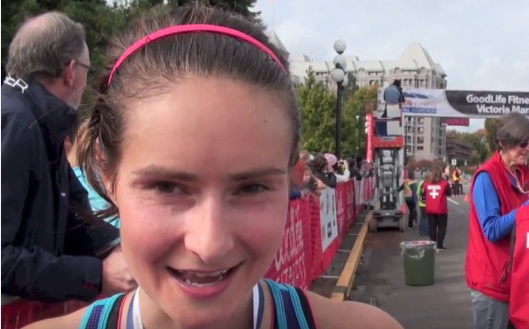 There were over 8,000 competitors in the event.

The winners of the marathon were Daniel Kipkoech of Kenya and Sabrina Wilkie of Vancouver. Kipkoech led the entire way and finished eight minutes and 27 seconds ahead of second place finisher Bryan Andrews of Calgary. Andrews ran a personal best of 2:29:00, which is approximately a 45-second improvement over his previous best. Kipkoech cruised in at 2:20:33. James Desalvo finished third in the time of 2:35:05, he was also the first master (40-plus).

Kipkoech is a three-time winner of the event. He won in 2014 and 2015, he, along with Steve Osadiuk and Kelvin Broad are the only other three-consecutive time winners of Victoria.

Asked about his performance he said, “I slowed down a little bit because there was no one to share the lead with, if there was someone else up front with me, we would have run 2:15 or faster.”

Fellow Kenyan Lamech Mokono, who owns the current course record of 2:13:42, was delayed flying out of Nairobi and was not able to race.

GoodLife was Wilkie’s debut at the distance. She was up against Portland, Oregon’s Eva Vail, wife of 2:10:57 marathon runner Ryan Vail. Wilkie stayed behind her for approximately 30-kilometres.

“I think it was about 30K where I passed her,” said the former UBC runner. “I ran my own race, but I know she wasn’t too far ahead for the whole length before I passed her; it was good.”

Wilkie trains with the Vancouver area high performance group, BC Endurance Project under the direction of Coach Richard Lee.

In the half-marathon Kenyan Paul Kimugul prevailed over Vancouver’s Rob Watson. They finished in the time of 1:07:19 and 1:09:55, respectively. The third place finisher was Jim Finlayson who doubled down as the masters champion, crossing the line in the time of 1:11:01.

“It wasn’t exactly what I was looking for. I was hoping to run under 1:07:00 as I would like to run under 2:20:00 at the New York Marathon next month,” shared Watson, who retired from competitive international running, but keeps fit coaching others and training.

“I have three weeks to put in some good hard work before New York,” he added.

In the women’s half-marathon event Kenyan Jane Murage finished behind only eight men and recorded the time of 1:17:25. Asked about her time (she is typically capable of 1:13:00) she said, “I didn’t want to work too hard in this one if I didn’t have to, because in two weeks I would like to race the Rock ‘n Roll Half Marathon. I would like to be ready for that one too.”

Murage is a four-time winner of the TC10K that takes place in Victoria in April each year. The event attracts approximately 10,000 runners each year.

Maria Zambrano finished second, but also as first master and first in the 45-49 age-category in the time of 1:18:45. The third place finisher was Christina Overback Crawford, who finished in 1:20:13.

In the 8K Calgary’s Trevor Hofbauer crossed the line first in the time of 24:36. Brandan Laan from London, Ontario finished in 25:16, he virtually tied with Vancouver’s Mark Wilkie, husband of the marathon winner Sabrina Wilkie. They were credited with the same time, but Laan did finish slightly ahead.

Hofbauer teamed up with Lanni Marchant, Canada’s marathon record holder (2:28:00) to run in the NACAC 10K Road Championships earlier this year. The event was run in conjunction with the World’s Best 10K in San Juan, Puerto Rico. Hofbauer and Marchant were the fastest duo.

Deacon also competed in the IAAF World Track and Field Championships three times and has run 2:20:00 or faster over 20 times in the marathon event. He has organized a Youth high performance group out of Victoria and held the second annual Youth Endurance Conference with guest speakers like John Halverson, Cameron Levins, Chris Winter and Lynn Kanuka, amongst others. They capped off their weekend with the 8K race as a group.

From the high performance group is Liam Stanley who won a silver medal in the 2016 Rio Paralympic Games.

Lindsay Carson of Whitehorse, Yukon is now a three-peat champion of the 8K. She won today’s edition in the time of 27:35. When asked about her time, she seemed okay with it, “Not bad, but I ran in it 27:15 two years ago,” she said.

Justin Stecko finished in second place, while Lindsey Drake finished third. They were credited with the times of 29:32 and 29:44 respectively. The first female master was America Aznar, she finished in 32:59.

Below is a selection of photos from the 2016 GoodLife Fitness Victoria Marathon. Photo credit for all images: Christopher Kelsall.