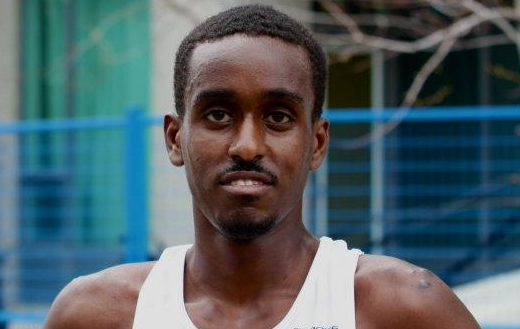 Toronto, Ontario’s Sami Jibril is one of Canada’s, up-and-coming distance runners. He started out competing in modest fashion during high school and was a relatively unknown entity on the Canadian racing scene until 2013, where he pulled off a win at the Harry’s Spring Run Off 8K, finishing in the time of 24:24, less than a second ahead of Josephat Ongeri of Hamilton, Ontario.

During 2014 and early in the 2015 season he has run at least eight new personal best times:

Christopher Kelsall: At what age did you start running?

Sami Jibril: My final year at Heart Lake Secondary in Brampton, Ontario. At 17 years of age I joined the school cross country and track team. I showed no promising talent in my first few years and finished 193rd out of 230 finishers at OFSAA Cross Country Championships and second to last at the South Regional for Track in the 3,000m in 10:15.

CK: Who motivated you to take up running?

SJ: My phys-ed teachers Mr. Smith, Mr. North and Mr. Kalendra at Heart Lake Secondary encouraged me to join the cross-country team after noticing I would run the Beep test (running test) consistently above average levels on a weekly basis. There at Heart Lake we had such great success with five out of six cross country teams in the midget, juniors and seniors level winning ROPSAA and running at OFSAA in Thunder Bay, Ontario in 2006.

Although I found myself out of my league at OFSAA cross country, I had a great experience. From then on I wanted to become a better runner with so many talented guys running so well like Matt Hughes, Matt Leeder, Mohammed Ahmed and Andrew Heaney. My former and now current teammate after several years later Justin Duncan, a very talented middle-distance runner introduced me to the Mississauga Track and Field club where I began running.

CK: Did you play other sports growing up in Toronto?

SJ: Growing up I was not involved in any organized sports.

CK: You ran the historic Around the Bay 30K on Sunday, March 29th, finishing fourth. This apparently was your longest race to date. Can you take me through it?

decided ATB 30k would help me make the transition to the marathon later this year. I came into this race very fit from my winter training in Toronto even though my weekly mileage was relatively low.

CK: What were your expectations going in?

SJ: My expectation was to race well over 30K and to compete with the leaders. The leaders have accomplished times of 60-minutes and 62 in the half and 2:10 marathon times. Working together the leaders Paul (Kimugul) and Daniel (Kipkeoch) set out at a blazing pace of sub-1:30 early, so I set out relatively ambitious as well and died to success at the end of the race in hopes of coming back on the leader. Towards the last 10k of the course it became challenging with a strong head wind and rolling hills. Overall I felt good after the 30k and gained some valuable experience moving forwards.

CK: Your 1:35:47 appears to be about 67-minute pace, also according to the IAAF Scoring tables is equal almost to the second of your Niagara Falls 64:57 – do you feel your race at ATB with the hills and wind was a better performance?

SJ: My Niagara Half Marathon performance was a better performance because I ran an even paced race, my experience always tells me even pacing is always better. Sometimes race times do not tell the whole story. For my 1:35:47 30k, I ran 65 minutes for the half marathon split and took some risk early on, which meant I could have ran faster.

CK: How much time would you have shaved off the 30k had you ran it better tactically?

SJ: I am not sure how much. The race is done and in the past. I am sure I will get a chance to run this distance in the future as a more experienced runner.

Ed. Note: Around the Bay 30K course was changed due to construction and for the 2015 running is deemed inaccurate.

CK: Will you be moving to do more the half-marathons and up to the marathon now that you raced the 30K?

SJ: Well last year I ran four half marathons and paced a marathon for our elite Canadian women at STWM. So I believed I have already made the move to those distances as a main focus.

CK: What does a typical in-season and off season training week look like for you?

SJ: A typical training week consist of running everyday sometime twice-a-day, one long run and two workouts of 10K to 15K each when I am in the middle of my serious training. In the early part of fitness building it is toned down to tempo running at a slower pace offset by shorter rests. Once a week I get a strength training session and recovery treatment session at The Runners Academy clinic and a Stride Day focus. All of this is done around my full-time work schedule at the Toronto Transit Commission (TTC). My profession is very important to me as well.

CK: What do you do with the commission?

SJ: I have been working for the TTC (Toronto Transportation Commission) for four years now; I currently work as a vehicle mechanic on the TTC Streetcars. It involves replacing faulty mechanical components of the vehicle such as brakes, motors, compressor and many more components. It is such a rewarding job to be a part of the operation of the streetcars in such a rapidly growing city, and has been part of Toronto’s culture and history. Also, hopefully, it will lead me to an apprenticeship in the future.

CK: I understand that you often work a very late shift. Did it take a while to adjust your running schedule with your work schedule?

SJ: I have worked every shift possible including the night shift. I have been working full-time for the last nine years and have been running about the same. In this time I have developed good time management skills to balance the two areas that I am dedicated to. There was a bit of a learning curve at first, but now I don’t find it difficult to manage running and working as it has just become routine.

CK: How was winter training this year? I understand it was a little cooler and snowier this year.

SJ: I thought it was a good winter overall, I only had to run on a treadmill twice this winter on snow storm days. Here in Toronto’s Lakeshore where I normally do all my easy mileage and Long runs we have incredible snow and ice removal by the city workers every day when needed. I enjoyed the training challenge in those extreme cold days. Most of my workouts were done at York University indoor track focusing on speed for the 5,000m and 3,000m indoor races given my goal race is in the fall.

CK: What goals do you have for this spring and summer?

SJ: The spring I hope to be running many more road races and a few distance races in track. On my schedule I have Yonge Street 10K, Canadian 10,000m champs in London ON, Canadian 10K Championship, Ottawa 10K and Scotiabank Vancouver Half Marathon. This summer I plan to train harder than ever for my “unofficial” debut at the Canadian Marathon Championships, which is the Scotiabank Toronto Waterfront Marathon in October and to run a quality marathon, of course.