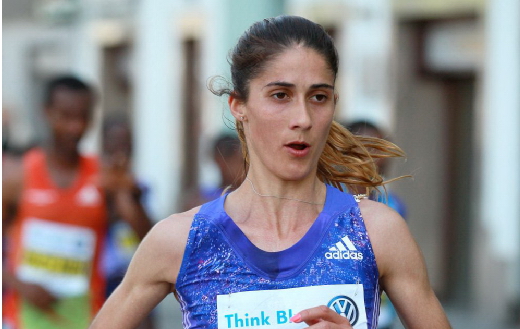 Third place in New York on her debut, runner-up in her second marathon in Prague on Sunday – if Sara Moreira carries on like this, she’ll win her next marathon. And that would be no surprise at all. The Portuguese runner showed at the Volkswagen Prague Marathon that she is one of Europe’s greatest hopes for the classic road racing distance. On Sunday she improved her personal best of 2:26:00 from New York last November by more than a minute to 2:24:49. That left Sara Moreira just 80 seconds short of the national marathon record achieved by Portugal’s legendary Rosa Mota. The 1988 Olympic Marathon champion ran 2:23:29 to finish third in Chicago in 1985.

“I never really thought I would run the marathon,” reflected Moreira. “I always saw myself as a track and cross country runner.” The 10,000 metres will continue to be the priority for the 29-year-old this year, where she plans to run the distance at the World Championships in Beijing this summer. She already has the qualifying time, having run a personal best of 31:12.93 at Huelva in Spain in April.

After her second impressive performance in the marathon, Sara Moreira remained convinced that her immediate future was on the track: “I don’t see myself as a marathon runner. In the short term I’ll be running track, cross country and shorter road races up to half marathon. “But that might change. If I could run a time similar to what I’ve done in Prague, I would prefer to run the marathon at the Olympic Games in Rio next year,” explained the 2013 European Indoor champion over 3,000m.

The fact that she ran a marathon at all is down to the New York organisers inviting her. After her strong debut in the Big Apple last November, the London Marathon made her an offer. “I couldn’t turn that down,” said Moreira, but she then suffered an injury after the 10,000m race in Huelva and didn’t recover in time to run London. That’s how she came to run in Prague at short notice.

Her training, supervised by husband and coach Pedro Ribeiro, is now geared more to the marathon than 10,000m. There are no plans for altitude training and she prefers to prepare at home just north of Porto, so they can look after Guillermo, their eighteen-month-old son.

In response to the question why Portugal has consistently produced women runners of high standard, Moreira says: “We have a lot of strong competition nationally and that produces good performances.” Her main inspiration has been Fernanda Ribeiro, the 1996 Olympic 10,000m champion. Rosa Mota’s great performances were before her time since Moreira was born three days before the Olympic champion broke the Portuguese record in 1985. But she has Mota’s time of 2:23:29 firmly in her sights. “I believe I can break the record one day.”