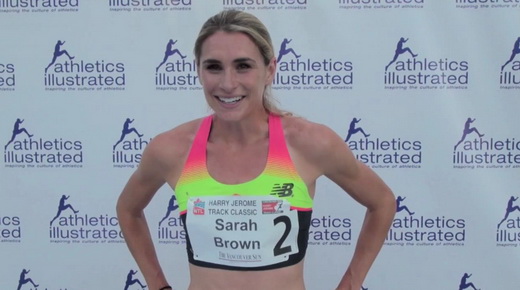 Sarah Brown (nee Bowman) is one of the fastest middle-distance runners in the US, specialising in the 1500-metre event. After more than a decade of competing at a high level she set new personal bests during the spring of 2015 in the 800-metre and 1500-metre distances.

She has competed three times in the IAAF World Track and Field Championships once each at  indoors, outdoors and juniors.

Brown and her husband Darren (also a 1500m runner), while planning Sarah’s year towards competing for a spot on the US team going to the 2016 Rio Olympic Games, got an unplanned but welcomed surprise with a new addition coming to the family. Due in March this year, Brown is not letting something like nine-months of pregnancy get in the way of those plans. She has been training and cross-training throughout and expects to race in the 2016 Olympic Trials this summer.

Christopher Kelsall: You grew up in Warrenton, VA and are back there now. Is it a good community in terms of sport?

Sarah Brown: I love the Warrenton and Northern Virginia area. I have great community support here and both Darren and I have been reminded how nice that is since we have moved back.

CK: What sports did you play growing up there?

SB: I played soccer from age six to 16. I also was a cheerleader in middle school. My first track race was in a soccer jersey and cheerleading shoes.

CK: How did that first race go?

SB: I took the lead from the beginning and won. That was always my early race-years tactics.

CK: You’ve matured since. Speaking of maturing, you are expecting your first baby in a few weeks. How has the pregnancy gone so far? Have you had a chance to run and cross-train throughout?

SB: Training while pregnant has been full of many surprises and hurdles. However, anytime we’ve come up upon a bump in the road, Darren and I have always been able to handle it and adjust accordingly.

Darren put a lot of time into researching and reaching out to the right resources in order to be able to come up with a proper training plan for me. We’ve really found out that it can be a day by day process to see how I am feeling etc. I had a pretty big hurdle from week 20-24 where I had to resort to only cross-training and ElliptiGo workouts due to a muscle spasm in my hip and back. We have been able to come out the other side of that though and things have really stabilized for me. Throughout the entire pregnancy thus far, I’ve been able to workout in some form, which I am very grateful for.

CK: Any odd things pop up such as high resting heart rate or the feeling of lactic acid entering the muscles early? I would assume much of your work is well under the anaerobic threshold?

SB: We don’t train solely off heartrate, not even recommended by our doctor. I keep my HR under 175 bpm for intervals (everyone’s HR is so different that there is not “one HR” to generically place across the board). The most important thing is not building up lactic acid and keeping core body temperature down (I use a thermometer to double check but have never come close to overheating). We keep my interval work at threshold levels which is where we developed the 175bpm, because that is what is more appropriate for my body to be at threshold.

CK: Often the fathers will enjoy the pregnancy along with the expectant mothers, has Darren filled out over the past few months?

SB: No, Darren is still as fit as ever! He has been able to enjoy doing other non-running forms of activities such as biking and swimming.

CK: Does that mean he may train for triathlon after his athletics career?

SB: Actually yes, he plans to try his hand at some triathlons this spring.

CK: Graham Hood and Malindi Elmore are quite good at it after both having good middle-distance careers. I know your focus now is on Rio, but would you move to triathlon post-career?

SB: Darren thinks I need to try my hand at one before retiring but who knows! Right now, as long as I keep seeing improvement while running in circles ha-ha, I think I will stick with that.

CK: Apparently you will be going after the Olympic standard even though the window is very short for you – post childbirth; from today’s perspective is that still in the cards?

SB: I actually have the Olympic standard when speaking in terms of the time required. In order to earn a spot on the team, I need to place top three at the Olympic Trials in July and yes that is definitely still on my radar.

Ironically, my running workouts have actually improved over the last few weeks as my body has adjusted to the new weight and imbalances. I don’t take any day of training for granted but I’ve been in a really good routine, running four days a week and cross-training the days in between.

Our focus is to make the “running days” count by doing anywhere from 10-12 miles (16-20K). Two of the four days consist of workouts and the other two are made up of a medium long-run and a long-run. We’ve been able to keep the “core” running aspects and the other three days consist of ElliptiGO and swimming recovery days. I am really happy with how my body has been doing recently. It’s definitely uncomfortable to have a baby sitting on your bladder and kicking you in the ribs but it’s also a great mental training technique to be able focus on the task.

CK: You are going to feel so light afterwards. Perhaps there will be the neuro-muscular benefit of feeling light similar to running at elevation and coming down to breath sea level air!

SB: Hopefully! I’ll take what I can get!

CK: You had a fantastic season last spring running personal bests in both the 1500m and 800m distances, what do you attribute the great season to?

SB: Darren and I went into last season very focussed on staying healthy and running hard when it counted. We planned out my races and training strategically, which meant only running one indoor race and also incorporating an altitude trip in the early spring. Our approach really paid off and it’s always a positive to see improvement and be in my best shape especially as a veteran of the sport. Consistent improvement justifies our process.

CK: Will you focus on one distance straight off or test the 800m and 1500m to see which you perform better in? Which would you prefer to focus on?

CK: Which are the first meets that you are planning to enter after the baby arrives?

SB: I have no set schedule. The key is not putting any hard deadlines or expectations on myself. Until we can see how my body recovers and handles the training load, we can’t make any concrete plans.

CK: Securing a top three position at the trials will likely require what sort of time and do you find tactics at the trials similar to global championships?

SB: When racing, you have to be prepared for many different circumstances. However, at the US Olympic Trials, many athletes aren’t worried about time so much as place. I predict the race to be more strategic and come down to having a strong finish.

CK: With many athletes getting suspended for performance enhancing drugs, do you feel like there is now a more even playing field? Does WADA’s recent efforts provide you with a sense of optimism?

SB: Honestly, the extent of doping in our sport is overwhelming and disheartening. It’s refreshing to see that the cheaters are starting to get caught but the key word here is “starting”. Our sport is definitely a long way from “evening the playing field”. We need to be able to catch cheating athletes in more real time. To do this, we need to address the institution of doping and stop simply reacting to individual cases after they have affected our sport and harmed clean athletes. I dream of a day when clean sport is a given, not a question.

The American record for the 1500m is currently held by Shannon Rowbury at 3:56.29. The world record is held by Genzebe Dibaba of Ethiopia at 3:50.07