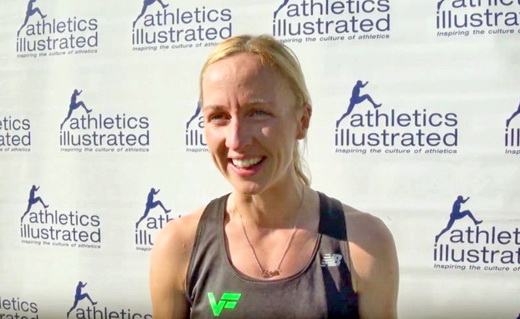 Scottish runner, Sarah Inglis, who has been working and training in Langley, BC (Greater Vancouver) for several years has signed with Puma Elite, based in North Carolina.

“So far it’s been great here. I settled into a new house, training group, and coaches! Making the most of the opportunity,” shared the 30-year-old marathon runner.

Inglis worked as a school teacher in Langley, while representing the Langley Mustangs Endurance Group under Coach Mark Bomba. Bomba, who previously coached at Trinity Western University (TWU) created a strong training group there, however, he took advantage of an opening at Queen’s University. Queen’s is located over 4500 kilometres to the east in Kingston, Ontario. Bomba was widely regarded as the best coach in Canada not at a university or Athletics Canada.

With Bomba’s move eastward, athletes sought new opportunities elsewhere, except Regan Yee, a 3000m steeplechase runner who followed Bomba to Kingston. Yee ran for Bomba at TWU and continued with the Mustangs. At one point she broke Geneviève Lalonde’s national 3000msc record which has since been taken back by Lalonde, a two-time Olympian.

On March 8, 2021, Let’s Run wrote that Puma wanted to get back into the running game. It had been nearly 20 years since they sponsored some of the best runners in the world including Usain Bolt.

Erin Longin, global director of running and training at Puma told Let’s Run, “A few years ago we really set our mission to become a well-known running brand. The Puma brand has been experiencing several years of growth and momentum. So we definitely felt the time was right to start to expand our brand presence to include both distance and road running.”

Asked about her teaching, she said, “I will be a full-time athlete while also working for Streamline Athletes, remotely.”

Her plan is to continue to pursue the marathon.

The Puma group is led by Alistair Cragg.

Cragg grew up in Johannesburg, South Africa. He competed for the University of Arkansas Razorbacks but went on to run for Ireland internationally. The now 41-year-old set Irish 5000m and 10,000m records and a European road record of 13:25 in the 5K. His best performance may have come in California at an Adidas meet where he clocked a 13:16.83 performance in 2009. Cragg earned a gold medal in the European Indoor Championships in 2005 in Madrid, Spain, clocking a 7:46.32 3000m performance.