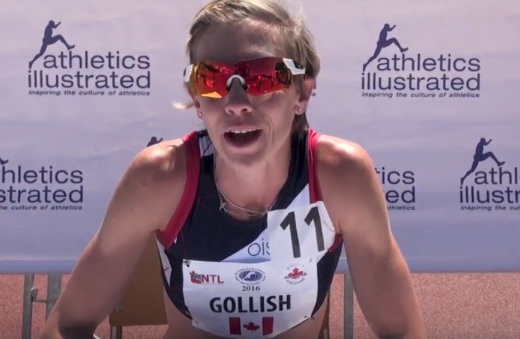 Sasha Gollish of Toronto, Ontario is one of Canada’s faster middle-distance runners, having won a bronze medal during the 2015 Toronto Pan American Games 1500-metre event. Her best time at the distance is 4:07.08.

Two years ago, she was a triathlete and duathlete, civil engineer and PhD candidate.

Sunday, December 6, she ran the San Antonio Rock ‘n Roll Half Marathon. She achieved a new personal best time of 1:12:35, which represents an astonishing nine-minute improvement. The only athlete to run faster on the day was American Kara Goucher, who broke the tape in 1:11:10. Gollish finished ahead of American Olympians Shalane Flanagan and Amy Cragg (Hastings), who crossed the line in third and fourth position with the identical time of 1:12:42.

Christopher Kelsall: Did you grow up with an active family?

Sasha Gollish: I grew up with a really active family. When I was small, my parents would play tennis with my sister and I. They taught us to alpine ski, and we went on lots of adventure holidays. Being active has always been a part of my household.

My mom really introduced me to running. My mom is the busiest person I know; she is a VP at a hospital, a practicing physician, on many boards and just awesome all around. She always made time for running and brought me to the inaugural breast cancer run. From there I was hooked.

And my dad, well he was a golfer as a kid. He also played hockey and really destroyed his knees. So while he couldn’t run I chased him all over the ski hill.

I really miss our alpine ski trips, but I know I’ll be back on the slopes at some point. And I’m really proud to see my parents still very active as they get older, they are so inspiring.

CK: Do you still get to play Ultimate, or is that on the backburner, while you focus on your running career?

SG: Ultimate, like alpine skiing, is on the backburner. I just do not have time for it right now, plus the risk of injury is too high. Every so often my boyfriend and I plus his kids have a mini-game of ultimate in the backyard. Plus the beach at his cottage is a great place to throw a disc around.

CK: You seemed to be a person who needs mental stimulation, yes? How does this affect your weekly mileage volume and daily routine? For example, do you need to spend one day a week doing something complete unrelated?

SG: I do enjoy mental stimulation. I have a really well thought out training plan that gives me breaks during the day.

I find I don’t need to nap all that often. I sleep really well at night and with the University of Toronto Track and Field Club we do two of our three workouts a week during the evening.

With these breaks during the day I read research articles, work on my writing (proposals, papers, etc), and get some work done. I am a voracious reader, everything from mystery, crime, teen fiction, sci-fi, the classics, and sometimes I like to spend the day (when not training) reading. I don’t ‘veg’ well; television has never really appealed to me. So I can sit still and let my legs recover, it’s just usually with a book or my computer.

CK: You have been going great guns recently with competing in the Canadian Cross Country Championships, dropping a nine-minute personal best in the half-marathon as well as medalling at the 2015 Toronto Pan American Games. Will running be your sole focus going-forward (as opposed to triathlon)?

SG: In the last year I have made running one of my priorities, in fact, it’s usually my top priority. But I also crave balance and stimulating my brain. My PhD in Engineering Education has really allowed me to balance both (thanks to an AWESOME supervisor) and keeping my mind active.

CK: Regarding balance, can you draw parallels between the singular focus of running (only) and the focus of achieving a PhD?

We live in an era where multi-tasking is the norm, and sometimes it’s great. But one is far more efficient when you engage in only one task. I have definitely become a better runner by cognitively engaging in practice and stopping my brain from manically running around. Sure I still have running ‘think’ time, we all love that, but when it matters I focus in on what I’m doing. I have learned to do that with my PhD, hanging out with friends, attacking whatever task is at hand.

There is a lot of talk about being ‘present’ these days. Unfortunately it’s mostly surrounded by people who cannot put down their mobile device and focus in the person or task they are engaging with. Presence to me is focussing in on a task, something that has definitely made me a better runner, and something I’ll continue to investigate as I delve deeper into my PhD.

CK: Having just run a big personal best in the half-marathon, are the waters now muddied in your decision making process considering earlier this year you ran the 800-metres in 2:02.90 and the 1500-metres in 4:07.08?

SG: The plan is still to focus on the middle-distance track events. I love the 1500m, the challenge both with speed and endurance. I think I’d like to run a few more 5,000’s this year, but we will see where the indoor season takes me.

CK: How did the latter stages of the Rock ‘n Roll Half Marathon feel?

SG: I was really worried this morning that I was going to bonk, not the ‘glycogen has left you,’ but the ‘there is nothing left and you might fall down feeling’. I’ve never run that fast before at the start of a long race. About half-way I promised myself not to let the tether break between myself and the pack I was running with. I was behind Alistair, Shalane and Amy chasing along. With about a mile to go I kept thinking, ‘ok I’m tired, but just go; it’s almost over.’ So I was just thinking focus, sit in, relax, you can do this.

CK: Now that you have put out that new level of effort, does this change race strategies going-forward?

SG: Yes and no. In all races you have to do pace yourself. But in a 1500 if the pack goes and you don’t go with them you can get left behind and it can be really challenging to get back on and finish strong. I am learning to be better at pacing, to be better at trusting my training, and to push limits.

CK: Tactical errors in a four-minute race can be devastating, while in a half-marathon, you often have time to recover.

SG: Funny my boyfriend and I were talking about this before I left the other day. He is a cyclist and primarily races on the road. In a cycling race the first few minutes (either the start or just after the neutralization ends), there is usually a hammer fest, and it’s an important point in a race to spend ‘fitness tickets’ to make sure you are at the front of a race. Imagine doing this in a running race, going as hard as you can at the start?! I said it is pretty much the worst thing you could do in a running race. But in cycling you can recover on the bike, which is a little harder to do while running.

Pacing is so important, so to all novice runners, practice your pacing. For at least the first half of your race (10K, half and marathon), it should feel relatively easy. And don’t let your brain play games with you, tell yourself to relax and to trust your training, it goes a long way.

CK: You have had a big year; can you take me through your Toronto Pan Am Games experience?

SG: Pan Am Games in my backyard was awesome. The York University track was where I ran my first track race, a 1500m actually, when I was in grade seven. Of course that was on the warm-up track.

There was a lot of negativity in Toronto before the games, the potential traffic headaches, the influx of people, etc. When the games started, Toronto fell in love with the experience and the majority of people started to attend events and celebrate the Canadian successes.

When I qualified in Portland on the final night, it was a rush of emotions, ‘this is happening,’ and ‘Whoa, everyone I know will be watching, in the stands.’

The night of the race is a moment I will never forget, not just because someone knocked my shoe off in the first ~120m, but standing on that podium was surreal. It’s not every day you stand on the podium in your own country. It was amazing, made more magical because my family was there to see it all live.

CK: How would you describe your relationship with Oiselle?

SG: Oiselle is amazing, not just for their support of their elite runners, but for their desire to build a family of all kinds of runners. I received so many tweets, comments, and notes from fellow flock members; I am so happy to be part of such a supportive and kind community. Sally Bergesen has a vision for the brand and I am thankful to be a part of it as it grows.

CK: You wrote a blog post over a year ago about Rita Jeptoo’s positive A sample test for EPO. At that time you asked the questions, “Is she the only runner on EPO?” What are your thoughts a year later with over 30 Kenyan positives, the Russian debacle and now more recently 26 Italians suspended? Would you reverse it and ask, “who is actually clean?”

SG: Thanks for reading my blog! I was really new to the running scene last year and looking back, probably a little naive. I should not have called out Jeptoo, but at the time it was a very public conversation. I would not reverse the question, I am not bitter or cynical; I choose to live on the positive bias of life. All I can promise is that I will compete clean. If others choose not to, that’s their choice, one I will not support or condone.